As anxiety rises over potential tariffs from the United States, European Union (EU) trade ministers gathered Friday in the Romanian capital of Bucharest for an informal meeting. 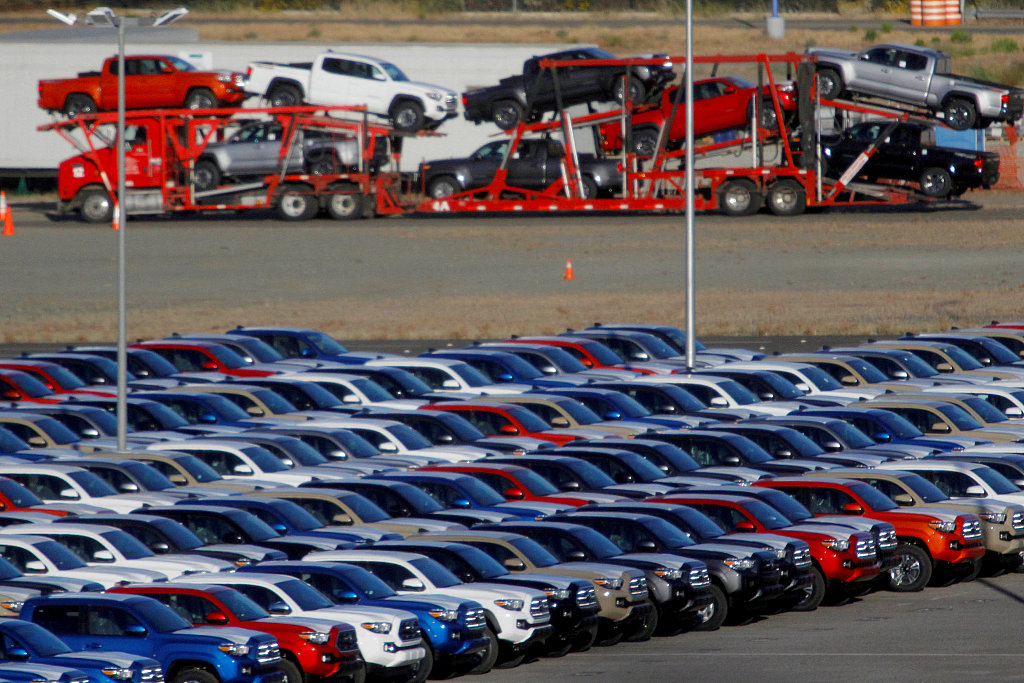 A report from the US Department of Commerce on the national security risks of auto imports, without its details disclosed, was recently submitted to US President Donald Trump who has 90 days to decide whether to impose special tariffs on imported cars and car parts, including those from Europe.

As the sword of Damocles hangs over the European automotive industry, the trade ministers discussed the bloc's trading relationship with Washington. European Trade Commissioner Cecilia Malmstrom has called on EU governments to decide soon to start negotiations with the United States.

She also warned "there is full support" from member states to hit back if the United States were to levy the tariffs, escalating the transatlantic tension.

The report laid on Trump's table re-triggered trade disputes over cars and car parts imported by the United States from the EU. It stems from the Section 232 investigation launched by the US Department of Commerce in May at Trump's request to evaluate the effects of imports on national security.

For the EU, it is not new that the United States uses so-called "national security" as an excuse to raise trade barriers. On the same excuse, the United States has since mid-2018 slapped tariffs on imported steel and aluminum from the EU.

"If we're serious about the transatlantic partnership, it's not very easy for me as German chancellor to read ... that apparently the Secretary of Trade says German cars are a threat to America's national security," German Chancellor Angela Merkel said at the 55th Munich Security Conference on Feb. 16.

"The biggest BMW factory is in South Carolina, not in Bavaria," Merkel underlined. She criticized the Trump administration of taking those cars as a national security threat, saying that "it's a bit of a shock to us."

The German Association of the Automotive Industry (VDA), which consists of more than 620 companies involved in production for the automotive industry in Germany, considers the assessment "incomprehensible."

"All this strengthens the United States and cannot be seen as a security problem," the VDA emphasized.

Trump has warned that the EU may face tariffs of up to 25 percent on cars exported to the United States if negotiation between the two sides fails in the coming months. This could be nothing else than to add insult to injury for the already struggling European automotive industry.

On a yearly basis, total car sales of Europe's largest carmaker Volkswagen declined by 1.8 percent in January, while sales of Daimler's core brand Mercedes-Benz declined by 6.7 percent compared with the previous month. Thanks to strong growth in China, deliveries of BMW increased slightly by 0.5 percent in January.

A report by Swiss investment bank UBS said European luxury carmakers such as BMW, Mercedes and Volkswagen's Audi and Porsche would lose about 90 percent of their high-profit-margin sales of imported luxury vehicles if the Trump administration were to impose permanent import duties of an additional 25 percent, given that more than half of vehicles imported from Europe to the United States in 2017 were luxury ones.

The tariffs will also put jobs at risk, impact consumers and trigger a reduction in US investments that could set the US industry back decades, the US Motor & Equipment Manufacturers Association has warned.

It also called on the Trump administration to unveil its report on Section 232 tariffs to mitigate the uncertainty and concern across the industry.

"We are clearly in favor of free trade. Our business models do require free trade," BMW CEO Harald Krueger said.

Some analysts have considered the secrecy around the US report on Section 232 tariffs as leverage which Trump likely intends to use in the US trade negotiations with the EU.

"We're trying to make a deal. They are very tough to make a deal with," Trump told reporters at the White House on Wednesday. "If we don't make a deal, we'll do the tariffs."

On the other hand, the EU was working on retaliatory tariffs that could hit US companies like Caterpillar, Xerox and Samsonite, according to media reports.

Should Trump renege on "his word" made in July not to impose any tariffs on European cars and car parts for the time being, the EU will no longer feel bound by its commitments to buy more US soya and liquid gas, President of the European Commission Jean-Claude Juncker told German media, adding that "I would very much regret that."

Trust between the United States and the EU has eroded since Trump took office and adopted an "America First" approach.

The US pullout from the Iran nuclear deal in May, of which the EU is a party, has shocked many in the EU.

Meanwhile, Trump has long been ripping NATO members that have not met the 2-percent benchmark on military spending and suggesting a US withdrawal from the military alliance between North American and European countries.

The US president in 2018 even labeled the EU as a "foe" and said it was "formed in order to take advantage" of the United States and that it is more an adversary than an ally.

Unlike his predecessors, Trump does not appear to see any value in America's relationship with the EU, said Julianne Smith, former deputy national security advisor to former US Vice President Joe Biden.