OPINIONS US terror report a distraction from woeful COVID-19 response

US terror report a distraction from woeful COVID-19 response 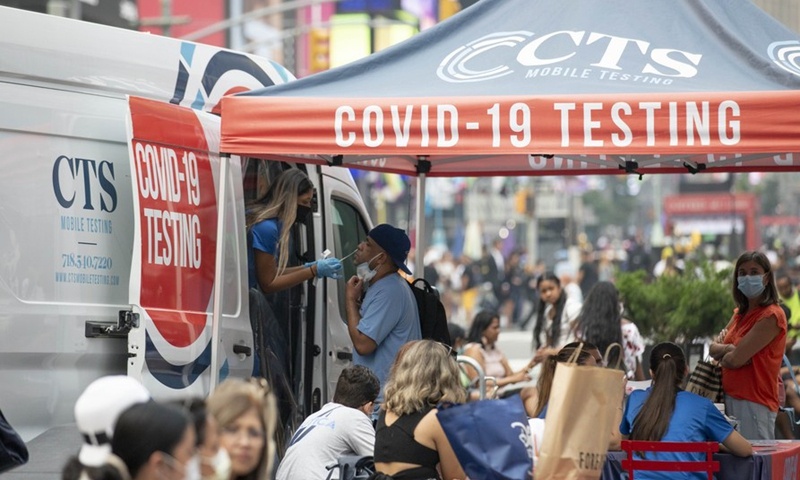 The US Department of Homeland Security issued its latest National Terrorism Advisory System bulletin on Friday, saying "Extremists may seek to exploit the emergence of COVID-19 variants by viewing the potential re-establishment of public health restrictions across the US as a rationale to conduct attacks."

The Delta variant continues to rage in the US. According to CNN on Saturday, the US has so far reported more than 1.5 million new cases of COVID-19 in August.

In the meantime, protests against US government's epidemic measures have been taking place. The Los Angeles Times on Friday reported that some parents in California are pushing back against mask mandates intended to keep their children safe against the spread of the coronavirus. Newsweek reported that hundreds of protesters gathered at the Oklahoma State Capitol on Saturday for a "Freedom Rally" against vaccine mandates. Anti-vaccine mandate demonstrators also appeared in several other states for planned demonstrations over the weekend.

With populism rampant in the US, the possibility of a repeat of events on Capitol Hill cannot be ruled out, Li Haidong, a professor at the Institute of International Relations at China Foreign Affairs University, told the Global Times.

How has the novel coronavirus brought such disorder to the US?

First, US government officials are negligent and US politicians have politicized the pandemic. Pivotal politicians, ranging from key lawmakers to former president Donald Trump, spared no effort to win the elections in 2020. They neglected their duty to curb the spread of COVID-19. Since US President Joe Biden took office, his administration has not been effective in fighting against the disease either. In the face of the epidemic getting out of control, the US government has irresponsibly passed the buck to China.

Second, there are some loopholes in the US' federal system. When encountering a crisis, the power of the federal government has been restricted. Some states are reluctant to do the right thing to combat the epidemic.

On August 3, Biden criticized Republican governors for banning mask mandates in public schools and other places. A day later, Florida Governor Ron DeSantis hit back. The state and the federal government blame each other, hindering an effective response to the epidemic.

Third, Americans advocate individualism. Many believe that mask and vaccine mandates and travel restrictions have violated their freedoms. Furthermore, the US is seeing anti-science and anti-intellectual thinking. Some of the public failed to realize the seriousness of COVID-19, and the effectiveness of these measures.

"The Homeland continues to face a diverse and challenging threat environment leading up to and following the 20th Anniversary of the September 11, 2001 attacks as well religious holidays we assess could serve as a catalyst for acts of targeted violence," noted the National Terrorism Advisory System bulletin.

Li said that by issuing a bulletin regarding terrorism at this time, the US may want to distract the public's attention from domestic discontent over the prevention and control measures against the new round of epidemic and the US government's unfavorable response to the epidemic to terrorism. The shift of attention cannot tackle the problems at all, but it will create new ones. At this critical time of battling the disease, if the US public's attention is diverted, prevention and control measures may be relaxed, which will accelerate the spread of the virus.

The US' mishandling of COVID-19 is related to US politicians' exploiting their political instrument to pass the buck to others and distract public attention. It is really a misfortune for Americans to have such politicians under their system.