US’ Tibet coordinator ‘a vain try’ 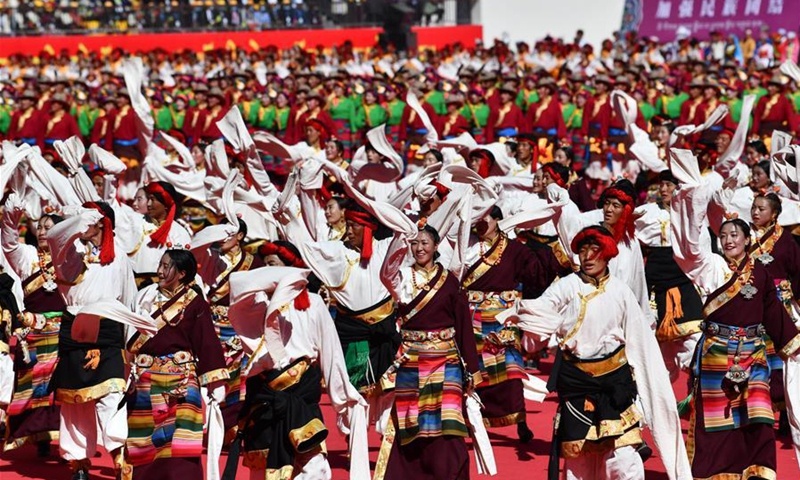 Dancers perform during a gala in celebration of the 70th anniversary of the liberation of Qamdo, in Qamdo City, southwest China's Tibet Autonomous Region, Oct. 9, 2020. (Xinhua/Jigme Dorje)

The US' appointment of a Tibet coordinator, a position that has been vacant since the start of President Donald Trump's term in 2017, is a vain try as China has never admitted the position nor will it have any contact with the "coordinator," a former senior official on Tibet affairs said.

The latest US provocations against China by playing the card on Tibet may be a preparation for further involvement in issues of the reincarnation of the Dalai Lama, but China will take all measures to protect its interests, Chinese officials and experts said.

US Secretary of State Mike Pompeo announced on Wednesday that Robert Destro, assistant secretary of state for democracy, human rights and labor, would assume the post as Special Coordinator for Tibetan Issues, according to a release from the US State Department.

"This is a vain try. China has always opposed setting the so-called 'coordinator for Tibet issues.' It has never admitted the position nor will it have contact with the so-called coordinator. As a result, Destro, like his predecessors, would never get the chance to visit Tibet," Zhu Weiqun, former head of the Ethnic and Religious Affairs Committee of the National Committee of the Chinese People's Political Consultative Conference, told the Global Times on Thursday.

The appointment of Destro aims to play the Tibet card to save Trump's presidency. It is useless to change the situation in Tibet, but only exposes the US' attempt to use Tibet separatists to split China, which will be resented by the Chinese people, Zhu said.

Chinese Foreign Ministry Spokesperson Zhao Lijian told a press conference on Thursday that the appointment is a political manipulation, and China will take all necessary measures to protect its interests.

The position as "special coordinator for Tibet issues" was established by the US Tibetan Policy Act in 2002, and the coordinator's work is to "promote dialogue" between the Chinese central government and the Dalai Lama. The post had been vacant since 2017.

Soon after the announcement of the appointment on Wednesday, Destro tweeted that "the deteriorating human rights situation and lack of religious freedom in Tibetan areas demand our attention," and he would work with Tibetans and "partners around the world to promote human rights and fundamental freedom for Tibet" in China and beyond.

Destro, who reposted fake news accusing China's policies in its Xinjiang region, has been criticized for his "long history of extreme opposition to women's and LGBTQ people's health and rights." When he was nominated by Trump to the State Department's Bureau of Democracy, Human Rights, and Labor, some nongovernmental organizations, including the International Women's Health Coalition, and critics said he was "a dangerous choice."

"Since its establishment, the so-called coordinator has been working to offer convenience for the Dalai clique and Tibetan 'government-in-exile' either in lobbying US politicians in passing bills related to Tibet, or even offering financial support for their separatist activities," Wu Xi, a professor with expertise on border areas from Southwest University of Political Science and Law, told the Global Times.

Wu noted that Trump did not appoint the coordinator at the beginning of his term in 2017 as he, as a businessman, attempted to attack China in the trade war. But he failed to gain the upper hand in the trade and technology wars with China, and is turning to play more on cards on China's Xinjiang, Tibet, Hong Kong Special Administrative Region and Taiwan island.

"By appointing the coordinator, Trump is creating new trouble for bilateral ties, which has sunk to a historic low."

The US' playing of cards on China's Tibet and other regions aims to serve its national strategy to contain China, but it has done this by using the human rights as an excuse. "Using hearsay, one-side stories and rumors to smear China, US accusations of China's so-called violations of human rights in these regions are never true or fair," Wu said.

Despite slander from the US and some Western media, China's Tibet has enjoyed a stable development in recent years. Wu Yingjie, Communist Party of China (CPC) chief of Tibet Autonomous Region, told a press conference on Thursday that the region has achieved a "major victory" in alleviating poverty. By the end of 2019, Tibet had lifted 628,000 people out of poverty and removed 74 county-level areas from the poverty list.

Experts also noted that given the age and health of the 14th Dalai Lama, by assigning the "coordinator," the US may make preparations for further getting involved in issues of the reincarnation of the Dalai Lama.

In January, the US House of Representatives passed "The Tibet Policy and Support Act of 2019," which proposes sanctions on Chinese officials involved in the reincarnation of the Dalai Lama. The US Foreign Affairs Committee on October 1 also approved a resolution "in support of Tibetan autonomy."

Chinese scholars slammed the US bill and its attempt to interfere in China's domestic affairs, saying that the reincarnation of the Dalai Lama has never solely been a religious issue, but also a political issue. Any attempt to split China is doomed to fail.

Zhu noted that after years of grassroots-level work with all ethnic groups in Tibet, the Chinese central government has made full preparations, and is confident in dealing with any situation and problem that outside separatist forces may create.