OPINIONS US to blame as recession risk looms

US to blame as recession risk looms

Warning signs of a looming recession in the US and other major economies continue to intensify, spooking investors into a widespread stock selloff in search of safe haven assets. There is one country to blame for what could be yet another disastrous economic crisis: the US, according to analysts. 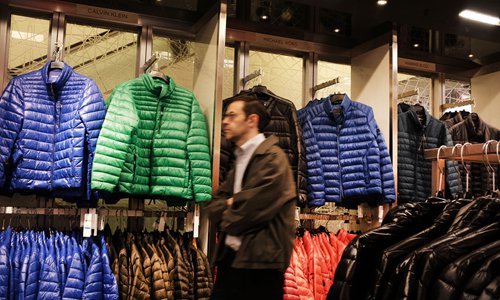 Chinese made clothes are on sale at a department store on May 7 in New York, the US. (Photo: VCG)

For China, a potential global recession could add more pressure to the country's already-slowing economy, but policymakers in Beijing have already prepared an array of measures from deepening reforms to adjusting monetary and fiscal policies to ensure stable growth ahead of a critical time as the country celebrates its 70th birthday.

The first warning sign for economic recession came from what's known as an inverted yield curve for US government bonds. For the first time since 2007, which was even before the global financial crisis in 2008, the yields on short-term US Treasury debts exceeded those of long-term ones, a sign of shrinking investor confidences in the short-term prospects of the US economy.

These numbers led to a major rout on Wall Street. On Wednesday, the Dow Jones Industrial Average lost 3.05 percent, the worst drop of the year, while the tech-heavy NASDAQ index fell 3.02 percent and the S&P 500 dropped 2.93 percent. Stocks in Europe also tumbled.

Many analysts have blamed the looming recession on protectionist trade policies from the US led by President Donald Trump, who has launched trade wars with almost all major economies, though the most costly one is with China. Many have started calling it the "Trump recession."

"The escalating trade war has led to financial market volatility and has constrained investments," Wang Xiaosong, an economics professor at the Renmin University of China in Beijing, told the Global Times on Thursday. Wang said that things could get worse for the US economy, if Trump follows through with his decision to impose a 10 percent tariff on $300 billion worth of Chinese goods.

In another blow to the US economy, China on Thursday said that it had no option but take "necessary countermeasures" against the US decision, though it did not provide further details about the potential measures.

Though these troubling developments have not been felt in China so far, a potential recession in major economies will add to the slowdown pressure for the Chinese economy, with areas such as foreign trade likely to take further hit, analysts said.

In a rather comforting sign, the Chinese stock market on Thursday shrugged off the negative impact of the stock routs in the US and Europe, with the benchmark Shanghai Composite Index gaining 0.25 percent and the smaller Shenzhen Component Index edging up 0.48 percent.

Fresh economic data showed that the Chinese economy remained in what officials call a "reasonable range." In July, although growth in industrial profits and retail sales slowed slightly, export growth picked up 2.6 percentage points to 5.7 percent, according to the National Bureau of Statistics (NBS). The job market, services sector and fixed-asset investment also remained relatively stable in the month.

However, top Chinese officials have also acknowledged potential risks for the economy. At a meeting on July 30 about economic work in the second half of 2019, top leaders said that the Chinese economy faces "new risks and increasing downward pressure" and called for "holistic efforts" to maintain stable growth, according to Xinhua.

The efforts include measures to support private enterprises, carrying out structural reforms and further opening-up, and pursuing proactive fiscal and prudent monetary policy, Xinhua reported. This more balanced approach is vastly different from the 4 trillion yuan ($590 billion) stimulus packaged used to cope with the global financial crisis in 2008.

"China has the ability to counter risks and keep economic growth relatively stable and above 6 percent," Chen Wenling, chief economist with the China Center for International Economic Exchanges, told the Global Times on Thursday. Chen said that the most important thing for China is to manage expectations and improve confidence, especially in the financial market.