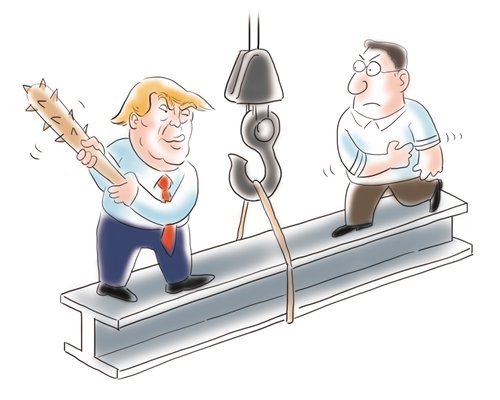 Stocks fell sharply after the US President Donald Trump administration threatened to launch a trade war against China, showing how trade conflict hurts the world economy. The Organization for Economic Co-operation and Development, the West's leading economic think tank, warned that a trade war prompted by US protectionism threatens to derail the ongoing global economic recovery, currently in its best position for seven years. The International Monetary Fund warned earlier that Trump's tariff policy would damage the US economy as well as America's trading partners around the world. US Federal Reserve Chairman Jerome Powell also said the Trump administration's trade policy has become a growing concern among Federal Reserve members.On March 21, an op-ed on the Financial Times said, "Trump's trade war with China could be like invading Afghanistan, a quagmire through the ages." What's more, Europe, Japan and other countries may also pay the price.China is not the only target of Trump's trade policy. French President Emmanuel Macron and other EU leaders said they would not be blackmailed by Washington and the European Commission has started a retaliation process against US tariffs. US allies Canada, Japan and South Korea are also unsatisfied.As an anti-establishment figure, Trump once said to White House Chief of Staff John Kelly that he felt stymied by the globalists in his orbit. For the past year, Republican politicians have made efforts to prevent him making reckless decisions on trade policy, including ideas like scraping the North American Free Trade Agreement. However they failed.Out of strong opposition to Trump's tariff policy, Gary Cohn, former Goldman Sachs president and a committed globalist, resigned as top economic adviser. To avoid being sacked, his successor Larry Kudlow only wants to obey Trump and implement the "America First" principle. Hawkish forces, represented by US Trade Representative Robert Lighthizer and White House trade adviser Peter Navarro, have enormously increased their presence in decision-making circles.As more White House staff are replaced, uncertainty pursues US diplomacy. It appears that the US president does not sweat the details and the consequences of his policymaking. Although many inside the US want a tough policy toward China, they do not like a trade war harming the US. President of the US Chamber of Commerce Thomas Donohue said in a statement that "simply put, tariffs are damaging taxes on American consumers." Forty-five US trade associations representing some of the largest companies in the country have urged Trump not to impose tariffs on China, warning it would be "particularly harmful" to the US economy and consumers. The organizations said in a letter to Trump that potential tariffs on China would raise prices on consumer goods, kill jobs and drive down financial markets. They will reduce US competitiveness in the long term.Soybean producers in the US fear China will retaliate against the nation's agriculture sector. Some analysts expected China to import 100 million tons of soybeans during the 2018-19 market year. China is the top importer of US soybeans and related products, and US agricultural exports to China represent about $20 billion annually for American farmers. Apart from tariffs, the Trump administration is going to impose restrictions on Chinese investment in the US and student visas. It is believed that the investment from China has created hundreds of thousands of jobs. The US has a global trade surplus in education. Chinese students in the US account for roughly one-third of the 1.1 million international students enrolled at American universities in the 2016-17 academic year. China has tried hard to prevent the trade war and Beijing promised it will open even wider to imports and investment. However the Chinese people's anger has been sparked. The world's second largest economy will not be blackmailed and just like Cui Tiankai, Chinese ambassador to the US said, "If a trade war were initiated by the US, China would fight to the end to defend its own legitimate interests with all necessary measures."It is hard to achieve Trump's demand for a $100 billion cut in China's trade surplus with the US by only reducing imports from China. The US should end its restrictions on high-technology products and attract more Chinese enterprises to set up factories in the US. However, the US has labeled China a US strategic competitor and its increasingly hawkish decision-making circle is creating obstacles for both countries.