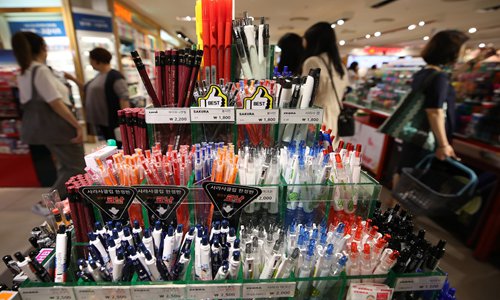 A view of Japanese stationery displayed in a store in Seoul, South Korea on Wednesday (Photo: VCG)

Even as the world is worried about the US trade war with China and other countries, there is another potentially consequential commercial battle brewing between two other major economies in Asia.

Tensions between South Korea and Japan are running high, after Tokyo vowed to impose new restrictions on high-technology exports to South Korean companies, citing "significantly undermined" bilateral trust. The move has drawn harsh criticism from Seoul, where President Moon Jae-in warned on Monday that South Korea will retaliate if Japan carries out the curbs.

It should not be hard to see that Japan's decision to take restrictive measures in trade to address political goals resembles what the US has been doing. Last month, the US announced that it would slap tariffs on all imports from Mexico if the latter does not help the US address immigration issues on the border.

With the move, though later withdrawn, the US, which still wields considerable influence on the global stage, effectively opens the door for other countries to take such a lose-lose approach in handling disputes with other countries.

Since 1995, despite many shortcomings, the multilateral WTO mechanism is where members have gone to solve trade disputes, and countries would in most cases abide by rulings by the organization. Most countries would never use trade protectionism as a geopolitical tool. Free trade has brought countries, even those with longstanding feuds, together.

But since US President Donald Trump took office, all that has changed. With disdain for the multilateral trade system and unfounded belief that the entire world is taking advantage of the US, the Trump administration has launched or threatened to launch trade wars with practically all major economies.

The US, which played a leading role in creating the global multilateral system, has become the troublemaker for global trade and trailblazer for a new uncertain era of protectionism and anti-globalization. Many who have not dared to use trade as a geopolitical weapon now see a green light. Others who still support free trade now have no option but to resort to similar moves in defense.

Since the US launched trade wars with China and other major economies, there have been many analyses of the impact on the respective economies and on the global economy. Some results paint horrifying pictures.

Still, short-term losses in global output could be minimal compared with the long-term impact the US administration's protectionist moves have had on the global trade system. If the US actions are left unchecked, it could plunge the world economy into abyss that could take years or even decades to repair.