OPINIONS US trick of shifting blame to China sure to backfire

US trick of shifting blame to China sure to backfire 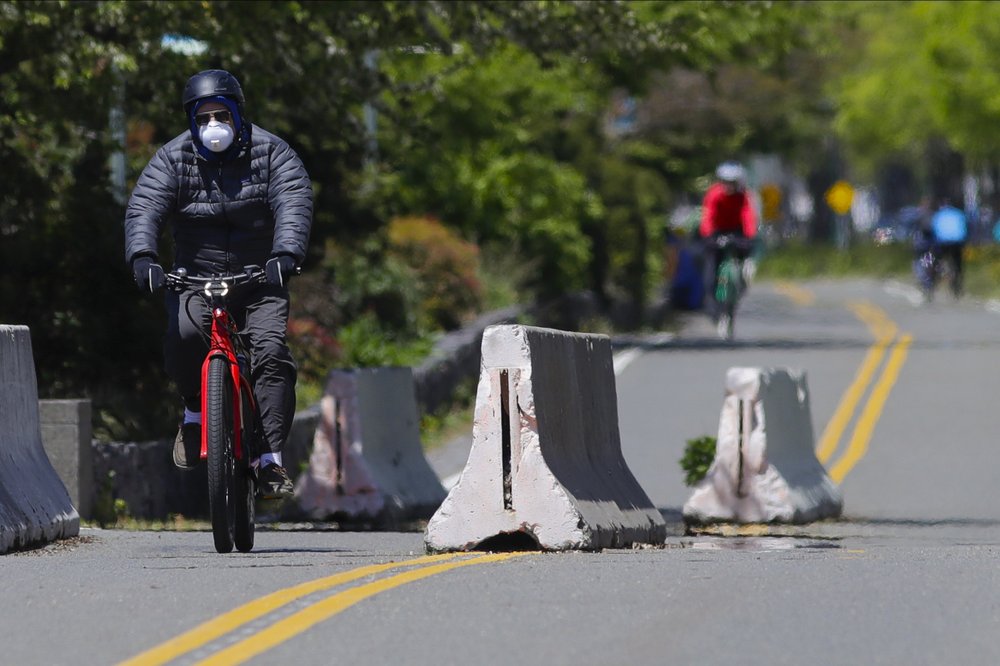 A man rides a bicycle while wearing a protective mask during the coronavirus outbreak along the bike path of Hudson River Park Tuesday, May 12, 2020, in New York. (AP Photo/Frank Franklin II)

US politicians have tried every trick in the book and intensified their efforts to attack China as the novel coronavirus disease (COVID-19) situation becomes increasingly severe in the US.

Like octopuses emitting toxic ink as soon as they encounter a threat, US politicians are using their poisonous ideas to shield themselves, besmirch China, and muddy the entire world.

However, as the saying goes, "A clean hand wants no washing".

At the beginning of its fight against the novel coronavirus, China determined that it would pool nationwide efforts to prevent and control the spread of the virus as a guiding strategy. It saw nationwide mobilization and participation as the fundamental guarantee of victory in this people's war against COVID-19.

The country has formed dense information networks that cover Chinese central government and local governments, metropolises and small villages, as well as neighborhoods and communities.

In addition to this, news conferences, press briefings, and meetings on COVID-19 held at various levels across the country have been using live broadcasts to report on the latest epidemic situation. These channels are also being used to spread knowledge on epidemic prevention and control among the public in the most authoritative manner, disseminating the most accurate information at the greatest speed.

As a result of the openness and transparency the country has shown in its efforts to fight COVID-19, the battle between this country of 1.4 billion people and the disease has become a "live broadcast" that everyone can see, hear, take part in, and interact with.

At the same time, China's battle against the pandemic has also become a highly transparent "public class".

The country reported the outbreak of pneumonia of unknown cause to the World Health Organization (WHO) on Jan 3.

On Jan 8, an expert team from the National Health Commission (NHC) identified a new coronavirus as the cause of the epidemic. The next day, China informed the WHO about the epidemic and shared with the organization its initial progress in determining the cause of the viral pneumonia in Wuhan.

On Jan 11, the Chinese Center for Disease Control and Prevention (CCDCP) uploaded five whole genome sequences of the novel coronavirus on its website.

On Jan 12, CCDCP submitted to the WHO the whole genome sequence of the novel coronavirus (2019-nCoV).

The country has unreservedly offered all it has to the world during this "public class" through multiple channels.

Incomplete statistics have shown that Chinese experts and scholars have held more than 70 online video conferences with their counterparts in over 150 countries and international organizations.

As of April 18, China had dispatched medical expert teams and work groups to 18 countries to help with their COVID-19 fight.

In addition, Chinese envoys and diplomats stationed abroad have been broadcasting live around the world China's battle against the COVID-19 through various media channels, doing their best to promote international cooperation on epidemic prevention and control.

The facts show that the openness and transparency of China's fight against COVID-19 is unprecedented in the history of mankind's fights against global pandemics of infectious diseases.

In contrast, during the 100 days when the number of confirmed COVID-19 cases surged from one to 1 million in the US, what have the US federal government and its politicians done besides bragging, scapegoating others, and showing their ignorance of science?

How have they treated US whistleblowers Dr. Helen Y. Chu and Captain Brett Crozier, and countless medical workers?

Why has the information on Florida already having 171 infected cases in January simply disappeared?

Why was the main biological warfare laboratory at Fort Detrick, which the US media called "the center of the US government's darkest experiments", suddenly shut down? What kind of shady tricks took place there?

How much more truth has been concealed by US politicians?

More than 1 million people in the US have become infected with COVID-19 and tens of thousands have died over the past months, but the US government has never put forward a systematic and comprehensive strategy for the prevention and control of the pandemic, or told the American people and the international community the truth about the outbreak.

At every press briefing on the pandemic, US politicians have steered clear of crucial points. They have either attacked their political opponents, rebuked experts, picked on journalists, or attempted to shift the blame.

Where's the transparency they have always demanded? What have they been hiding?

China's "live broadcast" of its battle against COVID-19 has nailed the lies and stories cooked up by those who have been racking their brains for ways to attack China and exposed their true colors to the whole world.

When people see the acts of those US politicians who have chosen to ignore China's highly transparent "public class", they don't even know if they should tell them to take off their "tinted spectacles" or put their hands on their hearts and ask themselves if there's any conscience or morality left there.

Upholding the fundamental principle of putting people first, the rule of seeking truth from facts, and the criterion of seeing the virus as the common enemy of mankind, China will carry the "live broadcast" of its war against the COVID-19 pandemic through to the end.

This is the question. Can the US government put its fight against the pandemic on live broadcast? It's not too late to start.

US politicians, please answer the question.