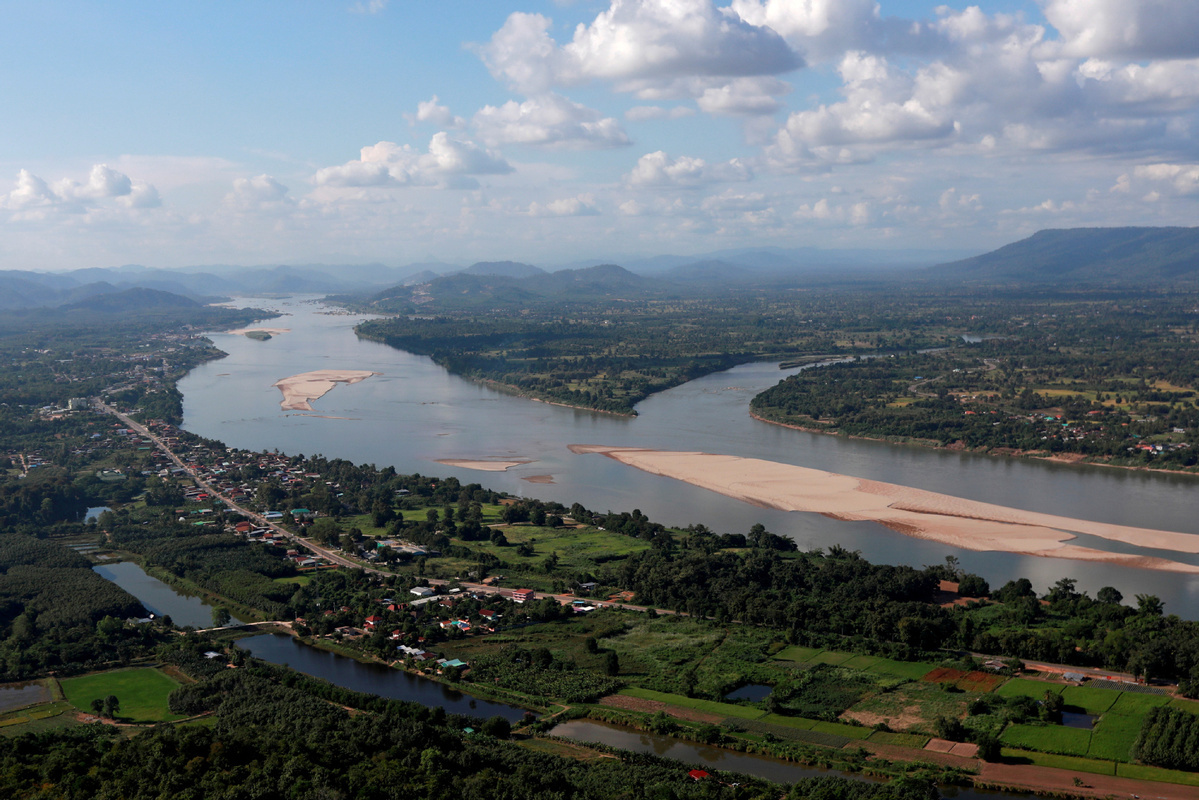 A view of the Mekong river bordering Thailand and Laos is seen from the Thai side in Nong Khai, Thailand, Oct 29, 2019. (Photo: Agencies)

US Secretary of State Mike Pompeo issued a statement on Monday claiming China, by blocking the Lancang-Mekong River upstream has caused droughts in the lower reaches of the river and its large-scale dams have caused environmental disasters in the region, so the Mekong countries need a "good partner" like the United States.

The Lancang-Mekong River flows through China, and Laos, Myanmar, Thailand, Cambodia and Vietnam, with the section in China called the Langcang and the rest called the Mekong.

The management of trans-boundary rivers has always been a complex and sensitive issue, and some scholars think this could lead to "water wars" or "water conflicts" may arise among the riparian countries. The Lancang-Mekong River flows through six countries with a total length of 4,909 kilometers, so its development and management remain particularly complex.

However, thanks to the joint efforts of the six countries, and despite the rare differences, no major water-related conflicts have emerged in the region. This is illustrated in the recording, coding and statistics of the Trans-boundary Freshwater Dispute Database on water conflicts and cooperation in the Lancang-Mekong region since 1950. This is in stark contrast to river management cases in the Middle East, Africa and other regions. It is not very different from the trans-boundary water management between developed countries such as the US and Canada either.

For better coordination and management of cross-boundary water resources, the US and Canada signed the Boundary Waters Treaty way back in 1909, and have also set up the International Joint Commission. Still the two countries have had to endure more than a century of wrangling and tackle over 100 potentially contentious issues.

In recent years, with the active push of the Lancang-Mekong cooperation mechanism, the development and management of the river's water resources is becoming a reality. Under these circumstances, as a major country outside the region, the motive behind the US' exceptional concern over the Lancang-Mekong River smells of ulterior motives.

China's positive role in the development of water resources in the Lancang-Mekong River has been acknowledged by the other five countries. As an important mechanism for managing resources in the lower reaches, the Mekong River Commission has tried to clear the misunderstanding about China's role by issuing data and reports, and giving media interviews, emphasizing that the droughts in the region are caused by extreme weather conditions rather than China's construction of dams on the Lancang.

The commission appreciates China's long-term implementation of emergency water replenishment in the lower reaches of the Mekong River in "dry years" such as 2016 and hydrology information sharing, saying China is an active participant in and contributor to international cooperation on Lancang-Mekong water resources.

Of late, the US has been trying to change the "status quo" of the Lancang-Mekong River management through behind-the-scenes manipulations, and turn it into another "South China Sea" between China and Southeast Asian countries.

In April this year, the so-called investigation report sponsored by the US was an attempt to interfere in the mutual trust-based cooperation between China and the Mekong countries, by claiming that the rainfall in the Lancang River catchment area in 2019 was no less than in previous years, but the volume of water flow from China to the Mekong countries in the lower reaches was much lower. The report claims to have got the "data" by calculating the "surface humidity" in China's Yunnan province.

Yet, surprisingly, the report acknowledges there is no evidence to show China pumped or "redeployed" water in the Lancang River, saying it would be easy to spot if China did so.

The US was the first country to vigorously promote the development of hydropower in the Mekong region, but in recent years it changed its policy and began casting doubts over hydropower development in the region.

With the launch of hydropower development projects in the five Mekong countries and the huge market demand for power grids and other infrastructure construction, the US and Japan formed the "Mekong Power Partnership" in August 2019 to promote private investment and cross-border energy trade in the region's power sector.

Given the US' ongoing efforts to decouple from China and the strained Sino-US relations, Washington's move appears highly suspicious. Otherwise, why would it fund regional agencies to compile and publish the so-called Lancang-Mekong River water resources report and hype up the water issue?

Southeast Asian countries, especially the Mekong countries, have been at the centre of great power games and therefore should realize that the US report attempts to create misperceptions about China. Piecing together data is easy for US agencies and politicians, but it is impossible for them to turn the Lancang-Mekong River into a "river of troubles" and force the countries that share the drinking water from the same river to confront each other.

The author is with the School of International Relations, Peking University.