OPINIONS US urged to readjust mindset on China

US urged to readjust mindset on China 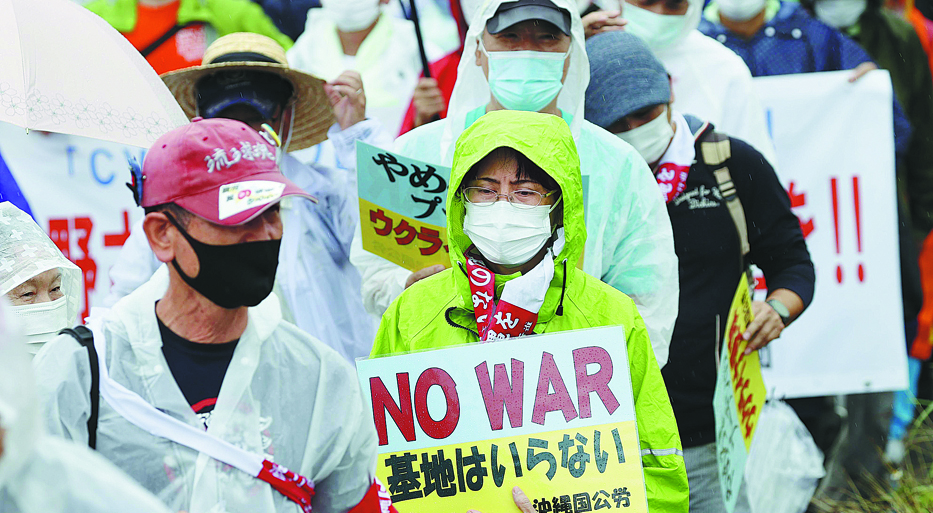 Residents take part in a rally outside a US air base in Okinawa Prefecture, Japan, on May 14, days before a visit to Japan by US President Joe Biden. (photo: GETTY IMAGES)

The US policy to define China as a "threat" and attempt to contain it through collective efforts is damaging to bilateral ties and will lessen the US' appeal among developing countries, analysts say.

Since early this year, the United States has taken a series of actions to push forward its "Indo-Pacific Strategy", which aims mainly at "competing with China" in various areas.

On June 5, US Deputy Secretary of State Wendy Sherman embarked on a nine-day trip to the Republic of Korea, the Philippines, Vietnam and Laos. Last month also saw the US-Association of Southeast Asian Nations Special Summit, US President Joe Biden's visit to the ROK and Japan, the Quad Leaders' Summit in Tokyo, and the launch of the Indo-Pacific Economic Framework, or IPEF.

In a speech on May 26, US Secretary of State Antony Blinken also comprehensively explained the Biden administration's strategy for China, outlining it as "invest, align and compete". That is, invest in US competitiveness, align with allies and partners, and compete with China.

Tian Dewen, deputy director of the Institute of Russian, Eastern Europe and Central Asian Studies at the Chinese Academy of Social Sciences, said that Blinken's speech appeared to be relatively moderate, with a posture that is less aggressive and bellicose compared with previous speeches by US politicians. For instance, Blinken said that Washington "does not seek to transform China's political system", "does not seek to stop China from growing their economy", "does not want a new Cold War" and "does not support Taiwan independence".

"But the US is actually saying one thing and doing another," Tian said. "Through its various moves, we can see that the US has formed a series of small groups, all without China, so that it can come back to the Asia-Pacific region and contain China's influence here."

He said that the US has a clear strategy toward China, but whether it can achieve progress is questionable. Whether it be the US-ASEAN Special Summit or the newly launched IPEF, the US actually does not offer many real benefits to the countries involved, it just uses these small groups or initiatives to isolate those who are not invited.

"However, as the world powers become more diverse, some countries may gain a more independent stance toward diplomatic ties, so using its hegemony to intimidate others may not always work for the US," Tian added.

An article published online on Thursday by The Diplomat said that, even before it was officially launched in May, the IPEF had "faced questions about what additional value it will provide for the region". Currently, it is too early in IPEF's development to provide a definitive assessment of its value, it added.

Following the Trump administration's decision to withdraw from the Trans-Pacific Partnership－a proposed trade pact among 12 countries－in 2017, how US policymakers work at home and abroad to manage the evolving value proposition challenge will be an important storyline in the IPEF's development, the article said.

S. Mahmud Ali, an associate fellow at the University of Malaya's Institute of China Studies, in Kuala Lumpur, said the US is constantly refining its China policy with a view to securing and indefinitely extending its primacy, if necessary, by conducting full-spectrum coalition campaigns against China.

"The fundamental objectives have not changed," he said, explaining that the emphasis on coalition or collective efforts to hem in China and cut the country off from the global economy, or to selectively reduce its global economic stature, is based on a growing recognition that, short of a major conflict with China, the US is going to find it difficult to slow the steady growth of China's comprehensive national power.

The US policy is "designed to erode China's capacity to challenge the US systemic primacy and force China to focus on the need to defend its own interests, thereby reducing China's potential to threaten US primacy", Ali said.

He added that the adversarial focus on China will deploy a lot of US resources to the nonproductive military and intelligence organs whose ultimate contribution to societal development－for instance reducing poverty and inequality－will likely be marginal. This China-focused policy will also reduce the US' appeal to many developing countries that do not share the "threat perceptions" driving US policy.

Xu Liping, a researcher at the National Institute of International Strategy, Chinese Academy of Social Sciences, said that the US knows it needs to cooperate with China but is also anxious about the country's rise. Though the US has not explicitly said it, it clearly defines China as a threat and "imagines it as an enemy".

Xu said that the US has recently formed a military, economic and security framework against China, hoping that this can help damage the environment surrounding China's development.

Regardless, he said, China should continue to stay open to the outside world, maintain its confidence and push forward mutually beneficial cooperation with other countries.

"The US has a sense of political anxiety, particularly over the pace of China's peaceful rise," he said. "Every American who comes to China can feel the country's development, such as in its infrastructure. The US should readjust its mindset toward China because a Cold War mentality will hurt it, too."

Nadhum Ali Abdullah, an expert at the Arab Forum for Political Analysis, said that China has always been a peace-loving country and stands against US hegemony with other countries, especially poor nations, while the US, regardless of other countries' interests, has been "trying to demonize anyone who stands in the way of its expansionist policies".

Abdullah said he believes that the US' actions will affect its relations with China and harm the global economy. "Washington should reflect on its China policy and correct its mistakes," he said. He urged the US to develop relations with China through the principles of mutual benefit and noninterference, and by acting in the world's best interests.