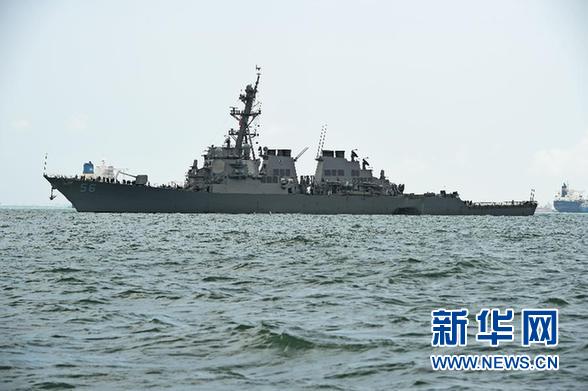 Washington sailed two US destroyers through the Taiwan Straits on Saturday, a gesture that many believe is directed at China-US ties and the Taiwan question. Increased trade tensions between Beijing and Washington and Tsai Ing-wen administration's constant provocations have put further strain on the cross-Straits situation. Now, Washington has put warships to the show in the West Pacific region.The Pentagon told the media last month that the country would sail warships through the Taiwan Straits, triggering a round of media speculations. It now appears that Washington has chosen a more discreet approach: It opted for sending destroyers instead of aircraft carriers at the weekend, no drills were conducted, and the US military hasn't officially announced the voyage.Since a vast stretch of the Taiwan Straits is considered an international waterway, Beijing cannot raise the issue if Washington's passage is uneventful.However, in most cases, the US is sending political signals by sending warships through the Taiwan Straits. Although this time Washington has remained relatively low key, the Taiwan administration has continued to issue statements. Apparently, the Democratic Progressive Party has been emboldened by Washington's gestures. International media has linked the passage with Sino-US tensions aggravated by the ongoing trade war,

while observers are concerned whether these tensions would spread to other fields.Beijing should stay strategically composed, respond to Washington's actions in accordance with international laws and China's interests, and avoid being misled by the Taiwan administration and Western public opinion.In the future, Washington may send larger warships to the Taiwan Straits, conduct military training and drills, and even collaborate with Taiwan's military in an attempt to deter the mainland.But Washington will not succeed. The mainland's military strength has improved greatly since the 1996 crisis and is capable of countermeasures to deter Washington and the Taiwan administration from provocations.PLA warplanes can make adjustments to the distances of their flight paths around Taiwan, cross the "middle line" and even fly over the island if necessary. US warships can pass through the Straits freely, but can also be sandwiched between PLA vessels.Politics between China and the US is sophisticated and subtle. As long as China remains capable and resourceful, it can take the lead in cross-Straits affairs. The Taiwan question is among China's core interests, and Washington will face great risks if it provokes Beijing over Taiwan. Meanwhile, the Taiwan administration should be aware that it cannot use the US warships in the Straits as tools against the mainland.