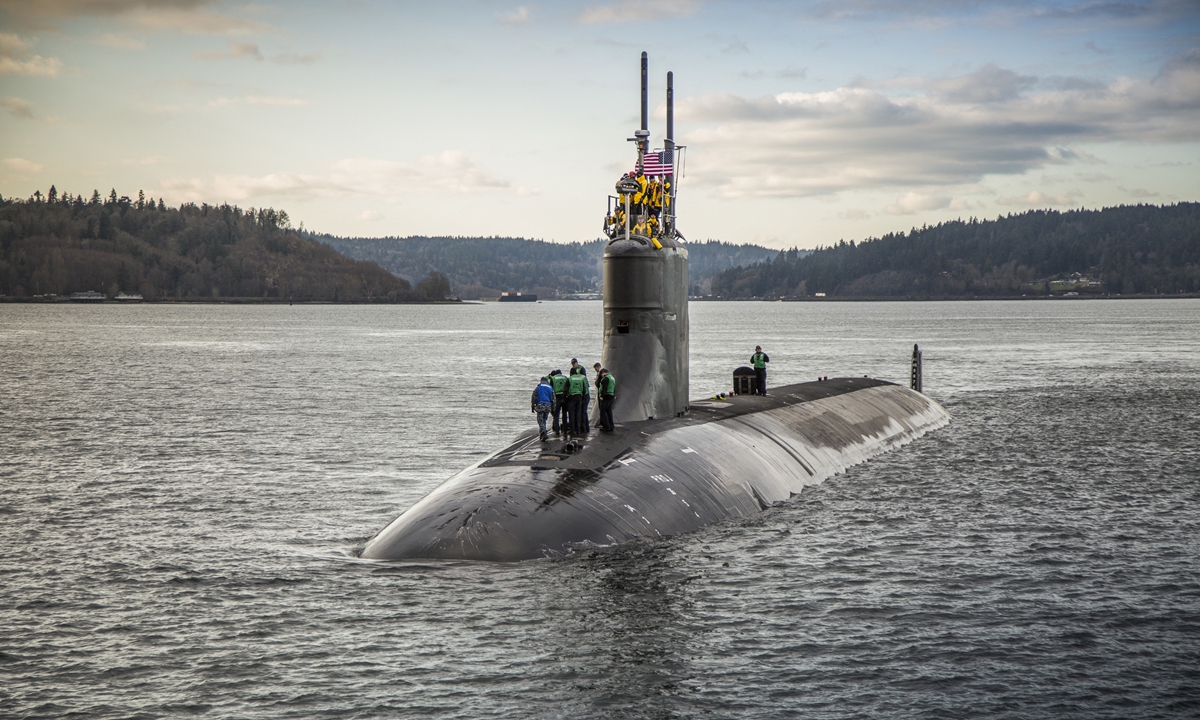 It has been more than three weeks since the USS Connecticut, a Seawolf-class nuclear attack submarine, suffered an underwater collision in the South China Sea early this month. However, the US is still keeping quiet about where the collision occurred and what the submarine had hit.

What is known is that the collision took place on October 2 and that the US took until October 7 to send out brief and vague information in its statement that the collision occurred "in international waters in the Indo-Pacific region." Later, the US confirmed through sources that the accident took place in the South China Sea, because the Connecticut later rose to the surface only about 40 nautical miles from China's Xisha Islands.

The USS Connecticut is the most advanced Seawolf-class attack submarine of the US, with its attack and reconnaissance capabilities being very powerful. What mission was it on when it quietly submerged in the South China Sea? How many times has it been here before? These questions are enough to stir the region deeply.

In addition, China collected an underwater drone released by the US military in the South China Sea in 2016. Given that the South China Sea is more than 8,000 miles away from the US mainland, the US has multiple military bases around the South China Sea, and they are suspected to have carried out intense submarine operations here. What on earth are they doing in this area? What exactly did the USS Connecticut collide with? Why did that happen? Does it have environmental consequences, and did it create hidden dangers? These are of great concern to the region.

We strongly appeal to the US to release the basic information of the accident immediately. As a great power, the US has the responsibility and obligation to do this. The USS Connecticut is a military one with advanced technology and great lethality. It is a nuclear attack submarine. It was submerged in the South China Sea and collided with an "unknown object." This was by no means "innocent passage." The submarine has caused tremors in the region and created tensions that the US needs to work on to calm.

The exact collision spot and what the submarine hit are information that the US must release publicly. Otherwise, it will mean that the US has done something unconscionable such as moves that violate international law and seriously infringe on other countries' interests in the South China Sea. Whether the collision caused nuclear leakage and environmental damage is directly related to the interests of the region. The US should give a credible answer while regional forces should verify it based on the information provided by Washington.

The international community is speculating what the USS Connecticut hit. The guesses include underwater reefs, abandoned ships, fishing equipment, and underwater vehicles or sonar devices that were deployed by the US itself. Nonetheless, people are waiting for the US' disclosure. The US is a great power outside of the region. It sent a nuclear submarine for operations in the South China Sea but refused to disclose what happened to its vessel in the collision. This is completely unacceptable.

The South China Sea is not the Caribbean Sea where the US Army comes and goes at will. There is no such hegemonic logic that regional countries can only bear the consequences without knowing the causes when an external power makes a mess.

Regrettably, the mainstream US media have remained silent this time. The mainstream media of other Western countries also tolerated the US military to make a fool of the international community with a tiny piece of news. Where is their ability to seek accountability and their investigation ability? Why do they turn a deaf ear to the US military's behavior of hiding the truth that obviously violates international rules?

We call on the international community to stand up and ask for an explanation from the US. The US has the most maritime military operations, which are also the most active ones covering all important waters worldwide. The US' attitude is that whatever the US Navy does is the rule. It does not accept any questioning and supervision. It is necessary for the international community to set rules for the US Navy's operations, and the first rule should be letting it carry out its due information disclosure and stop its actions under the table on major issues threatening other countries' security.

Affairs such as the nuclear attack submarine's collision in the South China Sea are not only the US military's own business. The concerns of regional countries are legitimate and reasonable. Their right to know should not be scorned. Therefore, the US military must answer the questions raised by all parties. The international society's supervision and demands will not stop until the US military gives an answer.