OPINIONS Vaccine passports must not be barriers to travel

Vaccine passports must not be barriers to travel

The draft legislation on developing a European "digital green pass" the European Commission has proposed means the bloc is coming closer to a "vaccine passport" that is expected to be issued in time for the annual travel season in the summer, and so help reenergize the depressed European travel sector and revive its economy. 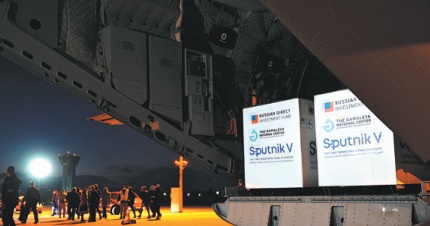 A shipment of Russia's Sputnik V vaccine awaits unloading at an airport in Kosice, Slovakia, on March 1. (PETER LAZAR/AFP)

The draft legislation on developing a European "digital green pass" the European Commission has proposed means the bloc is coming closer to a "vaccine passport" that is expected to be issued in time for the annual travel season in the summer, and so help reenergize the depressed European travel sector and revive its economy.

Similar to the health certificate for international travelers China rolled out on March 8, the EU "vaccine passport", which would link to vaccination certificates, and recent COVID-19 test results and/or documented evidence of previous recovery from COVID-19, would allow fully vaccinated travelers to bypass member states' mandatory quarantine and testing measures.

However, in stark contrast with China's readiness to realize mutual recognition of such health certificates with other countries and regions, the EU draft legislation states that only those inoculated with vaccines approved by the European Medicines Agency－vaccines developed by Pfizer, AstraZeneca, Moderna and Johnson& Johnson－will be able to get the digital green pass.

That means the Chinese vaccines that have been donated to nearly 70 countries and exported to 43 countries, including EU members such as Hungary and the Czech Republic, and other European countries such as Serbia, and vaccines developed by other countries will be very likely excluded from the EU's vaccine passport legislation. If so, its efficacy might be limited.

Also, even within the bloc, many member states complain about the fairness of the distribution of the limited amounts of vaccines, as they are not distributed according to the size of the needy population, but by a country's power and wealth. So it is fair for German Chancellor Angela Merkel to show her concerns that the vaccine passports will lead to discriminatory practices against the unvaccinated and those inoculated with vaccines other than those produced by the four companies, saying that "it will certainly be good to have such a certificate, but that should not mean that only those who have such a passport will be able to travel".

In other words, before vaccines can be fairly distributed in the bloc, the EU's vaccine passport might become a symbol of privilege; and before the European Medicines Agency approves vaccines from other countries, and the EU gives a green light to them for the passport, it will only be a short-range pass.

While calling for global solidarity in the fight against the novel coronavirus, and international coordination for post-pandemic recovery, the EU should show its faith in those calls by making the proposed passport a genuine pass for international travel.

A measure to facilitate travel against a common enemy should not become a new barrier based on narrow geopolitical calculations.