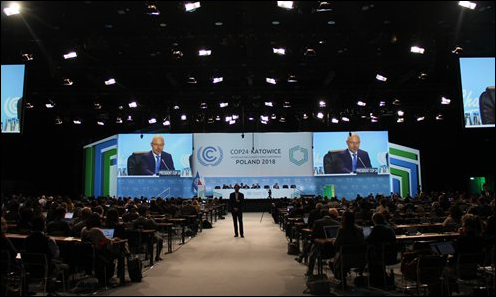 The two-week Conference of the Parties (COP24) is held in Katowice, Poland. （Photo：Global Times)

Mentioning the negotiation work, Sun Shao's eyes shine with excitement."I'm not only good at it," Sun told the Global Times proudly, stopping his work on his computer, "I can also learn about the latest scientific research achievements from top institutes on the conference."Sun is one of the 91 Chinese delegates at the two-week Conference of the Parties (COP24) to the United Nations Framework Convention on Climate Change in Katowice, Poland.It is the second time that Sun is negotiating as a Chinese delegate on climate change. His first time was in Bonn, Germany in May."I felt pressure at that time, because I was not familiar with the process. But now I enjoy it," Sun said.Born in 1989 in Beijing, Sun finished his PhD studies at the Beijing Normal University two years ago. He then joined the National Climate Center under the China Meteorological Administration."When I was a student, I always felt climate negotiation was a holy task, as you stand for your country on the international stage," he said.He was very relaxed chatting with this reporter at the office of the Chinese delegation, located in a deep corner of the COP24 venue, the Katowice Spodek.He talked fast when mentioning the complex professional jargon used in the negotiations, as well as the articles under negotiation. "You have to master what you are to negotiate," he said.According to Eco Business, 22,771 registered participants are attending COP24, with 13,898 people representing specific parties, 7,331 observers and 1,541 journalists. Guinea has the biggest delegation with 406 members.More than 32,000 people have participated in COP24, said Alexsander Saler, a UN climate change official, during a media conference.There are 91 delegates for China at COP24, according to the provisional list on the UNFCCC's website. The delegation is led by Li Ganjie, minister of ecology and environment, along with Xie Zhanhua, China's special representative on climate change.The delegates are officials and researchers from governmental departments, including the Ministry of Ecology and Environment, Ministry of Foreign Affairs, and Ministry of Science and Technology, together with experts from universities and institutes.The delegates vary in age. The Global Times learned from the Ministry of Ecology and Environment that the delegates were born from the 1950s to the 1990s. Many delegates in the negotiations were born after 1985. More than half of the delegates are women. The youngest was born in 1995, Sun said.To stand for China in international negotiations, the delegates need to make great efforts, even outside the conference. They also have to give up a lot in daily life and work.By December 21, the negotiations are supposed to be finished. However, according to the example from previous conferences, the ending of the negotiations may be delayed because the parties cannot come to an agreement. The delay could be several hours, or even days.During COP24, the Global Times talked to several delegates to find out about their lives as negotiators.

Sleep deprivedSeveral new sleeping bags and a row of bottled water were stored in the corner of Chinese delegation office.They are for the negotiators, who work late into the night during the conference.Sometimes the delegates cannot finish work until 2 or 3 am. Sometimes they have no time to sleep.The daily work of Chinese delegates starts early. At 7 am, the negotiators have their first meeting of the day. They must take a shuttle bus to the venue. This year, the journey from the hotel of Chinese delegation to Katowice Spodek takes about 40-50 minutes.The delegates, while on the bus, one by one explain briefly what they had negotiated in the conferences of previous day.Then after arriving at the venue, they check the time and location of negotiations they are responsible for, and prepare for them. By 4 pm, Sun has finished his negotiation work for that day."The daily negotiation takes four or five hours. But it is quite tiring, because you have to be highly focused," he said.However, as the conference nears the end, the work of the delegates becomes more intensive.Li Gao, head of the climate change office at the Ministry of Ecology and Environment, said in a previous interview with the China News Service that he slept for less than two hours in the last 72 hours of the Copenhagen climate conference in 2009. Another delegate, Pei Liang, said that his record was going sleepless for 40 hours in conference. It was in 2013 in Warsaw. The conference was delayed for one day as the parties could not come to an agreement on an expression. "I felt overextended," Pei said.Three years after the landmark 2015 Paris Agreement passed, the two-week COP24 needs to adopt the implementation guidelines of the Paris Agreement on how to carry out the accord fairly for all participating countries. Insiders all predicted quite long delays before the meeting ends.

Good reputationWhen talking with delegates, Liu's name is often mentioned."Go ask Liu Shuo, she's a 'big guy,'" Sun joked.However, the real Liu is small, slim and humble, and she is a woman.When this Global Times reporter met her in the Chinese office, she was reading on her laptop, with a coffee cup in her left hand and a tissue in her right hand. Her coat was thrown over her shoulder.Liu, from the Institute of Environment and Sustainable Development in Agriculture under the Chinese Academy of Agricultural Sciences, works on agriculture and climate change, including carbon reduction in agricultural areas."I have to spend lots of time to sort out the opinions of different countries or interest groups," she said. "Participating in climate change conferences takes a big part of my time.""My colleagues at my institute always say, 'Where have you been this time Liu Shuo? You are either abroad or on the way to apply for work abroad,'" Liu said."It is essential to keep the stability of the delegate team," Liu said in an interview with Chinese media, "so I insist on negotiating.""It is a great honor to make such a contribution for the country. I'm proud of this," Liu said.Liu's 3-year-old child has now got used to Liu being away. "My child can now remember where I went to. At this time I feel sorry for my family," Liu said.This year Liu has negotiated for China eight times. Sometimes the negotiations take around three weeks.Liu still remembers the first time she became a negotiator. She said she felt like someone who cannot swim being dropped into sea."It's like the experience of the Chinese delegation. We used to be in a passive position in negotiations. Now we can express our interests and join a process actively."

"We have two principles in negotiation. We cannot cause the failure of a negotiation. We cannot have results that are against the interests of China," Sun said.Guo Xiaofeng is a Chinese delegate from the office of climate change under the Department of Treaty and Law of the Ministry of Foreign Affairs. Guo has been engaged in negotiating climate change since 2007.With an education background in law and experience in negotiation, Guo implied that strategies are sometimes used in negotiation, and the delegates have been told to use a poker face when working toward negotiation results.Guo always wears traditional Chinese garments while negotiating. "It suits more to my identity, and it's more convenient without a tie. Moreover, it increases my confidence," he told the media.He said the main goal of negotiation on climate change is to provide a beneficial space for the country's development. In past years, the Chinese delegation has become an active participant and a contributing leader in negotiations, a shift from its previous defensive stance.China has been working together with many developed countries and playing a key role in promoting the implementation of the Paris agreement."No matter what the global society does, China's transition to reducing carbon emissions to confront climate change in economic development will go on," Guo said. "This is a necessary need of domestic economic development and caters to the global trend."