OPINIONS Vibrant and visionary agenda for two sessions this year

Vibrant and visionary agenda for two sessions this year 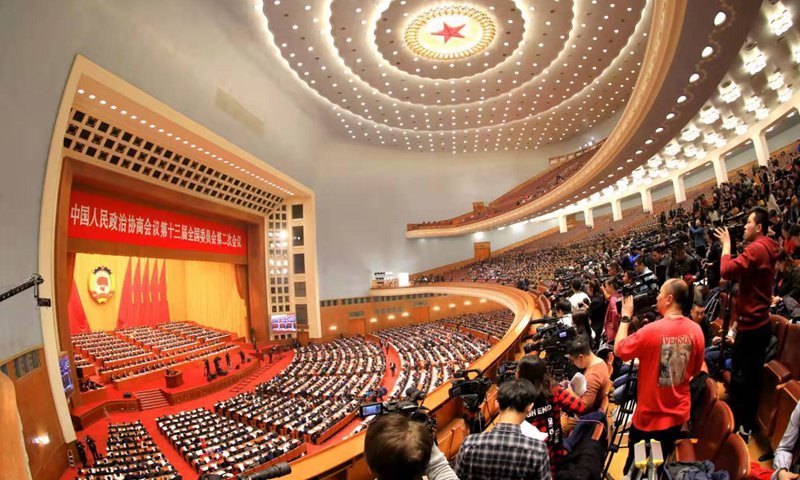 The 13th Chinese People's Political Consultative Conference (CPPCC) National Committee kicks off its annual meeting on Sunday at the Great Hall of the People in Beijing, marking the start of this year's two sessions - the annual meetings of the CPPCC and the National People's Congress, China's top legislature - the most important annual political event in China. (Photo: VCG)

It is that time of the year again, typically around March, for the two sessions to convene in Beijing. The phrase "two sessions" often conveys (especially to foreigners) the notion that China adopts a bicameral structure for its legislature. This is like the upper senate and the lower house of representatives in many other countries.

But that is actually not quite the case. The two sessions refer to the annual meetings of the National People's Congress (NPC) and the Chinese People's Political Consultative Conference (CPPCC). The NPC is China's unicameral national legislature where laws are passed and national policies formalized. On the other hand, the CPPCC is an official consultative body consisted of various political and specialized interests. It gathers and provides policy input for NPC's legislative works, but does not itself legislate.

A few years ago, I was privileged to have been invited as a foreign observer to CPPCC meetings in an administered municipality and a province, where I witnessed first-hand their methodological approach to seek out inputs for policy betterments. As a foreigner, I also shared my views on the need for China's policies to be constantly cognizant of global developments. Some Westerners view the two sessions as "ceremonial showcase." They apparently underestimate the importance and significance of the meetings.

Last year's national two sessions were postponed to May in response to the coronavirus outbreak which has raged both China and the world in earlier months. And for the first time in many decades, a growth target for gross domestic product (GDP) was understandably not set for China. The world was then - and still is very much - mired in the grip of the coronavirus pandemic, with many major economies having succumbed to negative growth last year.

But Chinese Premier Li Keqiang's government work report, delivered on Friday, was a sigh of relief perhaps felt by both the Chinese people and many foreign observers. Li said China aims to expand its economy by over 6 percent in 2021. This figure is ostensibly low in comparison to China's legendary two-digit growth in the past. But it is paradoxically lofty nowadays, as elsewhere in the world, even a hint of positive growth would have been much cherished.

As Li reported, a major accomplishment for China over the last decade was the eradication of absolute poverty throughout the vast nation. It is truly amazing for the world's most populous country to have comprehensively achieved this much yearned-for goal over such a short span of time.

But China apparently does not rest on its laurels. This year's two sessions are particularly crucial as they are supposed to set out the development agenda not only for the present year, but also for the next half decade. And the developmental momentum should continue until at least 2035, when China is supposed to reach a state of nearly developed society.

Indeed, as I understand from the work report, moving forward, improving the socioeconomic and environmental qualities would take center stage in China's development ahead. The Chinese leadership has emphasized in the past the importance for the people to be able to enjoy better livelihood qualities. And I see that socioeconomic targets set are no longer mostly quantitative ones. But they now include qualitative ones such as extension of health, educational, employment and even cultural and recreational coverage to most people.

It is, of course, also very refreshing to observe that China continues to take environmental preservation very seriously. It is further set explicit targets for green-energy usage and carbon-emission reduction. This is of course a far cry from the "development at any cost" mentality which is still in vogue in most of the developing world. China's sustainable growth model could help avoid many painful lessons in this regard.

And foreign observers like myself would, of course, zoom in on China's interactions with the world, especially on the economic front. After all, China is the world's second largest economy and trading nation. We look forward to China's revamping of its own economy and subsequent revitalizing the global economy in what has come to be known as "double-circulation" model.

We welcome China's continued commitment to trade and outbound investment under the Belt and Road Initiative (BRI). I take a personal interest on the new emphasis on trade in services, as in my opinion it goes hand in hand with what I consider to be the most important BRI goal - building people-to-people bond by means of more and better interactions. The agenda of the two sessions is indeed a vibrant one.

The author is a senior fellow at the Singapore Institute of International Affairs.