OPINIONS Victory over Islamic State may be short-lived

Victory over Islamic State may be short-lived 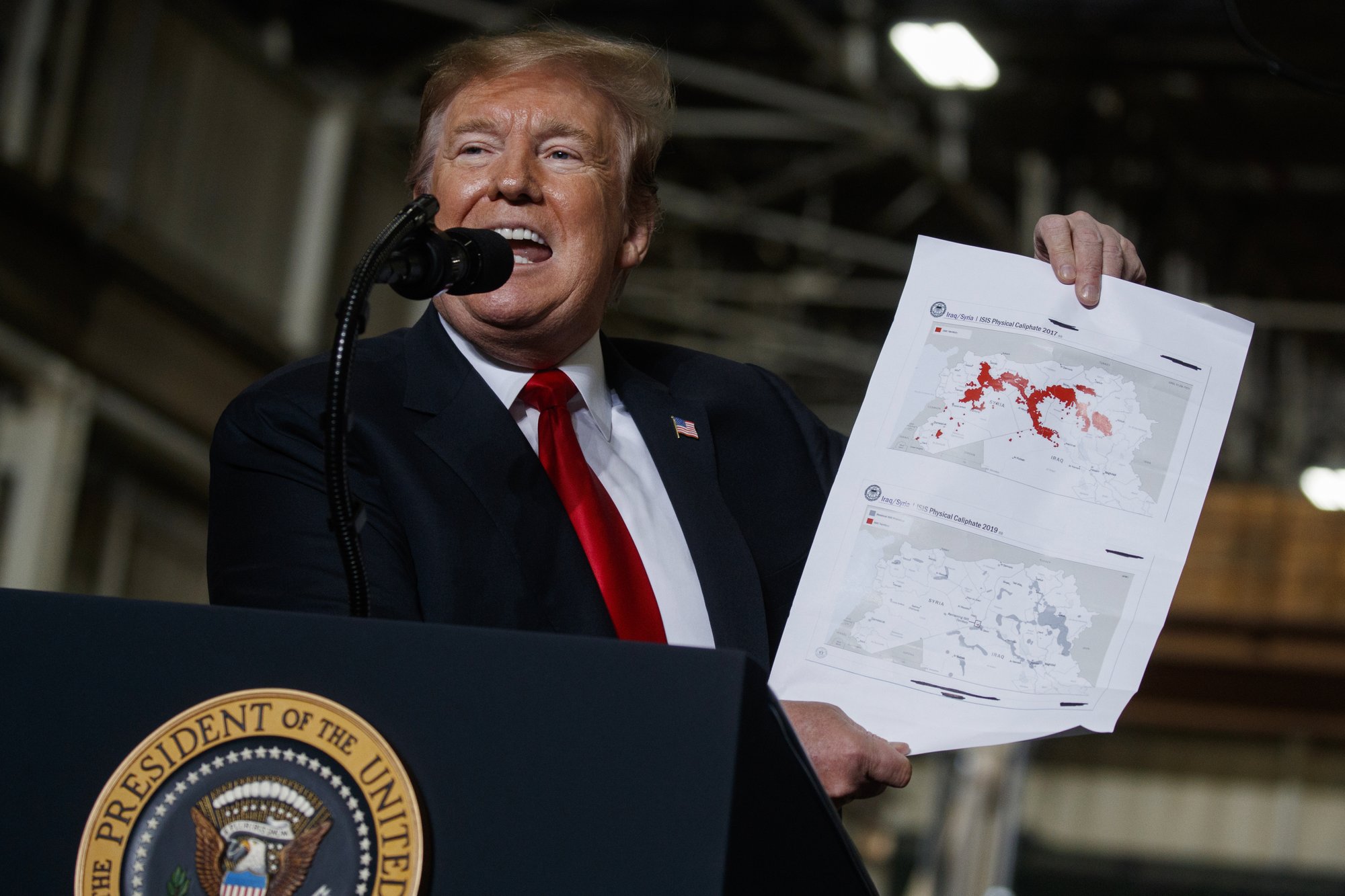 In a campaign that spanned five years and two US presidencies, unleashed more than 100,000 bombs and killed untold numbers of civilians, the US military engineered the destruction of the Islamic State group’s self-proclaimed empire in Iraq and Syria.

That’s a military success, but not necessarily one that will last.

The Islamic State group is down, but it is not done.

President Donald Trump on Wednesday flashed a color-coded map to illustrate what he called the imminent demise of IS in its last speck of Syrian territory. At its peak, in 2014-15, it controlled an area the size of Britain across Syria and Iraq and launched a series of extremist attacks around the world.

His suggestion of finality for the anti-IS struggle, however, seemed premature.

“The threat from radical Islamic terrorism remains,” Pompeo said. “We need to finish out the last few square meters there in Syria. Still work to do.”

If history is a guide, the reconquering of IS-held territory may prove a short-lived victory unless Iraq and Syria fix the problem that gave rise to the extremist movement in the first place: governments that pit one ethnic or sectarian group against another.

The US military has been through this scenario before. In 2001, after the Sept. 11 attacks on New York and Washington, the US invaded Afghanistan, ousted the ruling Taliban regime in a matter of weeks and installed Hamid Karzai as the country’s leader. The war seemed over. But the Taliban regrouped while Washington shifted its attention to Iraq’s Saddam Hussein, and by 2009 the top US commander in Kabul was calling the war a stalemate.

The US military is still in Afghanistan amid uncertain peace prospects.

The Iraq experience followed a similar path. The US military had seemingly conquered the Sunni insurgency in Iraq by 2011 after eight years of war. American forces departed, only to see sectarian tensions revive and provide an opening for Syria-based IS to take over large parts of Iraq in 2014.

As Army Gen. Lloyd Austin, architect of the plan for defeating IS in Iraq and Syria, put it in 2015, the majority of Sunnis in Iraq simply refused to fight for their government when IS swept across the Euphrates and took control of much of the country’s north and west.

“They allowed — and in some cases facilitated — ISIS’s push through the country,” Austin said. The reason for their complicity, though he didn’t say it, was a deep Sunni distrust of Shiite Prime Minister Nouri al-Maliki.

President Barack Obama sent small numbers of US military advisers back to Iraq in the summer of 2014, followed by an air campaign. This time a new approach was adopted: train and equip the Iraqis to do the fighting, rather than do the fighting for them. Thus was born a counter-IS strategy that ultimately prevailed in both Iraq and Syria.

The problem now is achieving the political goal of reconciling the rival internal groups in both countries.

Stephen Biddle, a professor of international and public affairs at Columbia University, sees a strong chance that IS will remain an insurgent threat in Iraq and Syria with an intensity that is likely to grow.

“If it gets worse, which it probably will, then I suspect that analysts in 2025 looking back on this will see the eviction of ISIS from its last contiguous territory and the associated American celebrations as yet another example of overly narrow, short-sighted reactions to secondary events,” Biddle wrote in an email exchange.

Thomas Joscelyn, a senior fellow at the Foundation for Defense of Democracies, a nonpartisan research institute, tweeted that the remaining IS presence in Iraq and Syria shows that it is not defeated.

“I’m not saying that ISIS is going to reach its peak power again,” he wrote. “Hopefully, the loss of its territory has helped discredit (somewhat) the idea of its caliphate. But ISIS still has resources and a significant footprint — especially in Iraq, but also in Syria.”

When the US military began its counter-IS campaign it focused mainly on Iraq, in part because Baghdad itself seemed in danger. The going was slow, and in May 2015 the whole effort appeared in doubt when Iraqi defenders were routed at Ramadi. The US defense secretary at the time, Ash Carter, questioned the Iraqis’ will to fight, but gradually the tide began to turn in their favor.

The Syria campaign also began slowly and was marked by startling setbacks. In September 2015, Austin, the commander of US Central Command, acknowledged during congressional testimony that despite hopes of putting several thousand US-backed Syrian rebels into battle against IS, they had managed only four or five.

But the effort gained momentum, and by early 2016 the US had recruited and organized what came to be called the Syrian Democratic Forces, which US special operations troops trained, advised and assisted. Despite new complications on the battlefield, such as Russia’s entry into the conflict, the campaign methodically recaptured IS territory and cut off the extremists’ lifelines.