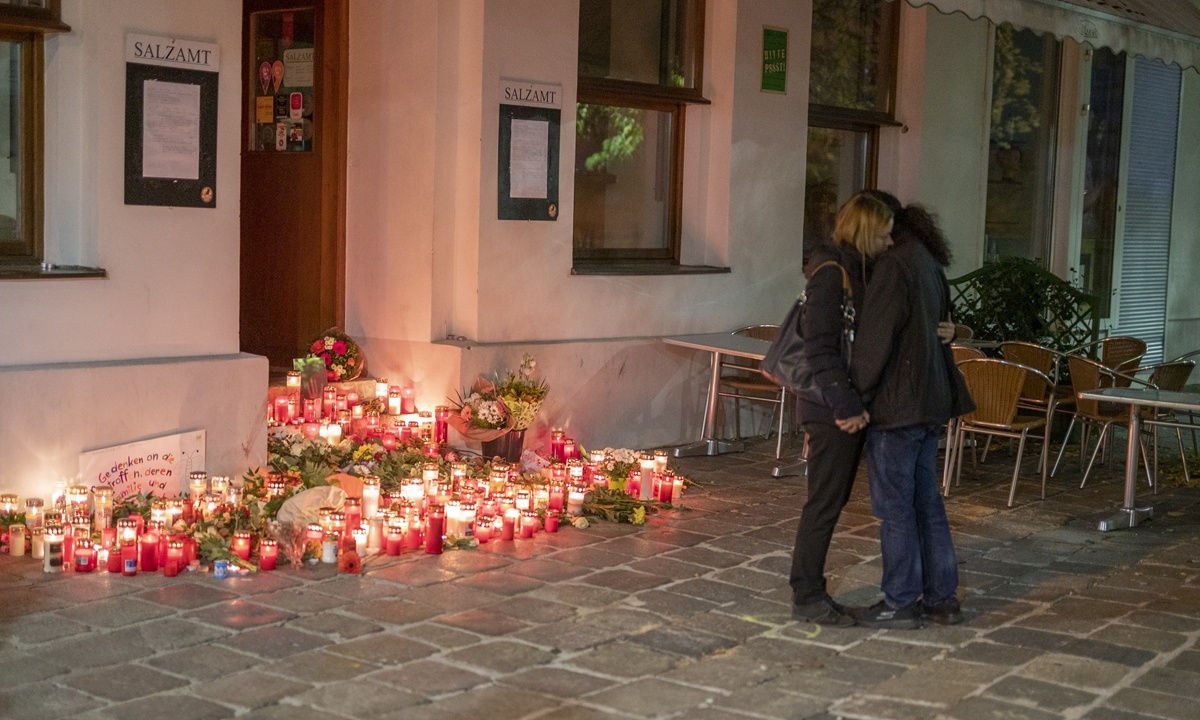 A couple is hugging in front of a restaurant, where the terrorist attack occurred, in Vienna, Austria on Wednesday. (Photo: AFP)

A shooting spree occurred in the Austrian capital Vienna on Monday evening, causing many deaths and injuries. The jihadist group - the Islamic State of Iraq and Syria - claimed responsibility for the attack in a following statement, saying that it was "part of the bill" because Austria participated in the US-led international coalition military operations against the Islamic State (IS).

Judging from the timing and method of the attack, this is a typical tactic of international terrorist organizations. Terrorists opened fire at six locations in Vienna, including a synagogue in the downtown area. They chose the last night before the lockdown due to the COVID-19 pandemic, aiming to kill more people. They shot at close range on the streets, with extreme cruelty.

Since the beginning of 2020, the government of every country has been busy coping with the novel coronavirus pandemic. Efforts of countering terrorism have undoubtedly been less of a priority. Europe is not alone. On the day of the Vienna attack and on October 24, there were two more attacks on educational institutions in Kabul, Afghanistan, causing more than 100 casualties.

Actually, security agencies have long warned that this global health disaster is likely to create opportunities for jihadists.

The pandemic has indeed provided terrorists with a respite.

First, the counter terrorism situation in the Middle East is not optimistic. Although IS lost its arrogance and physical territory a few years ago, its residual power is still a major threat to regional security and stability. Armed militants in Syria have not been completely eliminated. They will again use chaos to attack countries or regions seriously hit by the pandemic.

In March, the joint task force led by France, Spain, Germany and the Netherlands announced that they would stop training Iraqi security forces and withdraw some of their troops due to the pandemic. This has led to an increase in the number of terrorist attacks in Iraq, creating opportunities for IS to rise again.

Second, IS reunited after being broken up into parts. It has penetrated into Central Asia, North Africa and Southeast Europe, taking advantage of the pandemic to combine with local extreme forces. From the Middle East to Europe, from launching bloodshed attacks to increasing its "sense of existence" through social network sites, IS has recovered from their former weakened position.

Fourth, terrorists are likely to use the pandemic to create troubles. Some security experts have warned that the effects of the deliberate use of pathogens by terrorists may be astonishing. The damage it causes to human beings and the economy and society is far greater than "traditional" terrorist attacks. In May, the Council of Europe warned that the global COVID-19 outbreak may increase the use of biological weapons by terrorists in the future.

Of course, the novel coronavirus also poses certain restrictions on terrorist activities. In March, IS issued instructions to its "followers," which not only told them to wash their hands frequently and cover their mouths and noses when sneezing, but also asked them to temporarily stop their activities in Europe.

Even at the time of the outbreak, terrorism remains the biggest enemy in the world. The international community should establish a sense of building a community with a shared future, deepen practical cooperation and joint responses.

While China has done a good job with epidemic control, vigilance against terrorist threats cannot be slackened for a moment.

First, we need to adhere to the existing experience and practical systems of countering terrorism and disease prevention.

Second, we must remember that counter terrorism amid epidemic prevention need to be combined with security efforts in order to ensure long-term stability.

Third, China will need to cooperate closely with its neighbors with both anti-terror and disease control approaches. China should actively seek to crack down on foreign enemies and take timely measures to prevent terrorists from using loopholes brought about by the COVID-19 pandemic to incite and carry out terrorist activities.

Fourth, we need to prevent foreign terrorist forces from launching biochemical attacks by taking advantage of the pandemic. According to relevant laws, deliberately spreading coronavirus can be regarded as an act of "terrorism."

The author is counter-terrorism expert.