Vigilance needed against US economic terrorism 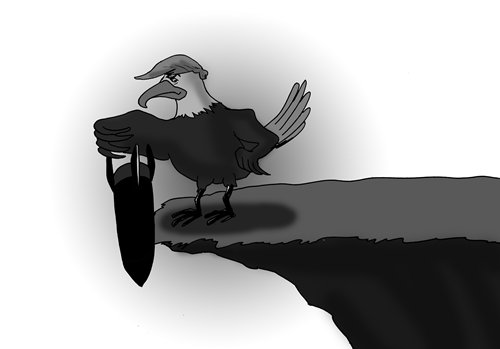 It is worth noting that the world today is full of uncertainties, with aggravated global public risks. The world economy is on the verge of becoming unbalanced and unsustainable. The gap between the rich and the poor has added to the risk, along with the indigenous shocks that come with technological advancement. Countries around the world should unite to cope with the risks. However, some countries, the US in particular, have been dragging others into deeper trouble by adopting economic terrorism.

Terrorism uses violence. Economic terrorism, without directly using violence, generates similar effects, if not worse. Moreover, economic terrorism has cast shadows on public security and the already uncertain situation worldwide. The panic led by economic terrorism has spread all over the world. It has caused shocks to global markets, especially the equity market. What the US has done runs counter to the idea of jointly dealing with public risks.

The world has become a community and China is actively participating and taking action on global governance. Jointly fighting lurking global risks is the only possible outlet.  Unilateralism will not lead countries anywhere. The recent moves by the US have revealed the country's unilateralism and show it is drifting further from the global community.

Globalization has taken effect on two levels. On the real economy level, globalization has created a supply chain that integrates global resource allocation and the division of labor. The supply chain has linked countries together and it is impossible for them to survive if separated. That is the reason behind the term "global village."

The other is on the financial level, in which globalization has connected the balance sheets of states, enterprises and citizens through creditor-debtor relations. The 2008 financial crisis quickly spread across the world because bonds of credit bind countries together.

At these two levels, the world has been brought together with a shared destiny. Some countries, even those as strong as the US, have not realized this, determined to get the lion's share by hurting others through threats and intimidation. This line of thinking will only jeopardize the world economy and the US.

Economic terrorism will magnify public risks through its random, unpredictable nature. Moreover, it undermines the existing global supply chain and financial system, making them more fragile and vulnerable to financial and economic depressions.

A panic could easily spread worldwide by altering people's anticipations. People would be likely to turn against one another, reinforcing the panic. This logic is present both in stampedes and financial crises.

Therefore, countries not only need to pay attention to moves by the US, but also need to understand these actions constitute economic terrorism. Countries must remain vigilant against this trend and jointly respond to keep the world in order.