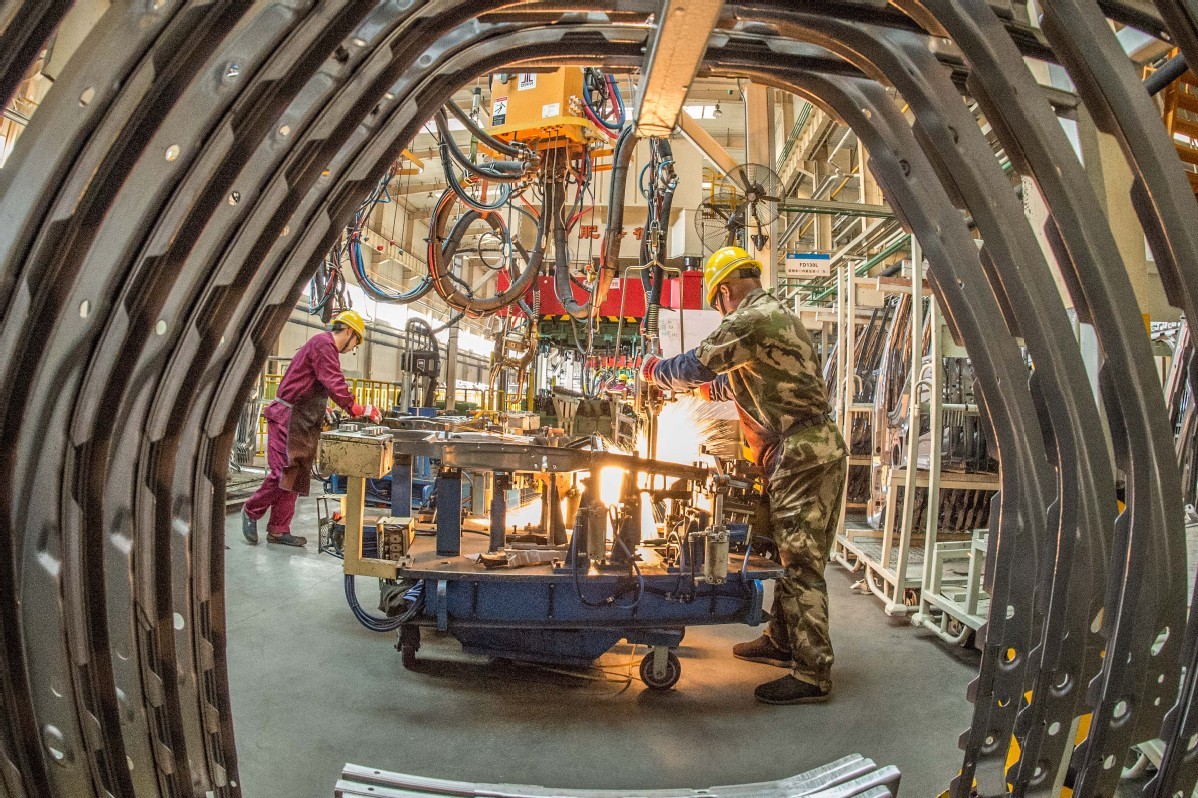 Employees work on a production line of an automaker in Qingzhou, Shandong province. (Photo: China Daily)

To fight against the novel coronavirus outbreak, Wuhan, the capital of Hubei province, and some other cities in the province have consecutively suspended all public transportation and closed all outbound transportation channels from Jan 23, in a bid to curb the spread of the virus.

Many provinces and cities have since launched a top-level significant public health emergency response. The country's Spring Festival holiday was extended to Feb 2 after the approval of the State Council, China's Cabinet, and some regions even further extend the time of returning to work according to local situations. Many people are concerned about whether the novel coronavirus outbreak will seriously undermine China's economic development.

In 2002-03 the severe acute respiratory syndrome (SARS) broke out in China, which offers some historical data for us to evaluate China's current economic situation. But China's economic demand structure, industrial structure and macroeconomic regulation system have drastically changed compared with 17 years ago, which means the impact of the novel coronavirus on China's economy will not be the same as SARS.

First, China's demand structure has changed from investment driven to consumption driven. At the time of SARS, investment played the biggest role in driving the economy. Because SARS' impact on investment was limited, in 2003 China's GDP growth rate rapidly rebounded after the decline in the second quarter.

Since 2019, infrastructure construction and manufacturing investment have slowed while consumption has become the major driving force for economic stability. Consumption's contribution to GDP growth has increased from 35.4 percent in 2003 to 57.8 percent in 2019. As the novel coronavirus outbreak has greatly curbed people's daily consumption including catering, shopping, entertainment and tourism during the Spring Festival holiday, it has had a greater impact on China's economy than SARS.

Second, China's industrial structure has changed from secondary industry-dominated to being tertiary industry-dominated. The service sector's proportion in China's economic structure has increased from 42.03 percent in 2003 to 53.9 percent in 2019. As the novel coronavirus outbreak has seriously impacted industries including transportation, tourism, wholesale and retail, as well as film and television, its impact on China's economy will be greater than SARS.

Third, the World Health Organization declared on Friday that the outbreak of the novel coronavirus constitutes a public health emergency of international concern, which will probably have a negative impact on China's exports of goods, although it will not reduce its trade surplus to a large scale. Although WHO opposed countries imposing a travel ban or trade ban on China, the international public health emergency will unavoidably impede personnel exchange and custom clearance for goods between China and overseas regions. One of the major trade deficits of China's trade in services is overseas tourism, which will stop until the epidemic is known to be over. However, in general, China's total trade balance will not be greatly impacted by this public health emergency.

Fourth, after 17 years China's macroeconomic regulation system, fiscal policy, monetary policy, industrial policy and employment policy are much improved, which will play a crucial role in preventing the outbreak having a serious long-term impact on the economy.

China's central bank pumped 1.2 trillion yuan (about $173.3 billion) into the financial system via reverse repos on Monday to keep liquidity in the banking system at a reasonably sufficient level during the epidemic control period.

But with consumption and the tertiary industry the most affected by the novel coronavirus outbreak, China's economic downturn pressure will further increase this year. Based on the statistics of 2003 and 2019, in the first quarter of 2020 China's GDP may decline by up to 800 billion yuan ($113.92 billion), and the actual GDP growth of the first quarter may be about 5 percent. As the first quarter is always the off season for production, if the novel coronavirus outbreak can be effectively curbed by the end of February, its impact on China's GDP will be 0.5 to 1 percentage point considering the economic recovery after the epidemic situation.

Under such circumstances, China could achieve the goal of the 13th Five Year Plan (2016-20) to double 2010's GDP by 2020. That means the novel coronavirus outbreak's negative impact on China's economy is controllable if the epidemic can be curbed within the following two months.

To reduce the negative impact of the severe novel coronavirus outbreak, top priority must be given to effectively curb epidemic. If the population migration to other regions, especially the regions with poor medical treatment conditions leads to a further spread of the novel coronavirus, there will be great impact on enterprises' production.

Moreover, the authorities should strengthen social policy to guarantee people's basic livelihoods. Many migrants need to return to urban areas to work for living, which face great economic pressure due to the epidemic. And the authorities should reduce enterprises' economic burden and cost during the lockdown, in order to help them overcome operational difficulties during the epidemic period. Most important, we should guarantee smooth economic circulation as much as possible. For instance, it is difficult to deliver fodder for livestock and manufacturing enterprises to get raw materials, which will interrupt enterprises' operation and reduce capital turnover efficiency. Hence we should improve economic circulation to guarantee agricultural and industrial production.

The author is a researcher at the School of Economics, Renmin University of China. The views don't necessarily represent those of China Daily.