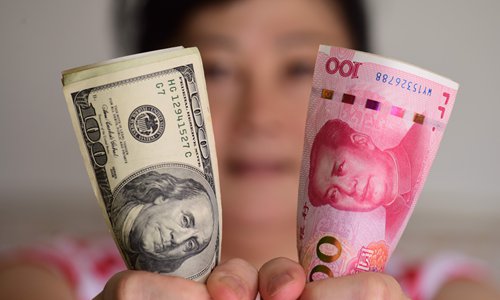 The impact of the China-US trade row and other external factors on the Chinese financial markets - the A-share market and the currency market - will be limited, experts said on Monday.The comments came after recent volatility in China's stock and currency markets, which saw the Shanghai Composite Index down to a two-and-a-half year low and the Chinese yuan weaken against the US dollar toward the psychologically important mark of $1 against 7 yuan. It also came as US President Donald Trump, who launched a trade row against China and rolled out a series of protectionist measures against US trading partners, tweeted over the weekend on the development of Chinese stock markets. Stock market impact"Tariffs are working far better than anyone ever anticipated. China market has dropped 27 percent in last 4 months...," the US president tweeted, noting that the US market is "stronger than ever."Chen Fengying, an expert at the China Institutes of Contemporary International Relations, said such a correlation is flawed. "President Donald Trump thought the US had won. In fact, the trade war has just begun. It is too early to tell how the trade row will evolve and affect the US and the Chinese economies, thus it is too early for the US president to reach such a conclusion," Chen told the Global Times."While the performance of the Chinese stock markets has indeed been affected by the heightened trade tensions between China and the US, it cannot be concluded that a Chinese stock market slump will cause China to lose the trade war with the US," Chen said.Yuan exchange rateThe Chinese yuan has been affected, in part by the trade row and its uncertain consequences, the Economic Observer reported on Monday. But the report cited Sheng Songcheng, an official at the People's Bank of China, the central bank, as saying the yuan will not depreciate further than $1 against 7 yuan, as this is a psychologically important benchmark.Guan Tao, a former senior official at the State Administration of Foreign Exchange, said that as of now, the yuan's depreciation has been the result of market factors instead of deliberate government interventions, and there is no sign that the Chinese government is working on a currency war."The current weakening of the yuan is a reflection of a change in market sentiment following the change in economic fundamentals," Guan told the Global Times on Monday. "A short-selling sentiment is behind the relatively fast weakening rate in yuan depreciation," Guan said.Guan said the economic performance data for July will be released, with data on exports, investment and foreign exchange, and these data will have a big influence on the expectations of players in the currency market."If the trade war's impact is limited to the Chinese economy, then its impact on the yuan exchange rate is also limited," Guan said."There are varying views on the trade row's impact, but personally, I believe a trade row impact will be limited to the Chinese economy. China is a major economic power, and for an economy with such a status the economic performance is determined more by internal factors than external factors," said Guan, who is currently a senior research fellow at China Finance 40 Forum. "Data will decide whose guess is correct. We cannot scare ourselves with some extreme stories as separate cases are by no means a reflection on the whole picture," Guan said.