OPINIONS Walking the development road together

Walking the development road together 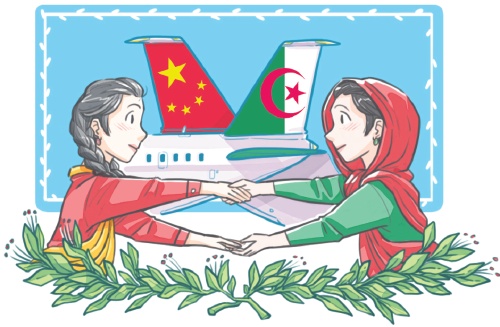 Algeria is the largest country and the fourth-largest economy in Africa, a major country in the Mediterranean Sea area and Arabia, as well as an important cooperation partner of China.

In 2014, Algeria became the first Arabian country to establish a comprehensive strategic partnership with China. Since then, relations between China and Algeria have entered a new stage of development. China and Algeria share a solid political foundation, and their practical cooperation has yielded fruitful results. They have also been conducting close cultural exchanges, and have kept deepening and enhancing their comprehensive strategic partnership. China has been Algeria's largest source of imports and major trade partner for years. The two countries have jointly completed many practical cooperation projects, including the projects of the century in Algeria－the East-West Highway and North-South Highway, the Great Mosque of Algiers－the largest mosque in Africa and third-largest in the world, the world-class Centre International de Conferences and the Opera House in Algiers, which have become new symbols of Chinese-Algerian friendship.

The two countries have maintained close cultural exchanges. Algeria has taken part in cultural events to celebrate the Chinese Lunar New Year for many years, which have played an active role in consolidating the friendship between people of the two countries. The Chinese and Algerian people have formed sincere ties, and the two countries have reaped mutual benefits since the establishment of diplomatic relations over 60 years ago. The China-Algeria relationship is an exemplary paradigm for international relations.

Since the outbreak of the novel coronavirus, cooperation to prevent the spread of the virus has become the main theme of China-Algeria practical cooperation. At the beginning of China's fight against the novel coronavirus, Algerian President Abdelmadjid Tebboune delivered a message of sympathy to President Xi Jinping. Algeria was also one of the first countries to provide emergency medical supplies to China. When Algeria began its own battle with the virus, China offered help in return, providing lots of medical aid, and sharing its experience of successfully fighting against the virus. It also sent a team of medical experts to Algeria, and provided Algeria with COVID-19 vaccines. Apart from that, China actively supported Chinese enterprises to answer the call of the Algerian government to resume production, and they have made important contributions to Algeria's economy during the pandemic, and helped Algeria to overcome the difficulties it has faced. China and Algeria have steadfastly helped each other in hard times, jointly overcome difficulties, demonstrated the special friendship of the two countries by their acts, and set a model for international cooperation in the fight against the pandemic.

Now the world is undergoing profound changes unseen in a century. Both China and Algeria need to consolidate and develop their traditional friendship more than ever to jointly face the risks and challenges that have emerged. Both China and Algeria are developing countries, and both face the important task of development. Anticipating the post-pandemic era, China and Algeria share a solid political foundation, strong economic complementarity, and broad potential for cooperation. China will, as always, continue to support Algeria in pursuing a development path that suits its national conditions, and firmly oppose any external interference in its domestic affairs. China would like to keep working with Algeria to continuously deepen the comprehensive strategic partnership, jointly safeguard the legitimate rights and interests of developing countries, defend international laws and basic rules of international relations, and promote building a community with a shared future for mankind.

China and Algeria will continue to fight against the pandemic, and reach a higher level beyond the anti-pandemic cooperation displayed over the past year. China will provide convenience to Algeria when the latter purchases Chinese vaccines, and firmly oppose any nationalism in the distribution of COVID-19 vaccines. China wants to help Algeria to achieve the success in its fight against the pandemic, and work with it to build a global community of health for all.

In the post-pandemic era, China and Algeria will continue to deepen their practical cooperation in various fields. As the Chinese saying goes, only when it is winter does one realize that pine and cypress wither late. The pandemic has highlighted the strength of the friendship between the two countries and the advantages of their practical cooperation. President Tebboune proposed "Building a New Algeria "last year. Now the country is devoting its efforts to realizing that vision and economic prosperity. As a good friend, good partner and good brother of Algeria, China would like to share its own development experience, support Chinese enterprises to continue participating in the economic and social construction in Algeria, and further synergize the Belt and Road Initiative with the vision of a "New Algeria". China will dig deeper to tap the huge potential of bilateral cooperation in various fields, enrich the content of the Chinese-Algerian comprehensive strategic partnership, and build a China-Algeria community with a shared future.

As an old Chinese saying goes, one is not alone on the road when the world is one family. Under the joint efforts of the two countries under the framework of the Belt and Road Initiative and the vision of a "New Algeria", the China-Algeria cooperation will continuously release more of its great potential, and usher in a brighter future for the Chinese-Algerian comprehensive strategic partnership.

The author is the Chinese ambassador to Algeria.