War-ending declaration good, but not necessary 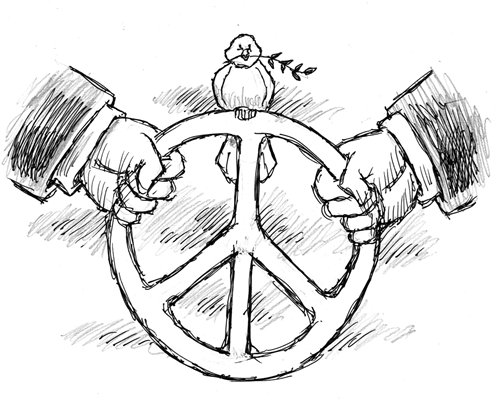 During my mid-June visit to South Korea's Ministry of Foreign Affairs, I came across, in the lobby of the ministry's office building, and among many other publicly displayed exhibits, a copy of the Armistice Agreement that has put the Korean War to a temporary halt for over 65 years.

This is a quick reminder that the two Koreas are technically still at war, as the armistice agreement only ended the 1950-53 military conflict in a practical sense.

The signatures on the last page of the document clearly show who signed the agreement. An easy conclusion would be that Seoul's foreign affairs authorities are aware of the fact that South Korea was not a signatory to the armistice agreement.

With momentous events projecting the Korean Peninsula into the spotlight since the beginning of 2018, it is simply natural and logical that the armistice agreement has been dug out. Something must be done to end the Korean War technically, so a peace accord is pretty much needed to replace the armistice.

Then, who should be the signatories to the peace accord? In the first place, the question should never have been asked - it is beyond questioning. However, it has become a lingering hot-button issue that deserves to be answered, or even clarified.

Following this presidential announcement, quite a few South Korean media outlets and even some government officials began to claim that China should not participate in the process to discuss the end to the Korean War, partly citing the fact that China has established and maintained sound relations with other countries related with the Korean War, namely the two Koreas and the US. And some Chinese scholars even worried that China might be "marginalized" vis-à-vis the Korean Peninsula issues, or be "kicked out of the game," to use harsh words.

Well, there is nothing to worry about. There is a noticeably outstanding distinction between a declaration to end the war on the Korean Peninsula and a peace accord that will finally take the place of the Korean War armistice agreement. A war-ending declaration will never be the same as a peace accord in this case.

In the wake of the two Kim-Moon summits and the high-profile summit between US President Donald Trump and Kim Jong-un on June 12, tensions on the peninsula have significantly eased. The US and North Korea are not as hostile toward each other as they used to be. They have committed to making a new beginning in relations. The two Koreas have made remarkable improvement in ties, having vowed to alleviate military tensions and eliminate the danger of war by various means.

Under such circumstances, a declaration to end war on the Korean Peninsula sounds great, might be useful but is actually unnecessary. Of course, there is good reason that such a declaration has been hyped up by the South Korean media as it will become a political legacy that both Moon and Trump need badly at home.

China will be glad to see this goal accomplished, as it complies with the time and tide as well as the shared wishes of the international community.

As for the peace accord, China has made its official stance crystal clear. In early August, Foreign Minister Wang Yi told a media briefing in Singapore that "turning the armistice agreement into a peace accord is another matter. The parties concerned should sit down to restart negotiations and to go through legal procedures."

To save time and trouble, it is advisable to launch the armistice-to-peace-agreement process directly and immediately. Then, who is eligible to sit down at the negotiation table? The answer is self-evident: the signatories to the 1953 armistice agreement, namely North Korea and China on one side and the US on the other. As an important party to the Korean Peninsula issue and a signatory to the Korean War armistice agreement, China will play its role in this regard, as always.

Then what about South Korea? It is absurd for someone who refused to sign an agreement to sign another one to replace the first one.

However, as South Korea is an indispensable player on the Korean Peninsula, a "3+1" model could be taken into serious consideration. While Beijing, Pyongyang and Washington are engaged in the negotiations, Seoul could act as an observer to the process.

As soon as the peace accord is signed, South Korea, as an ally of the US, a strategic cooperative partner of China and the southern sibling of North Korea, can play its unique role in establishing a permanent and solid peace regime on the peninsula.