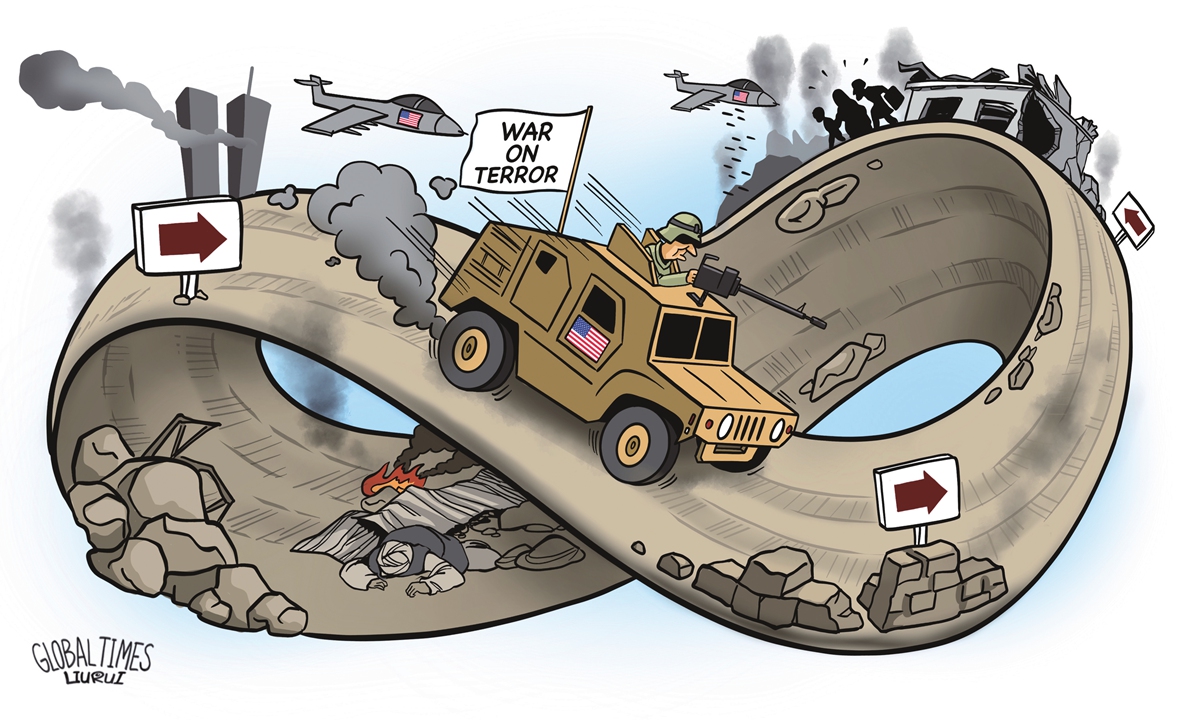 It seems that the US government's militaristic tendency is growing parallel with anti-war sentiments within American society. How does this influence US antiwar activists? Can protests exert effective pressure on US politicians who made decisions to go to war? What should the global community do to end Washington's warmongering behaviors? Jeb Sprague (Sprague), an antiwar activist and sociologist researcher at the University of California Los Angeles, discussed these issues with Global Times (GT) reporter Xia Wenxin. On September 21, Sprague interrupted former president George W. Bush's speech in Long Beach, California and demanded him to be held accountable for Iraq War.

GT: On October 18, former US secretary of state Colin Powell passed away. Powell played an important role in the US-launched Iraq War. As an anti-war activist, what do you think of him?

Sprague: Colin Powell was really the most symbolic figure for the launch of the war in Iraq. Everyone remembers the photo of him holding up the vial at the United Nations. They didn't have memes back then, but it was like today's meme for the war on Iraq and the whole scam around WMDs that they use to sell the war. There were no WMDs in Iraq, just like there was no the Gulf of Tonkin incident that the US trumped up to start the Vietnam War. In the history of the US empire's intervention around the world, there are always these events they use to sell these interventions to the American public. And that's what Powell is most remembered for because the war in Iraq costs the lives of a million Iraqis and around 10,000 Americans.

Another part of Colin Powell's legacy that really has been forgotten in all of the media coverage of him is his role during the Cold War in Central America. There's this long history of the US military with all these counterinsurgency and regime change operations, and Colin Powell was really at the center of that.

GT: On September 21, you interrupted former US president George W. Bush's speech by condemning him for his war crimes and asking to arrest him. The video of this, along with other similar videos, has gone viral on social media. Do you think it would generate pressure on Bush?

Sprague: I think inside the US, Bush and other figures like him have complete impunity, and that's the problem. One of the central problems in our country is that you can murder so many people. If you murder 5 or 10 or 20 people, you would be put in court, jail, maybe death row as a serial murderer. But you can murder hundreds of thousands of people, millions of people, through these militaristic policies and get away with it.

The US has a long history, at the same time, of social movements and antiwar movements of veterans and their families. There's a lot of younger people now that are learning about this history of US militarism and empire around the world. People already know about the struggle against racism, police brutality, but now I think a lot of people are waking up to the imperial policies of the US.

Right after the September 11 attacks, when the country was devastated by that attack and thousands of innocent people died, Bush had a real opportunity to build a coalition and work with countries around the world to bring Osama bin Laden to justice, and to build peaceful dialogue with countries traditionally the US was at odds that had sympathy for what happened in New York on September 11, 2001. But instead of that, Bush and his administration used that sympathy to invade and occupy Afghanistan and Iraq, write new constitutions, do a new government, sell off countries' resources, and hold up an occupation regime in those countries. So we feel that he needs to be held accountable.

GT: It is known that the US military-industrial complex has hijacked the country's foreign policy. The Pentagon hypes up imaginary national security threats in order to sustain its massive budget. It now targets China. Do you feel the imminent danger of the US' hawkish stance toward China?

Sprague: Yeah, definitely. Some years ago, I watched John Pilger's film The Coming War on China. He looks at the US strategic pivot toward East Asia with the bases circling China that go back from the end of World War II and the solidification of "Pax Americana" around the world. And the push to stop a multipolar world from forming with other countries able to engage in sovereign policies.

But it's such a contradictory process because as you have the US military-industrial complex aimed at the few powers with military industry in other parts of the world that it's in competition with, at the same time, there's a lot of cross-investment and trade and economic interaction. I live near the Port of Long Beach and the Port of Los Angeles where there's a huge amount of trade with China and a lot of other countries around the world. So you see that interconnectivity. On one hand, you have these economic ties that so many people benefit from with all the jobs this creates and investment. But at the same time, it's part of a global capitalist economy. It has built up so much inequality and problems like climate change. And then you have the US empire trying to maintain an umbrella over this giant process that is playing out. So it's a very contradictory and complex situation that we find ourselves in 2021.

And I think one of the most important things that people can do is to try to promote the conditions for peace and communication and peaceful relations and development based upon human needs and survival, rather than just profit, resource extraction, and short termism. So the antiwar movement in the US then is in many ways, one in the same and interlinked with other social movements in the country.

GT: The US has faced huge failures in its wars in Iraq and Afghanistan, especially the latter one. How have these setbacks changed the morale of US soldiers? Can the US government and politicians still convince their soldiers to complete their missions firmly?

Sprague: There's a lot going on there because, on one hand, the war in Afghanistan wasn't really about success. I think, for years now, they've known that they weren't going to achieve these goals that they had initially set out for them, or at least the goals that they had publicly stated. I think it became more about all the different economics behind the occupation: contracts, subcontracts, all these big companies, and the supply chains going in there and all the money being made off of Bagram Air Base. There was around $30 billion just in recent years of construction projects, and a lot of big American-based multinational companies were involved.

But it was such a contradictory process because at the same time, there is Chinese and Pakistani investment in Afghanistan. So it was becoming more and more integrated with the global economy. But yet the US had this military presence that eventually was not going to continue on ad infinitum. It was eventually going to fall apart. And I think in a lot of ways the goal was more about the money to be made off of that.

A year or two ago, I was reading a study about the Pentagon being worried because there's such a high level of war-weariness amongst the American public after the Iraq War and the war in Afghanistan. People learn about the truth about all these regime change operations. You see these headlines of trillions of dollars going into these missions. And you look down the street during the peak year of COVID-19, there were about a thousand small businesses closing every day. So it doesn't take much to see that dichotomy where the money is going.

But there's a real effort through Washington, Hollywood movies, and the mass media - the monopoly, corporate media, to really amp up a new cold war with China. If you look at polls where they ask Americans if they would be willing to have American soldiers go to the island of Taiwan to fight in a war with the Chinese mainland and defend Taiwan, the poll numbers over the last 30 years have really gone up. So there's a real effort to sabotage positive relations with China. I think more and more you can say anything you want about China in the media here, as long as it's negative. If you want to say China is committing "genocide" or all these crazy conspiracies about China promoting COVID-19, all these very fringe ideas get a lot of coverage in the media here.

GT: Now let's talk about your antiwar cause. You are an antiwar activist, so how do you usually mount your antiwar efforts? What is the usual form? Are you satisfied with the effect of these activities?

Sprague: I was involved with a lot of groups 15 or 20 years ago when we would hold daily or weekly rallies against the war when they were going into Iraq. I have a cousin who was in the Iraq war, who has post-traumatic stress syndrome, a lot of problems with drugs and jails, difficulties in recuperating, and in being able to function in a healthy way in society after having that experience in the Iraq War.

My father was in the Vietnam War and was a conscientious objector. That's someone who's in the military and when they see things, they decide they don't want to take part. He was actually tortured by the military, put into a straitjacket, and force-fed. And there's a good documentary called Sir! No Sir! that looks at the Vietnam War conscientious objectors. There were about 60,000 men and women that refused to fight when they were in the military during the Vietnam war. So historically, there's been many strategies of the anti-war movement, including building resistance to war within the military itself and opposing all these ridiculous foreign excursions.

There were massive protests before the launch of the Iraq war. In recent years, we've had large protests in DC against economic wars, where the US uses sanctions to asphyxiate third world economies. Actions like myself and Michael Prysner got media attention because we confronted Bush directly. There are other campaigns too. For example, on social media, there's been people that have done a good job in protesting Raytheon, which is a company that builds a lot of high-tech Air Force weaponry. So there's been a lot of different areas that protesters have been involved in.

The difficulty always, though, is getting the message out to a broader part of the public. Because big media outlets don't want to criticize the war effort. Meanwhile, big tech is working with DC think tanks, like the Atlantic Council, to deplatform and marginalize anti-war voices. And also, lots of times, activism can hurt young people in their life, especially in the job market. When people apply for jobs in the university or different industries and careers, or especially in government, if you were involved in anti-imperialist movements, you can be found through an internet search or have right wingers write complaints to your boss. So things like that can harm your future life. That's one of the difficulties that a lot of activists face in the US.