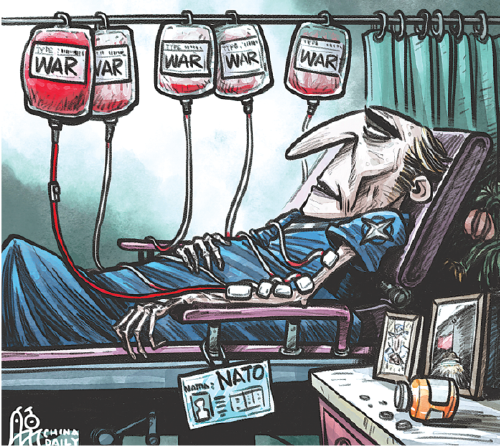 The ongoing Russia-Ukraine conflict has entered its second month. Since its very beginning, the international community, including China, has striven to promote negotiations so as to find a peaceful solution to the crisis.

However, some Western media have been groundlessly accusing China of taking "a back seat" in diplomacy and hoping to "benefit from geopolitical shifts," ignoring the fact that it is Washington that has been fanning the flame and fishing in the troubled waters of the Ukraine issue.

The current conflict was actually foreshadowed by the US actions of driving five waves of NATO's eastward expansion and supporting color revolutions in Ukraine over the years. From the Orange Revolution in 2004 to the political chaos in 2014, the United States had been fueling disorder in Ukraine and squeezing Russia's strategic space, until the military conflict between the two finally broke out.

Instead of dealing with the Russia-proposed drafts on security guarantees in December 2021, Washington cold-shouldered Moscow's request for dialogue, led NATO to increase forces deployed on its eastern flank, and aggravated regional tensions.

The tragedy "could have easily been avoided if the Biden Admin and NATO had simply acknowledged Russia's legitimate security concerns regarding Ukraine becoming a member of NATO," former US Congresswoman Tulsi Gabbard tweeted.

As the conflict continues, Washington, which keeps claiming that it appeals for peace, has actually never stopped fanning the flames by pushing other Western countries to join it in providing Ukraine with money and weapons and pounding Russia with all-round and indiscriminate sanctions.

While refusing to get involved in the conflict directly, Washington has been escalating the tension with a clear goal of reaping economic and political benefits from it.

Some European countries have hiked their national defense budget since the conflict, pushing up the stock prices of US military companies, while US bankers and oil tycoons have also benefitted enormously from sanctions against Russia imposed by Washington and its allies.

The Ukraine crisis "has the champagne corks quietly popping in the Pentagon, on K Street, in the defense industry, and throughout the halls of Congress," wrote Franklin C. Spinney, a former military analyst for the Pentagon, in a recent commentary.

Over the past decades, Washington has been maintaining its global hegemony and dominant position in Europe by creating chaos worldwide. This time, the same old trick has worked again. Washington has once again controlled autonomy-seeking Europe and isolated its rival Russia, without impacting itself.

In sharp contrast, China has acted impartially on the Ukraine issue. Upholding an independent foreign policy of peace, China has been promoting peace, opposing war, and firmly safeguarding international fairness and justice.

China has been pained to see the ongoing military conflict between its two friends, and has been actively boosting peace talks since the conflict broke out.

Those playing with fire will get burnt. Washington's schemes of provoking military conflicts and taking advantage of the chaos it created to reap profits will certainly be tried by history.