Washington makes WHO a new scapegoat 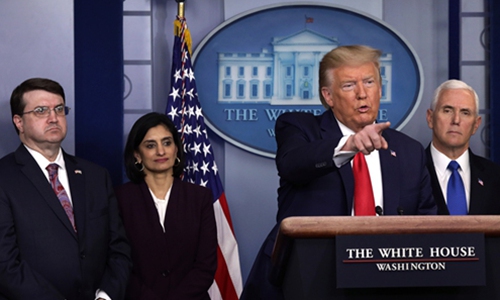 US President Donald Trump on Tuesday blasted the World Health Organization (WHO) for having "been wrong about a lot of things" and accused the organization, largely funded by the US, of being "China centric." He boasted that fortunately, he rejected the global health body's advice on keeping the US borders open to China early on. He threatened to put "a very powerful hold" on his government's funding of the WHO, then backtracked, saying "I'm not saying I'm going to do it but we're going to look at."

Washington has found a new scapegoat to shift the blame for the US mishandling of the COVID-19 pandemic - that's many people's first reaction to Trump's remarks.

Obviously, the WHO's work is not perfect. But it's the governments of sovereign countries that bear the main responsibility to fight the pandemic and the WHO only plays a role of promoter and coordinator. This is obvious to all. Facing the same virus and same recommendations from the WHO, some countries have done a good job while the US response to the pandemic is among the worst in the world. Those who are obliged to lead the Americans in the virus fight are to blame.

The WHO issued warnings to countries and regions across the world in mid-January and declared the novel coronavirus outbreak a public health emergency of international concern on January 30. Based on this, the US government made the decision to restrict entry from China, though the WHO advised against the application of travel restrictions.

The US government thought the country would be safe by banning travelers from China. It completely ignored the warnings of experts, did nothing to supervise and prevent the spread of the virus in communities, and didn't prepare for the epidemic fight. These are its biggest blunders. The US government had turned a blind eye to the risks and a deaf ear to warnings from all over the world until the country had to pay the price.

Other Western countries also pointed an accusing finger at the WHO's praise for China's measures, such as the Wuhan lockdown. Much of the criticism contains ideological sentiments. Looking back, hasn't China done the best by locking down Wuhan and resolutely implementing quarantine measures?

China's other regions, which are close to Wuhan, have rapidly curbed the spread of the epidemic while the US and European countries that are far away have been hit hard one by one. Doesn't China's fight against the COVID-19 outbreak deserve support from the WHO?

The US government and pro-government members in Congress have an inescapable responsibility for underestimating the coronavirus. They have botched the US epidemic fight, so they urgently need to find a scapegoat to avoid being remembered as a stain in history. They first passed the buck to China, now the WHO.

US media has revealed that the White House was warned in January of the risk of an epidemic. Trade adviser Peter Navarro estimated that the coronavirus crisis could cost the US trillions of dollars in late January. But all this has been snubbed by the White House.

Refusal to reflect is posing a threat to the US' future epidemic fight. If this continues, the US may face a graver situation and the epidemic will become a long-lasting challenge that would inflict enduring pain on its economy, which will implicate the world because of the US' special international status.

Washington should stop its hypocritical political games. They are of no help for the US to combat the coronavirus. Only by effectively reducing the losses of the American people can US politicians finally recover their political losses.