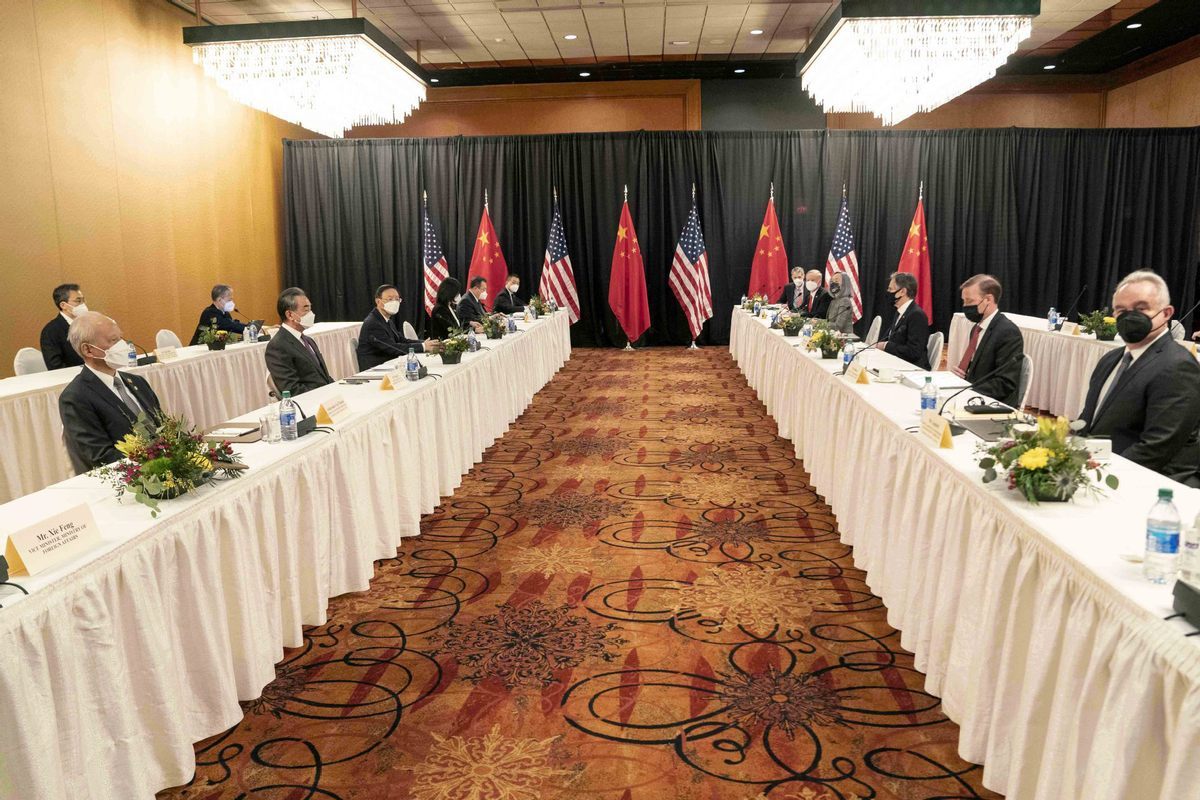 Yang Jiechi, a member of the Political Bureau of the Communist Party of China (CPC) Central Committee and director of the Office of the Foreign Affairs Commission of the CPC Central Committee, Chinese State Councilor and Foreign Minister Wang Yi, US Secretary of State Antony Blinken and US National Security Advisor Jake Sullivan attend a high-level strategic dialogue in the Alaskan city of Anchorage, the United States, March 18, 2021. (Photo: Xinhua)

Trust US officials to turn what was supposed to be a diplomatic meeting with their Chinese counterparts into an event to spew vitriol at China, taking potshots at its domestic and foreign policies and dictating what it should and should not do. With their grandstanding, US politicians, trampling diplomatic protocol and violating every international relations norm, used the meeting that began on Thursday not to iron out differences and put Sino-US relations back on the right track, but to brazenly interfere in China's internal affairs.

Alas, the Joe Biden administration's stated no-conflict-but-competition-and-cooperation China policy is mere rhetoric, for when the first occasion arose for it to walk that talk, it turned out it also has a condescending and arrogant attitude.

Days before the meeting in Anchorage, Alaska, in an obvious attempt to gather support of its allies, US Secretary of State Antony Blinken and Secretary of Defense Lloyd Austin visited Japan and the Republic of Korea. But by declaring, "I'm hearing deep satisfaction that the United States is back, that we're reengaged" and "I'm also hearing deep concern about some of the actions your government is taking", Blinken betrayed the US' lack of confidence that its policies were being accepted by its allies in the Indo-Pacific region.

The Biden administration knows full well the onus to improve bilateral ties lies squarely on it, because the Donald Trump administration's China policy, which the incumbent dispensation seems to be continuing, has not only pushed Sino-US relations to a historical low but also somewhat isolated the US from the international community.

While the Trump administration tried to use tariffs and sanctions as economic tools to coerce China and the rest of the world to bow to its "America First" policy, and failed, the Biden administration seems intent on adding value diplomacy to that tool to divide the world into factions, Cold War-style.

Asserting the US is united with its allies in pushing back against China's moves at home and abroad, Blinken claimed those moves "threaten the rules-based order that maintains global stability", without realizing that given the US' track record in human rights and democracy at home and abroad, he appears like a thief shouting "catch thief".

As China's top diplomat Yang Jiechi, a member of the Communist Party of China's top decision-making body, said, Washington needs to stop pushing its own version of democracy, especially at a time of rising domestic discontent in the US, not to mention its failure to deal with its own human rights problems.

The world has changed dramatically from what it was when the US' old playbook to success was written and practiced. Just as Yang said, in these changed circumstances, "it is important for the United States to change its own image and to stop advancing its own democracy in the rest of the world."

"China will not accept unwarranted accusations from the US side. There is no way to strangle China."