US President Donald Trump formally signed proclamations to impose steep tariffs on imported steel and aluminum on March 8. The US will slap a 25-percent tariff on imported steel and 10-percent on aluminum in 15 days with initial exemptions for Canada and Mexico, adding that waivers could be made for other countries through negotiations. The proposed tariffs have triggered strong reaction in the US and other countries are paying close attention to their unintended consequences. In fact, imposing high aluminum and steel tariffs indicates that Trump has misinterpreted both the US economy and others' normal approach to pursue economic growth. 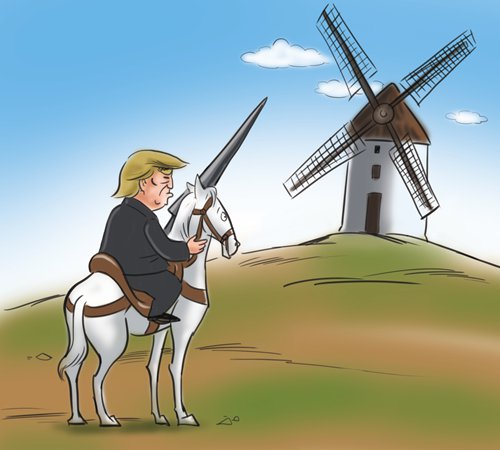 The US enjoys sound growth. Its economy tops the world and hi-tech industry leads the globe. The country has witnessed steady economic growth and remarkable improvement in employment, personal income and people's livelihood over the years. Its prosperity derives mainly from the current world economic order and therefore, it is the top beneficiary of the current global free trade system.

However, instead of promoting mutual benefit and extensive exchange with other major economies, Trump has resorted to high tariffs that may disrupt global trade order. This shows US government misunderstands globalization and ignores Americans' demand for better employment and higher personal income. Such short-sighted economic nationalism will cause chaos in the US and hurt global economic order. This may also lead to the stagnation of US economy.

Trump's tariffs are a manifestation of political opportunism. He blamed the US' enormous trade deficit and high unemployment on other countries during the 2016 presidential election, rather than addressing the actual causes. Politicizing economic issues is a characteristic of the Trump administration. His extreme step to resolve economic problems will likely exacerbate the existing political divide and political polarization within the country and even worsen political conflicts between the US and other major economies.

Imposing steep tariffs will impede US economic growth and thwart political reconciliation, and even hurt Washington's global influence and trigger turbulence in the international order. Actually, by imposing tariffs, Trump is trying to woo his supporters so that he can reap gains in the 2020 presidential election. However, such behavior will damage the interests of more groups and isolate the US in dealing with global affairs, which will reduce the possibility of Trump and his party winning the midterm elections and the 2020 presidential race.

Trump's claim that Beijing is to blame for US trade deficit will not only do no good to the latter's skewed foreign trade, but also cast a shadow on its efforts to boost the economy, leading to strained ties between China and the US. The moderate voices backing globalization in the Trump administration either resigned or have been gradually marginalized in the government. Now Trump is surrounded by figures with twisted ideology or the mind-set favoring geopolitical contest.

China-US business ties are being viewed through an outdated Cold War prism, which includes strategic competition in the political, economic and geopolitical spheres. Mutual benefit, the essence of Sino-US business relations, has been undermined as the Trump government gradually sees trade deficit with China as a drawback.

China-US trade imbalance is related to the US' controls on high-tech exports to China and imported goods from China for security reasons. The US has stepped up restrictions on certain areas that exhibit enormous potential for bilateral cooperation but blames its trade deficit on China. This is the US way of assessing trade relations with other nations. Such an outmoded way will only result in rising trade rivalry between the US and other major economies including China.

The US will suffer due to its unscrupulous attempt to pursue economic interests at the expense of other countries, a lose-lose situation for Washington and other major economies.

The author is a professor with the Institute of International Relations at China Foreign Affairs University.