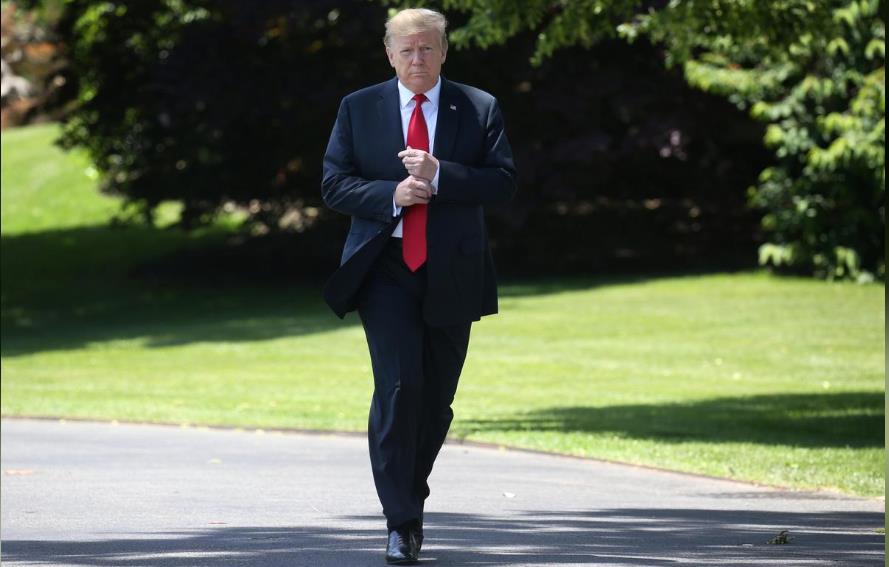 US President Donald Trump leaves the Oval Office to speak to the news media before boarding Marine One to depart for travel to Japan from the South Lawn of the White House in Washington, May 24, 2019. (Photo: Agencies)

Editor's note: With their "America first" obsession, some people in the United States do not care about people in other countries. Zhong Sheng, a columnist for People's Daily, comments:

Those in the United States who have taken the lead in advocating a trade war with China never mention the huge benefits the US has gained from its trade with China. They often talk about other countries "endangering the US national security", but make no mention of the presence of the US' intelligence network across the world. They lash out at the World Trade Organization and other international organizations, but ignore the fact that it is the US that created and leads them and it is the biggest beneficiary of the established global system.

"Other countries are afraid to take retaliatory measures against the US because the US has far more power than them," White House trade adviser Peter Navarro said bluntly. Under such a hegemonic logic, the US believes its rules are the laws of the world and other countries must obey them. Under the "America first" banner, some US politicians have even launched verbal attacks on US allies, which not long ago prompted German Chancellor Angela Merkel to admit that "the certainty of the postwar order" was beginning to collapse.

No wonder the US government always prides itself on being the "custodian" of the international order and the "judge" of international relations.

In today's world where the trends of multipolarization, economic globalization, cultural diversity and digitalization remain unstoppable, it is difficult to understand why some still hold such zero-sum views. Such a mindset goes against the tide of global efforts to build a community with a shared future for humankind.

Mutual respect, mutual benefit and win-win cooperation are the proper way for all countries to live together. Any country obsessed with playing a zero-sum game instead of pursuing win-win cooperation will only end up making enemies on all fronts and hitting a wall everywhere.