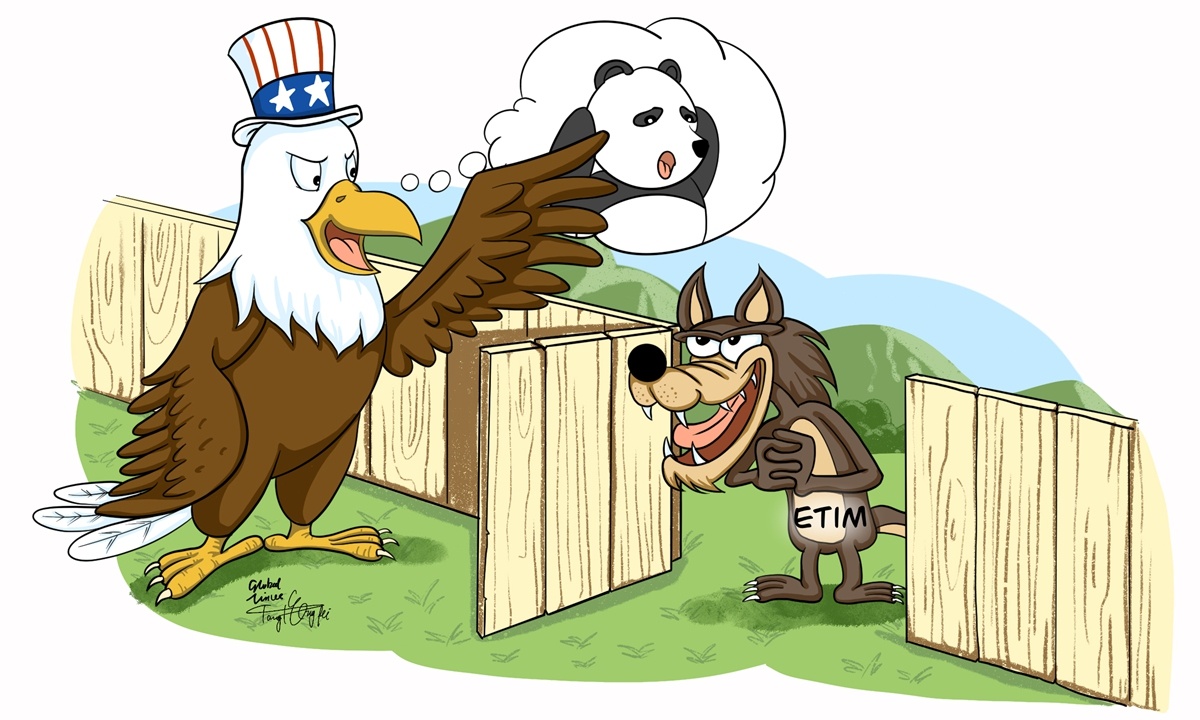 A CNN report on Saturday focused on 22 Uygurs who were once locked up in Guantanamo. They were classed as "enemy combatants" in Washington's war on terror, and to be more specific, members of the terrorist organization East Turkestan Islamic Movement (ETIM), or the Eastern Turkistan Islamic Party. Eventually, the detainees were all declared "non-combatants" and released.

Those Uygurs held at Guantanamo got caught not because they were engaged in terrorist activities inside China, but because they all belonged to ETIM that has a close connection with the US' biggest enemy at that time - Al Qaeda. Now, the US believes that those ETIM members are harmless to its interests. But all of them have a great hatred for China, so it uses them to harm the interests of China. This means that Washington simply lacks minimum moral standards.

At the same time, the US can use those Uygur terrorists to smear and even demonize China. For example, it can say that it is China's persecution of the Uygurs has forced these people to the point of no return. In any case, Washington can always find excuses to accuse and blame China.

As for the ETIM, Washington has removed it from its terrorist list last November, because "For more than a decade, there has been no credible evidence that the ETIM continues to exist." As far as I know, the size of the group has decreased in recent years, and now it operates mainly on the Afghan side of the Pakistan-Afghanistan border. Besides, there has not been large-scale activity from it in recent years - because it has always been the object of China's fight against terrorism. But it does not mean the terrorist group does not exist anymore.

About a decade ago, the US fought terrorism and captured ETIM terrorists in the name of maintaining world peace. Now it claims that this same terrorist organization no longer exists. It disbelieves Xinjiang's need for counterterrorism and even argues that the term "ETIM terrorists" is a label given by the Chinese government to all Uygur dissidents. This shows that American interests always come first in the eyes of the US. Washington will do whatever benefits itself.

At one point, counterterrorism cooperation between China and the US went smoothly during the administration of president George W. Bush, especially in the early years of the 21st century. Back then, both countries needed to cooperate on counterterrorism efforts.

As a result, during his visit to China in February 2002, Bush and former Chinese president Jiang Zemin discussed the establishment of a long-term counterterrorism mechanism between the two countries. Later that year, the Bush administration designated the ETIM as a terrorist organization.

In 2004, Washington added the ETIM to its terrorist exclusion list to prevent the movement of terrorists or terrorist groups by effective border controls. In 2009, the US Department of the Treasury still designated Abdul Haq, the general leader and commander of the Eastern Turkistan Islamic Party, as part of Al Qaeda's support network. This shows that from 2001 to around 2018, Washington's stance on counterterrorism was clear. It still had some positive sides.

But everything has changed since the Donald Trump administration. As Washington treats China as a strategic adversary, everything that involves China is now stigmatized. It is tarnished as bad, and questioned by Washington all the time. There is no principle to speak out regarding the US - because it does anything as long as it is anti-China.

Al Qaeda has not done much since 9/11 attacks. Since both its leader Osama bin Laden and IS leader Abu Bakr al-Baghdadi died, in this vacuum, there is a lack of leadership in terrorist groups around the world. In general, there is a retreat of centralized terrorism.

As the threat from terrorist groups has been greatly reduced for the US, now the country does not consider counterterrorism to be its top priority. Both the US counterterrorism strategy and cooperation with China have become less important. Instead, Washington's policy focuses now how to use released terrorists to interfere with China and undermine it.

The author is a senior researcher of Chongyang Institute for Financial Studies, Renmin University of China. opinion@globaltimes.com.cn