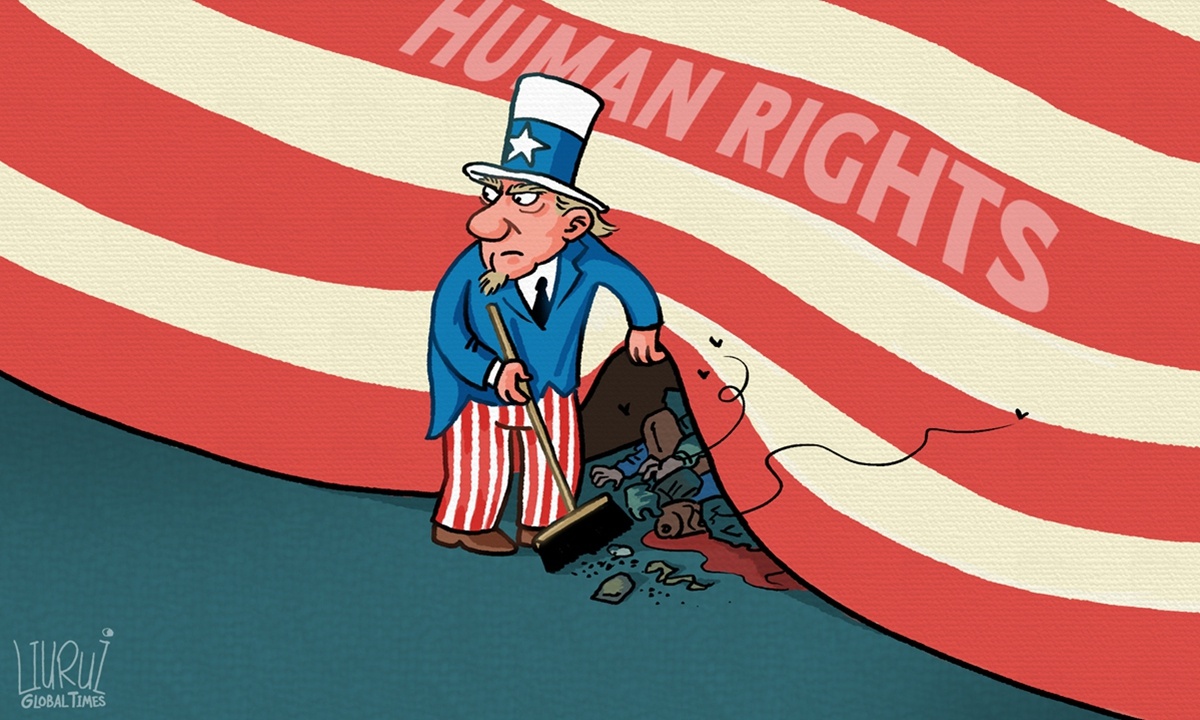 Look, Uncle Sam is busy cleaning up its own mess on human rights problems. Does the US still think it's the beacon of human rights? (Illustration: GT)

US Secretary of State Antony Blinken said on Tuesday that he has formally invited the United Nations' envoys on racism and minority issues to visit the US. Blinken said "great nations such as ours do not hide from our shortcomings; they acknowledge them openly and strive to improve with transparency." According to the Associate Press, "The message appeared aimed not only at an American audience but also at countries like Russia, China and others that routinely reject accusations of discrimination against minorities."

Despite the ongoing racial problems within the US, Blinken boasted that the Biden administration "is deeply dedicated to addressing racial injustice and inequities at home and abroad." Why is he so boastful? Because in the past century of practice on the world stage, Washington has developed a set of strategic and organized systematic methods to crack down on others while elevating itself.

According to a document of US Department of Defense, the main points of US national strategic communication (which is US propaganda) aim to improve the credibility and legitimacy of the US. These will eventually result in favorable attitudes and behaviors toward the US. They also aim to weaken an adversary's credibility and legitimacy, further discrediting its ideology and policies.

For example, it has used human rights, democracy, and freedom as weapons to attack others and simultaneously shift its own problems.

Washington indeed acknowledges that it has some problems, but it will never attribute them to being systemic. Instead, it insists that the problems are societal. Although the US has lifted or relaxed solid discriminatory measures such as racial segregation due to social pressures, it has never fixed fundamental contradictions. Meanwhile, it has always had a way to ignore them, such as making gestures and appearing to face up to problems - when in fact it never will.

Take the George Floyd murder case for example. It sparked large protest waves because of the gruesome scene of the crime was filmed and uploaded onto the internet. If Floyd was shot to death by police, the case would probably have been published in the newspaper in a small corner without stimulating so much fury.

In terms of maintaining US system's credibility and legitimacy, US government, media outlets and educational institutions have inherently formed an alliance. They have the ability to rationalize all kinds of problems in order to cover all their systemic flaws. Therefore, shocking incidents have broken out occasionally in the US - such as 1992 Los Angeles riots and 2014-15 Ferguson unrest.

Even currently, ethnic minority groups are undergoing what is worse than the Floyd case: thousands of hundreds of "illegal migrants" are in detention centers at the US border, while dozens of hundreds of children are living in the darkness of sexual abuse. But these are not under the US media spotlight. Hence, even if UN envoys were in the US, they wouldn't spend too much ink on such issues. As a matter of facts, they are in collusion with Washington; so they may pick up some trivial things and then whitewash doings of the US government.

Washington is very good at glossing over itself that even though over 608,000 Americans have died due to COVID-19, the US media still managed to create customized metrics to list their country at the top of the world's COVID Resilience Ranking.

There have been too many human rights abuses. It is an obligation of the US to put itself under scrutiny. However, Washington uses its invitation of the UN Special Rapporteurs as a move to show its moral superiority. It appears to be acting proactively to address human rights concerns, but in the end it will still use its rhetoric to remove the government from being responsible for the problems. At the very best, there might be some optimal scenarios like Nancy Pelosi kneeling for eight minutes in memory of Floyd. That's all.

Blinken wrote on Twitter, "Responsible nations must not shrink from scrutiny of their human rights record." This is obviously aimed at China. However, in fact, China welcomes anyone to visit here (including our Xinjiang Uygur Autonomous Region) to know what the real life is like there. China has sent invitations to the UN Human Rights High Commissioner. Meanwhile, China opposes so-called investigations based on the presumption of guilt.

If any group, under the name of either the UN, the US or the EU, comes to Xinjiang with its preset conclusions to investigate and intention to visit criminals who are in prison for violating China's laws, then their motivations will be greeted with skepticism—it will be evident they harbor ulterior motives.

This is the pattern of US political warfare, which has two purposes. The first is to maintain unity in the country. The second is to suppress their competitors and use their beacon-like status to promote color revolutions in other countries. However, Washington's ability in this field is weakening. Its global political influence is declining. Some of its tricks have been seen through. Whereas Washington is not able solve its own problems, its soft power now is gradually eroding. The US wants to establish a "power of example." But this is actually becoming an "example of power."