OPINIONS Watch out! 'Beautiful sight' in HK is spreading across the US

Watch out! 'Beautiful sight' in HK is spreading across the US 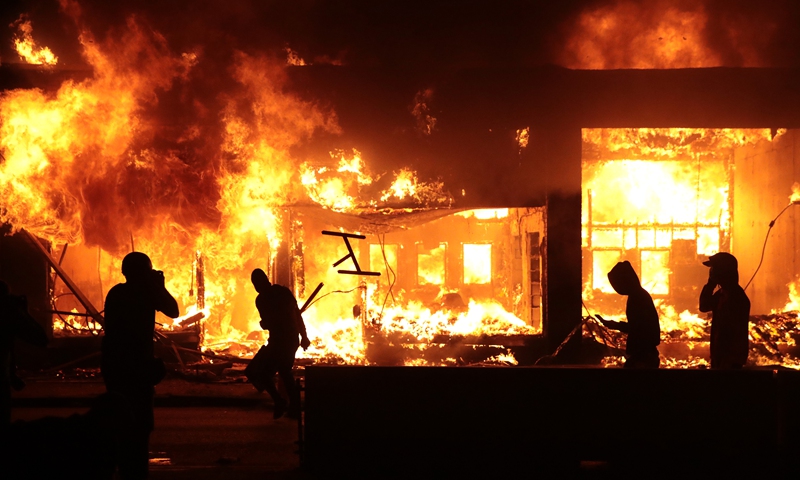 US House Speaker Nancy Pelosi once called the violent protests in Hong Kong "a beautiful sight to behold." Now, the "beautiful sight" is extending from Hong Kong to over a dozen US states. US politicians now can enjoy this sight from their own windows. Quite a few places across the US are witnessing protesters setting police stations on fire, smashing shops, blocking roads, attacking places and destroying various public facilities, as if the radical rioters in Hong Kong somehow snuck into the US and created a mess like they did last year in Hong Kong.
A quick question for Pelosi and Secretary of State Mike Pompeo: Should the Chinese government and National People's Congress issue a statement to support the protests by African-Americans and the grassroots of US society? It seems to be what Beijing should do according to the logic of Washington cheering for the rioters in Hong Kong. Otherwise, if China does not support the protests in the US, how could the latter keep playing its Hong Kong card? After all, US President Donald Trump just announced Friday to impose sanctions against China over Hong Kong affairs.
Trump really had the nerve to make the announcement when a group of furious Washington citizens were storming toward the White House, which frightened people inside leading them to erect an emergency blockade.
Washington must have failed to anticipate that retribution could come that fast. It should be thinking about it though. Racial discrimination and social inequality in the US have always been severe. Look at how many poor, ethnic minorities have died of the novel coronavirus. The odds of outbreaks of riots in the US are much higher than they are in China. How could politicians in Washington possibly define the disturbances in other countries as "beautiful sights" publicly? It is stupid to do so simply because they want to attack China. Let's wait and see which country will encounter more chaos.
The US political system is declining. Worse, the process is accelerating, while the US showed no strength to carry out substantial reforms. The grievances of the grassroots are still left unheard. Since their difficulties can hardly be resolved, those people have no alternative but to resort to extreme ways to vent their anger.
The novel coronavirus pandemic has brought fundamental impacts to the country, the US seems to have become increasingly incapable to calm the outrage from the bottom of society. US politicians need no longer enjoy the "beautiful sight" from far away, they will see it in their own cities and even find themselves among the "beautiful sight" when they don't see it coming.
The author is editor-in-chief of the Global Times.