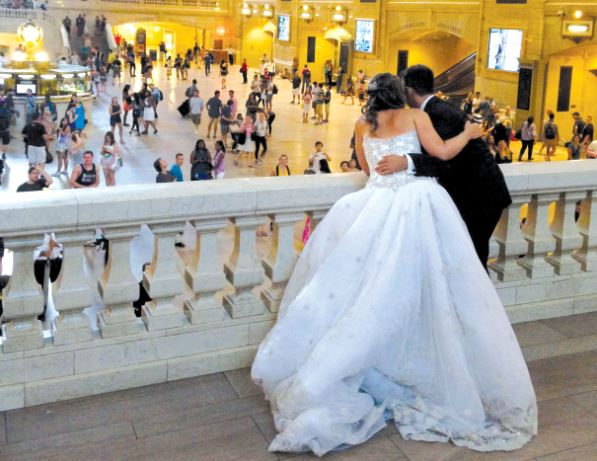 A wedding day is supposed to be about the union of two people and two families, but for too long it has become an obscene excuse to gouge people out of their hard earned money and sometimes drive them into massive debt. Even more concerning are the high wedding costs for different cultures – which sometimes dwarf the US’ average spending costs.

However, there is also a trend of people sticking to a strict budget and spending far below the average by cutting corners and using “DIY” techniques.

The worldwide wedding industry, according to a 2015 Huffington Post article, is estimated at $300 billion – with the US’ portion valued at $55 billion. Modern weddings have become less about love and more about decadence: filling massive reception halls with hundreds of guests, spending thousands on alcohol, and having over-the-top attractions like photobooths.

The high cost of marriage

According to an April Business Insider article, the average wedding cost in the US is $33,391, but that couples in New York City spend the most at $76,944 – and that’s not even including the cost of an engagement ring.

The Knot website, which did the study, found that cost correlated with the number of guests, ceremony cite, time of year, décor, and city location. It also noted that the average cost per guest is increasing and that many couples want their wedding to be unique and memorable – which sometimes results in overspending.

Therein lies the problem with the wedding industry: it preys on people who want to seem rich. In the process of wanting to throw an extravagant party, many are stuck with massive debt because they want their party to be the biggest and the best.

Nowadays, weddings seem to be less about love and more about the notion that the bride is a princess and the groom a prince. However, just because a couple spent a king’s ransom on their wedding doesn’t meant they’ll live “happily ever after” – experts say the opposite is likely to happen.

According to Emory University economics professors Andrew Francis-Tan and Hugo M Mialon: couples who spend more than $20,000 on their wedding have a 1.6 times higher likelihood of divorcing than couples that spent between $5,000 and $10,000.

The obvious problem with high wedding costs is the tension that comes with financial burdens. A $20,000 day sounds fun, but that is also years of payments that can cause fights. Financial instability is usually cited as one of the top reasons for divorce and having an extra $30,000 wedding bill can be the cause of many fights. Furthermore, experts say there is a direct link between mental health and financial health. A bride holds flowers and waits to attend a group wedding ceremony in Kashgar. (Photo: Xinhua)

Going beyond the US, different countries around the world have different expectations on what a wedding sometimes entails and that can have a profound effect on the price. In the United Arab Emirates, the average cost of a wedding is a whopping $185,000. According to Insider.com, the price is driven to avoid criticisms that could impact family honor. Furthermore, the groom’s family is responsible for this price tag at the UAE.

As of 2016, Chinese weddings, which are also paid for by the groom’s family, came in at a reasonable estimated $12,000. However, the average annual wage for urban employees during this study was $8,900. China’s wedding industry is on the rise, going from $57 billion in 2011 to $80 billion in 2016 – barely outpacing the US’ wedding industry.

According to Fortune.com, the average Indian wedding in the US is $65,000 with 500 guests. What drives the price up, beyond the extensive guest list, are the outlandish extras like horse rides and even helicopters and parachutes.

The idea of image and social standing is of major importance to overseas cultures and this alone is driving up wedding costs. While culture is obviously important and something to be proud of – it seems like society has a way of taking over an important day and making it about overindulgence.

One new trend with weddings is the idea of frugality – cutting down wedding costs while still having fun.

Many couples see the financial problems that surround the wedding industry and are choosing to follow “do-it-yourself” (DIY) attitudes and cut down on unnecessary items.

According to the Money Crashers website, some people are now choosing to cut down wedding parties to just a maid of honor and best man, cut costs with limited selection bars, cupcakes instead of wedding cakes, and booking off-season.

This way of thinking represents a good trend – which eschews the outdated notion that tens of thousands must be spent on a wedding and instead focuses on what the bride and groom really want.

Thanks to websites like Pinterest: people can have an amazing wedding while not breaking the bank because they can focus on being creative instead of seeming like royalty.

The most important part of marriage is communication and that ties into the idea of financial stability. Instead of choosing to focus on frivolities and an excessive wedding bash, it would be prudent to focus on what a marriage means instead of what it costs.

A marriage shouldn’t focus on being the biggest or the best and it definitely be held just to prove one’s social standing or wealth.

Many experts say that divorce is linked to overspending on weddings because it exemplifies the idea that a wedding is the highlight of a relationship instead of a beginning. If a couple chooses to idolize one day instead of their entire lives, then of course it will fail.

Once again, culture and traditions are good things, but there should be limits sometimes because a wedding is about two people making a union – not social standings.