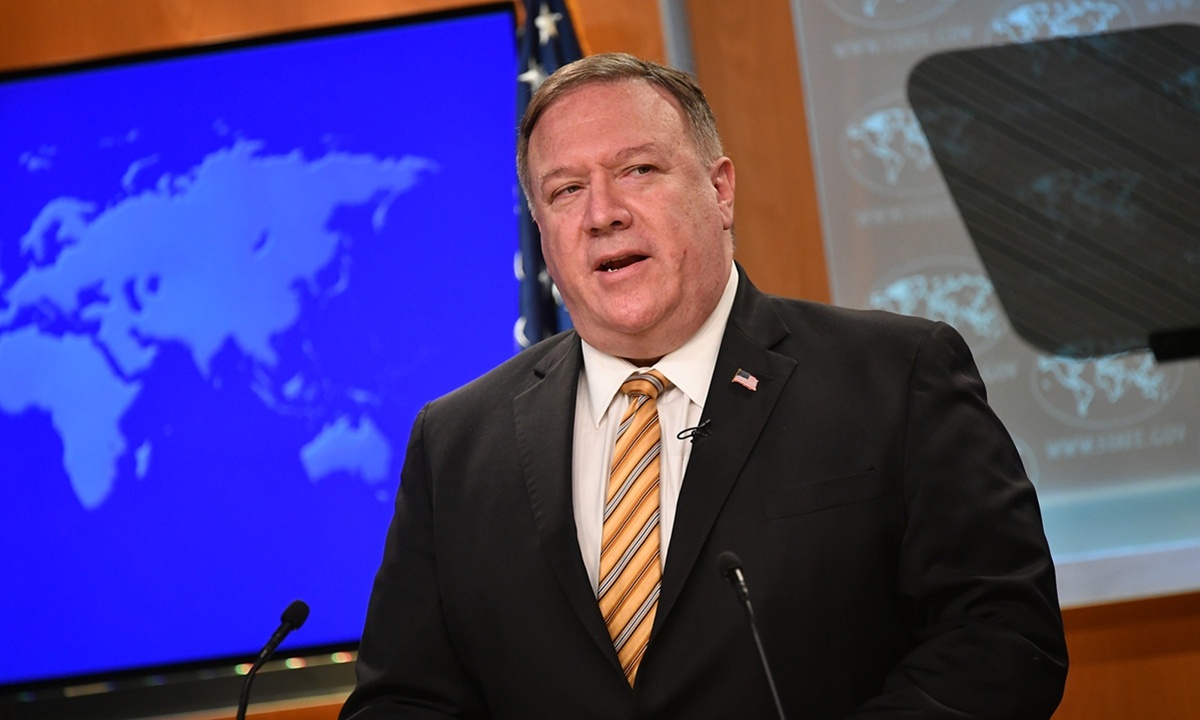 Miles Yu, the Chinese-born policy adviser to US Secretary of State Mike Pompeo, said on Tuesday in an online discussion that, "China has none that it can trust" as a true ally. He said, "Shared values — that's the foundation for multilateralism, " as if China does not share multilateral values.

People like Yu are still living in the Cold War era. Yu's speech sounds absurd. Such a person has become an actual adviser to the US secretary of state. This reflects that the US (the only superpower in the post-Cold War era) is really approaching the dusk of its hegemony.

Yu is not alone. This can be seen from the topic of the online discussion he attended - "Hong Kong - A Way Forward: How the free world will respond to Beijing's Crackdown." The phrase  "Free world" is very much an outdated term, which was only popular during the peak of the Cold War. Frankly speaking, seeing such a topic on an online discussion in 2020 is like a time and space warp.

Yu's speech shows that he and Pompeo (arguably the worst US secretary of state) are the same sort of person — naked opportunists. They both like to show off academic concepts that they do not even understand. They believe that by using professional terminology, they can varnish the appearance of their knowledge. Yu's core point is: Shared values are the basis of multilateralism, and thus he believes that only the US and allies like the UK, Japan and NATO have them. And China should have no friends worldwide. Obviously, Yu's starting point is about the so-called rule-based liberal international order.

Firstly, Yu's understanding of theory is as deviant as his judgment of the situation. Just like Pompeo, Yu is living in a world that only he understands. Many experts and researchers doubt the efficacy of the so-called rule-based liberal international order.

Secondly, the US has formed so-called friendships with other countries by forming military alliances. Anyone who has basic knowledge of history knows that military alliances are typicaly unequal treaties. The US seeks by various means to maximize its freedom of actions and its own interests. Is this a true manifestation of friends and allies? The quality of such a friendship is indeed poor.

Thirdly, the so-called rule-based liberal international order entered its peak era after the Cold War ended. US political scientist Francis Fukuyama proposed that this was "the end of history." But such blind optimism was quickly proven to be unscientific. Fukuyama said in an interview with French media Le Point in April, that neoliberalism was already dead. It seems Yu dares not face such a reality.

Fourthly, Yu has forgotten a basic fact — that the world has changed. In today's current affairs, a military alliance based on imaginary enemies against a third party will not survive. Such military alliances are beneficial only to the US. In some ways, this is similar to the New York mafia's protection rackets.

The basis of such an arrangement is not made upon so-called common values. It is being done because ofUS' panic and anxiety — Trump's team needs to find an external enemy. In this context, Yu has told the world a basic fact in a strange way: China does not have a friendship system maintained by shaping external enemies or a military alliance system like that of the US. China does not need it. The world does not need it either. Real friendship is based on mutual respect and equality.

Quite different from the US, China has no military allies. This is because China does not need them. This stems from the facts that China does not want to compete for "world hegemony" with the US. As Chinese State Councilor and Foreign Minister Wang Yi said, "The divergences or competition between the two countries are over the choices of multilateralism or unilateralism, win-win cooperation or a zero-sum game."

Obviously, Yu does not understand these facts at all.

Trump claims to really admire former US president Ronald Reagan. Yet it was Reagan who said during his presidential election in 1980, "Recession is when your neighbor loses his job. Depression is when you lose yours. And recovery is when Jimmy Carter loses his." If the US really wants to be great again, people like Yu and Pompeo should lose their jobs.