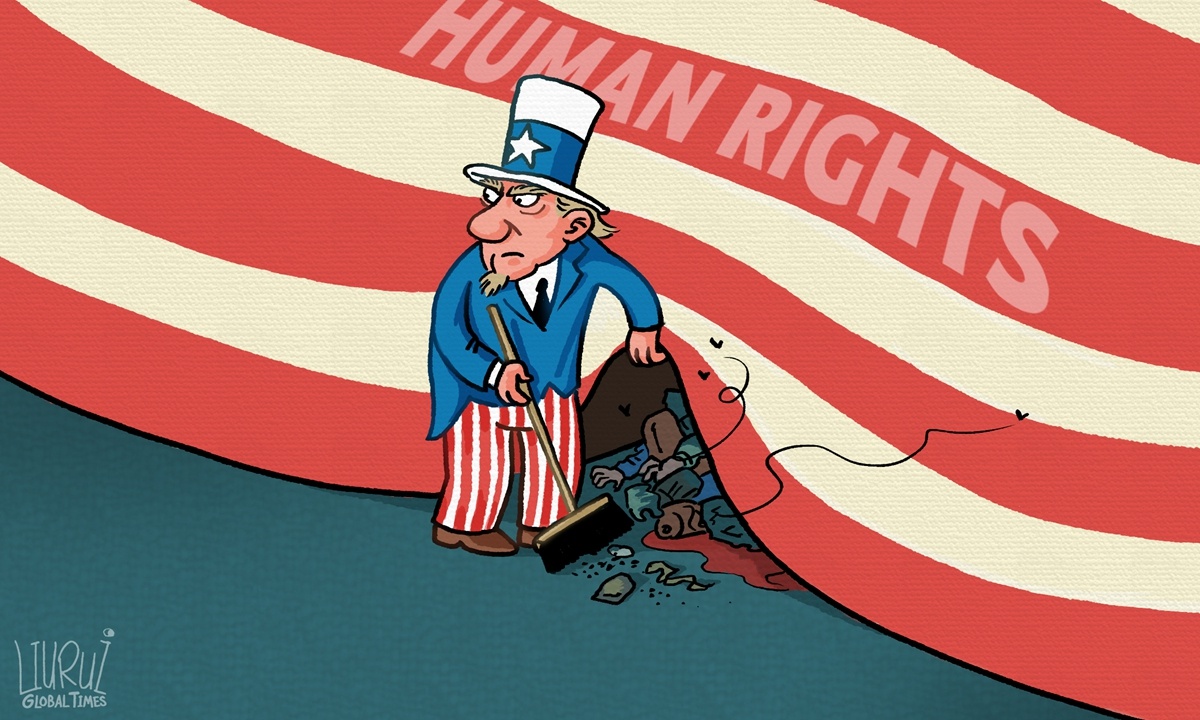 Look, Uncle Sam is busy cleaning up its own mess on human rights problems. Does the US still think it's the beacon of human rights? Illustration: GT

Fifteen countries, including China and Russia, were elected to the United Nations Human Rights Council (UNHRC) on Tuesday. For a long time, China and Russia have been smeared by some Western countries over their human rights affairs. But the election results reflect the international community's affirmation of the two countries' human rights improvement. However, unsurprisingly, the US, which always politicizes human rights affairs and sticks to double standards, has groundlessly attacked the election, accusing the UNHRC of embracing "authoritarian regimes."

Such an accusation is absurd. The vote result also demonstrates that the biased, politicized view of some US-led Western countries doesn't echo among the majority of the UNHRC. US Secretary of State Mike Pompeo talked a lot of nonsense and flaunted, "The United States is a force for good in the world, and always will be." Such rodomontade will only further humiliate the US.

The US withdrew from the UNHRC in 2018 due to what it perceived as an entrenched bias against Israel. In recent years, the US has been caught in various human rights disasters - serious racism in the US has severely harmed the rights of minorities. The protests against racism and crying for equality have been violently overwhelmed by the Trump administration - proving how hollow the US human rights claim is.

After withdrawing from authoritative institutions in the field of human rights, such a petty and hypocritical US has further intensified its criticism of others, and made irresponsible remarks. It is not hard to tell which countries are open and upright on human rights, and which adhere to double standards and spare no efforts to carry out political persecution of others.

In addition to China, there were other developing countries, such as Cuba, Pakistan, and Bolivia, elected to the council. This explicitly shows that the West cannot have a monopoly on human rights. If the human rights believed in by some Americans, who account for only a small part of the world's population, are the only standard, that would tarnish the term.

The US and many Western countries use human rights as a geopolitical tool - they don't care about the real human rights situations of developing countries. Take China's Xinjiang affairs. If the US really looks for the good of the region, it should open up its market more to products made by Xinjiang people, rather than use the issue to find fault with China. Li Haidong, a professor of American studies at China Foreign Affairs University, told the Global Times that what most countries accept and agree shall represent the opinion of the international community.

"The UN is the most authoritative organization in the world. Western countries are arrogant trying to use their own interpretation to represent the international community. Such moves are increasingly being rejected by most members of the UN," Li noted.

The US and some Western countries led by it have repeatedly urged reform of the UNHRC, trying to turn the council into their own backyard for their very own political aims. But the reality goes against them - most countries simply don't buy that.

The vote result in the UNHRC reflects the UN organization's diversity, inclusiveness, and support for multilateralism. The world doesn't need a monopoly, although the US wants to have the final say on everything, and it wants the world to operate under its will. That didn't happen in the past, and will not be possible in the future.