West could learn from East Asia’s cooperation on virus fight 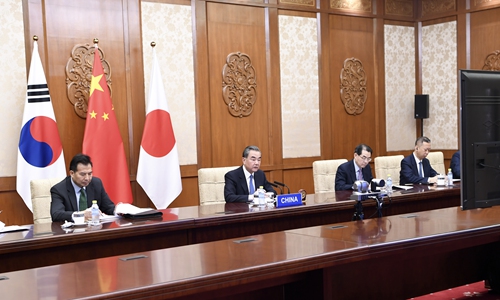 The experiences of China, South Korea and Japan in combating the COVID-19 provide valuable lessons which Western countries, especially the US, can draw from.

A special video conference between the foreign ministers of China, Japan and South Korea was held on March 20 regarding trilateral cooperation on fighting the deadly disease.

The novel coronavirus, a common foe for humanity, has affected the three East Asian countries to varying degrees. As neighbors separated only by a narrow strip of the sea, the three countries will benefit from cooperating as they battle the disease. Although scientists from China, Japan and South Korea have made progresses in research, much still remains unknown. Sharing what they know about the disease and the progress in vaccine development is conducive to their efforts in curbing the spread of the coronavirus.

The three East Asian countries have been maintaining close people-to-people exchanges, adding the need for joint prevention and control efforts. In 2018, 31 million people traveled between the three countries. Some countries outside the region overreacted to the outbreak in China and South Korea. US President Donald Trump called it a "Chinese virus," and Israel turned back a South Korea plane. The three countries are coordinating diplomatic efforts to deal with discrimination against Asians.

Although China, Japan and South Korea have had spats, frictions and even wars, cooperation has been the mainstream in their long history. During the outbreak, the three countries have been sending messages of comfort, understanding and support to each other.

Compared to Europe and the US, China, Japan and South Korea have made remarkable achievements in battling the COVID-19 due to three factors.

The governments of the three East Asian countries, especially China and South Korea, have attached great importance to fighting the disease from the very beginning. The Chinese government rolled out immediate and effective measures, including locking down cities and imposing multiple 14-day quarantines in many communities around the country. When the number of infected cases first began to soar in South Korea, President Moon Jae-in inspired his nation by visiting the city of Daegu, the country's epicenter of the outbreak.

The quality of healthcare services and health sciences in the three East Asian countries are advanced. China was able to quickly sequence the genome of the novel coronavirus, and South Korea has conducted more than 300,000 tests so far, twice as many as Italy which now has become the epicenter of the world.

Citizens of the three Asian giants are also more likely than the majority of Westerners to obey and follow their governments' recommendations and orders, which has effectively contained the outbreak.

There are many lessons the West could learn from the three East Asian countries. Many Western governments insist they can't adopt China's experience because of their different political systems, yet they say they can draw lessons from South Korea's measures, which have been quite similar to China's. This could only be because South Korea's system of governance is seen as more democratic. Conflating these two issues seems so unnecessarily hypocritical.

Western countries, especially the US, should have paid greater attention to the start of the outbreak, and their lack of urgency during the initial stage is to blame for the current severity of the situation on their soil.

These countries, most of which are developed countries with highly advanced technology, should have used their high-tech prowess to contain the outbreak. Seoul is succeeding without locking down by using surveillance-camera video, mobile phone location data and credit card purchase records to trace the movement of infected patients and establish virus transmission chains. Western countries' efforts on these fronts have been insufficient.

South Korea and Japan are on the same page in jointly dealing with the virus, despite escalating tensions in 2019, which are structural, long-term, and left over from history. However, the two countries and China still share a huge number of common interests. Protectionism, especially from the US, has given them a push to cooperate, and the coronavirus outbreak adds their willingness to collaborate. The damage being caused to three countries' economies will further drive them to deepen cooperation.