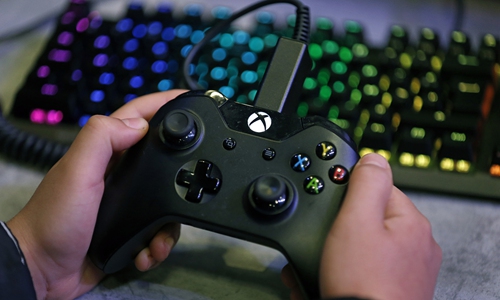 In many countries, there are laws and regulations especially aimed at protecting minors. China is no exception. However, when it comes to China, some Western media outlets always misinterpret the government's well-intentioned measures with malice.

When I read this part, I couldn't help but wonder - can gamers younger than 18, a vast majority of whom cannot pay for the pastime from their own pocket, afford to have the power to affect China's online gaming industry that "generates more than $33 billion in annual revenue and draws hundreds of millions of users?"

With the question lingering in my mind, I continued reading. Then, not surprisingly, I found words like "most heavily regulated market," "cultural values," and, of course "demonstrations in Hong Kong."

I was really impressed by Western media reporters' ability to sow discord. How have they managed to link disparate things to slander China's efforts at better governance, which is the government's true intention? They always deliberately ignore China's domestic conditions, and in this regard, it is the addiction to video games among young people; it has become universally troublesome for Chinese society, which does no good to the development of youngsters.

It is relatively easy for minors to get addicted to online games due to easy in-game wins and the lure of illusions. The temptation is also driven by the desire to find in real life what they can gain in video games. However, the addiction may derail their future life, which hasn't started yet.

In East China's Hangzhou in June 2017, a 13-year-old boy jumped off the fourth floor of a building to imitate gameplay, after an argument with his father who didn't allow him to play too much of Tencent's mobile online game Honor of Kings. Luckily, the boy survived, with fractured legs.

This was an extreme example. But it showed that video game addiction had somehow caused mental disorder among young gamers. Most teenagers are not mature enough to manage their behavior or to tell good from the bad. This is why we have laws on the protection of minors, and precisely that is why the Chinese government has framed rules to keep pace with the times - to prevent minors from losing themselves in the virtual world.

In another case that took place in 2017, a 6-year-old boy in Southwest China's Chongqing spent 10,000 yuan ($1,424) in two days on in-app purchase of virtual equipment because he wanted to be a gaming livestreamer. The case went beyond gaming addiction to one of theft as the boy stole his parents' money. Howsoever, the boy didn't realize that - a dangerous signal no one should overlook.

There are some 169 million internet users aged 6 to 18 in China, 29 million of these are younger than 10, a number nearly four times the population of New York City. If the above-mentioned cases, which have repeatedly taken place in the past few years, are found among young people under laissez-faire, who are the future of China, what will the country's future be like? Such being the case, the authorities must act before it is too late. So what is wrong with the Chinese government protecting the nation's future?

In terms of the new rules issued by China's National Press and Publication Administration, the New York Times report only underscored its limitation on minors' gaming time and in-app purchase, and said nothing about the content about promotion of companies fulfilling corporate social responsibility, better governance, and emphasis on parents' role, which shows the Chinese government's resolve to cleanse cyberspace, enhance cybersecurity and protect young people's mental and physical health.

Perhaps to some Western media outlets, everything the Chinese government does shall be opposed or criticized as long as the country is advancing, even though they must call white black.