West lecturing China on 'co-existing with virus' a disguised attack 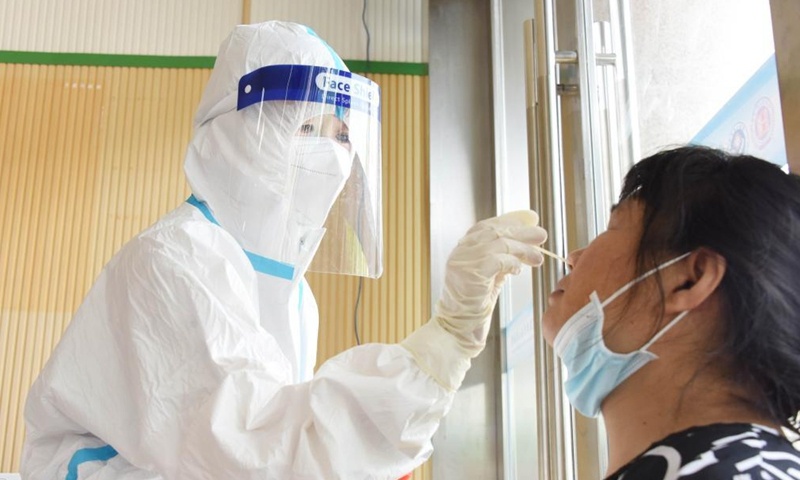 Some Western media outlets and experts recently advised China to shift its zero-tolerance COVID-19 approach to one of co-existing with the virus. If China took their suggestion, countries such as the US and the UK will become the model for China to follow.

However, the recent days have seen Western public opinion gloat over China's new COVID-19 surge. It's therefore hard for us to believe Western media and experts are offering suggestions out of goodwill.

The COVID-19 vaccines haven't stopped the virus from raging again in the US or Europe. Daily COVID-19 cases in the US have moved above 100,000 a day, climbing to a six-month high. Although the number of confirmed new COVID-19 cases has fallen in the UK over the past two weeks, many attributed this to a decline in the number of people who are taking COVID-19 tests.

Facts have proven that blindly lifting or relaxing epidemic prevention measures is one of the major reasons for the recurrence of the pandemic. So is pursuing "herd immunity" by solely relying on vaccinations, and measures that seek to "co-exist with the virus."

Such acts have also met great controversy in the Western countries. This is why they are facing a predicament of whether they should strengthen prevention or completely let the prevention measures go. But one certain thing is: the economic or social development of those countries hasn't benefited from their approach of "co-existing with the virus." But now, they are advocating for China to follow their approach.

What is being said in the West is full of contradictions. On the one hand, they claim that the Delta variant spreads quite quickly. This is supposed to be the reason to adopt stricter prevention and control measures. However, it has been used by the West to explain why China should relax its anti-epidemic measures and learn to co-exist with the virus. In a country as populous as China is, especially with high population densities in many places, the serious consequences of co-existing with the virus are unimaginable.

On the other hand, some Western media have argued that China's strict anti-epidemic measures are "costly," and "the impact on work and life for millions of people is prompting warnings." US news agency Associated Press quoted the words of Xi Chen, a health economist at the Yale School of Public Health, as saying that, "even if you can lock down all the regions in China, people might still die, and more might die due to hunger or loss of jobs." In conclusion, China needs to learn how to "allow the virus to exist."

However, China succeeded in largely containing the epidemic last year within just a few months, becoming the first country in the world to resume normal social life and economic activities. And when localized outbreaks of COVID-19 sporadically occurred in China, China sped up vaccinations while continuing the strict prevention and control measures. China's containment of the epidemic is way better than countries like the US and the UK. So is the degree of normalization for our social and economic development.

The argument of "co-existing with the virus" is obviously not convincing to China. It is like advising a top student to learn from the methodology of students that have worse grades. Such a suggestion actually has a deeper meaning.

Some Western media were anxious to see the remarkable results of China's fight against the epidemic: With no new case at all, Chinese society returned to normal, and the economy also recovered quickly. When localized outbreaks took place in China, they immediately suggested China to "co-exist with the virus," hoping that the Delta variant could continue to wreak havoc here. In their wishful thinking, it will be even better if there are mass infections and even out-of-control outbreaks.

In addition to giving China "advice" on how to deal with the virus, some in the West, on the other hand, keep smearing and attacking China over the tracing of virus origins. Their all-around attacks on China aim to end our previous success controlling this unpredictable plague.

Waving the banner of caring for China, the West, in fact, wants China to be in deep trouble. If COVID-19 causes more serious economic and social problems, the West can regain the advantage it has lost during its failed containment of the epidemic. China's path to contain COVID-19 hasn't followed the Western model. Yet it has managed to succeed. As successful as we are in terms of dealing with the epidemic, we should not let Western media fool us.