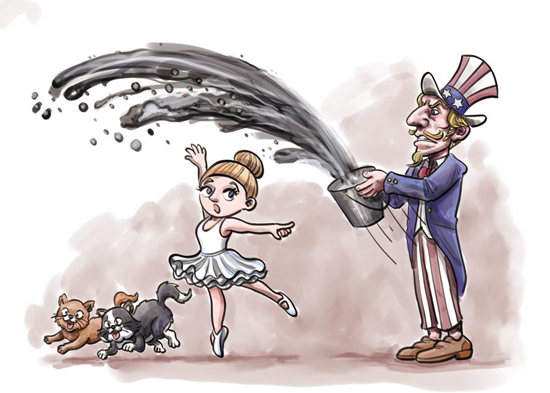 The United States-led trans-Atlantic Western bloc, by imposing stringent and indiscriminate sanctions on Russia for ordering the special military operation in Ukraine, has not only gone against the basic principles of economics and politics but also ignored humanitarian issues and social norms.

Principles that the Western society has always advocated as soft power such as presumption of innocence, protecting private property, freedom of speech and anti-politicization have been trampled by the US-led bloc. Among the sanctions, some are ludicrously targeted at Russian cats, trees and even famous composer Pyotr Tchaikovsky's classic ballet "Swan Lake". This can only be the result of delirium.

The image of Western countries as reliable trade partners and safe investment destinations has crumbled, while the price the West is paying for violating the very principles and rules it set in the first place are coming to the fore.

Apart from their economic, political and strategic missteps, the major Western powers, especially the US, are responsible for the conflict in Ukraine, which is exacting huge human and economic costs on the Ukrainian and Russian people, including forcing close to 4 million Ukrainians to flee their home.

Even after the conflict broke out, the Western powers, instead of trying to end it, have been fanning the flames by supplying weapons and military equipment, and strategic help to Ukraine and issuing harsher and harsher sanctions against Russia. By doing so, the Western leaders have made Russia's security concerns, the root cause of the tensions, a non-issue and appear to be acting tough against Moscow, in a bid to hide their political failings and gain public support at home.

For instance, 435 members will be elected to the House of Representatives and 34 to the Senate in the midterm elections in the US on Nov 8. The intensifying strife and rising contradictions in the US have created deep divisions in the country, where even the White House and Capitol Hill have lost their hallowed status, but instead of setting their own house in order, US politicians are busy triggering conflicts thousands of kilometers away in Eurasia and the Asia-Pacific.

Why? Because it is comparatively easy for them to create trouble in other countries and regions, especially take tough measures against Russia and China, and increase their bargaining chips in the midterm elections than to solve their domestic problems.

As for the United Kingdom, it has become a loyal follower of the US over the past few decades. And British Prime Minister Boris Johnson, who has been struggling to deal with the economic, political and social problems facing the country, most of which he helped create, will be more than happy to see Moscow bogged down in the conflict, because that would help him gain in popularity.

The UK ruling party's desperation and poverty of policy were further highlighted when Foreign Minister Elizabeth Truss, who didn't seem to know the Ukraine-Russia border well as evident during her talks with Russian Foreign Minister Sergey Lavrov, extended her support to British people joining the Ukrainian people against the Russians in the conflict despite the British warning Britons not to do so.

The West has forced Russia into a corner by issuing all sorts of sanctions, and is conveniently ignoring the fact that it was Western leaders who created the bloody mess that Ukraine and Russia find themselves in.

As Chinese Foreign Ministry spokesperson Hua Chunying tweeted, "When expanding NATO eastward five times to the vicinity of Russia and deploying advanced offensive strategic weapons in breach of its assurances to Russia, did the US ever think about the consequence of pushing a big country to the wall?"

The Western leaders cannot change the economic and social laws no matter how much they try to justify their sanctions. An analysis of the more than 100 sanctions issued by Washington against Moscow will give one an idea about how wrong the US has been in its assessment and how sanctions end up hurting innocent civilians and vulnerable groups the most.

Not to mention the latest rounds of unilateral sanctions are devoid of juridical logic and are leading to a global economic crisis of historic proportions, as Russia's permanent representative to the United Nations Vasily Nebenzya told a UN Security Council meeting while speaking on the food crisis threatening the world.

As the futility and the wrong (at times opposite) outcomes of their sanctions and refugee policies emerge, will the Western leaders come back to their senses?

The author is a researcher at the Chinese Academy of International Trade and Economic Cooperation.