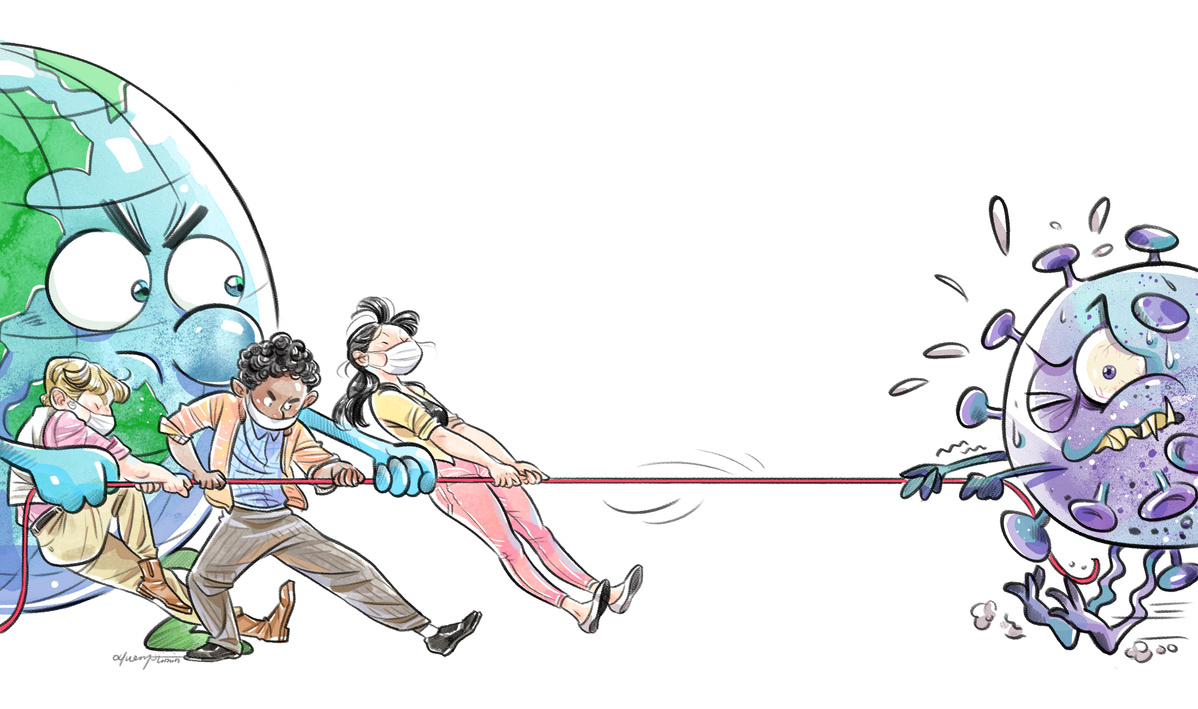 The worst crisis in our lifetime has allowed the world to see the best of China's governance system, compared with the worst of supposedly free Western democratic approaches, which mocks freedom itself and has resulted in chaos and confusion.

Incompetence, inaction, corruption and utter disregard for the common people have caused the decline of the middle class in the United States over the past two decades. The selfish "neoliberal freedom" that ruins and abuses others, while technically within the law, seems the most shameful source of pride for wealthy self-serving Western policymakers.

I am an American and have spent the past 21 years living overseas, watching China's middle-income group rise step by step, while the American middle class plunged into helplessness thanks to self-serving government leaders, and corporate and banking plutocrats.

What did the US' behemoth corporations do with the billions of dollars they saved because of the tax cuts? Did they share the wealth with their underpaid employees to improve their lot or make US society more equitable? No. Instead, they once again used the bulk of the money they saved in the tax cuts to buy back more asset-inflating stocks. It is indeed disappointing to see more of the same duplicity, the same hypocrisy, deep state chaos and incompetence.

This is a crucial juncture, though, which raises hope that common sense values such as civic duty would prevail. A global crisis like the novel coronavirus pandemic requires a competent leader to lead the world in paving the way to a better future. What we saw instead was the US administration and some media outlets launching an anti-China campaign at the beginning of March.

Although weeks later, the US president stopped using the racist term to describe the novel coronavirus, the damage had already been done as confirmed cases had begun rising rapidly because US officials ignored, even trashed, the warnings given by China and the World Health Organization regarding the virus.

Only the incompetent look for scapegoats

Stress gives rise to frustration, which leads to blaming others for one's mistakes. The greater the stress and higher the stakes, the more one needs to find a target, a scapegoat, to lay the blame on. If it's a "small" issue, people try to resolve it to relieve the stress. But if the issue is big and the stakes very high, they look for a bigger scapegoat, especially if they have not fulfilled their own responsibilities or are incompetent.

The fact is that the US government, like any other government, is made up of humans so one can understand its mistakes, delays, missteps and misunderstandings. Yet none of those should prompt it to blame China for the novel coronavirus outbreak in the US any more than it should lead China to blame the US for the H1N1 pandemic, which killed between 284,000 and 575,000 people across the world.

It's not about the racist term, which some US politicians continue to use reflecting their ignorance, but about the deeper connotation such terms carry. It's also about the sense of arrogance and moral superiority that many Western politicians have developed.

Sense of duty behind success in largely containing virus

At a time of crisis, what we should instead be looking for is a sense of sacrifice, a commitment to civic duty, for that is exactly what united the Chinese people and the government and helped them to largely contain the virus.

In contrast, the lack of discipline and unity in neoliberal governance, and the societal trends in the West reveal the worst sides of human nature－selfishness, individualism and a sense of superiority－which means the common man can't be asked to stay home and the billionaires can't be expected to help stabilize the very society where they made their wealth.

Examples of malfeasance in the West are endless. For instance, one of the themes for this year's Conservative Political Action Conference, an annual gathering of conservative activists just south of Washington, was "The Present Danger: China", a xenophobic, politically charged rallying cry if there ever was one.

Yet the chaotic, uneven response to the global health crisis shows, as one friend recently put it, "China is the only adult in the room."

Instead of good medical service, people in West get frustration

Where the West needs to find civic duty and unity, it fails. Instead we find stories like The Walking Dead actor Daniel Newman saying, on Instagram, that he spent $9,116 to be tested for novel coronavirus and couldn't even get the result. This is what US citizens get even almost three months after China informed the world about the outbreak.

And what does the US administration do to help? It pumps $1.5 trillion into Wall Street to boost stocks and only discusses how to help the people who may soon be jobless and out on the streets joining the more than 500,000 homeless people across the country.

The American Medical Association reports that US doctors are hoarding medicines touted as possible treatment for novel coronavirus by writing prescriptions for themselves and their family members.

In a recent interview, entrepreneur and investor Mark Cuban said it appears the whole of US is stressed out because of the shortage of face masks and subsequent price gouging by distributors. He also quoted New York Governor Andrew Cuomo as saying that they were paying $7 a mask rather than the 85 cents before the outbreak. "Somebody is price gouging in a national emergency－that's criminal," Cuban said.

Senator Rand Paul recently said he had tested positive for the novel coronavirus. Yet he is still out in the public and even went to the gym.

How could the gym let him in and endanger others? Is this what Western freedom is about?

The truth is, after virtually containing the virus at home, China is helping other countries with medical supplies and sharing the experience it has gathered in the fight against the virus. Everyone commits mistakes but only the wise and conscientious correct, or try to correct, them.

And now, the most important thing is to fulfill your civic duties, especially if you claim to be a representative of the people, toward your country, toward society and toward your fellow human beings.

The author is an Italian-American freelance writer and commentator. The views don't necessarily reflect those of China Daily.