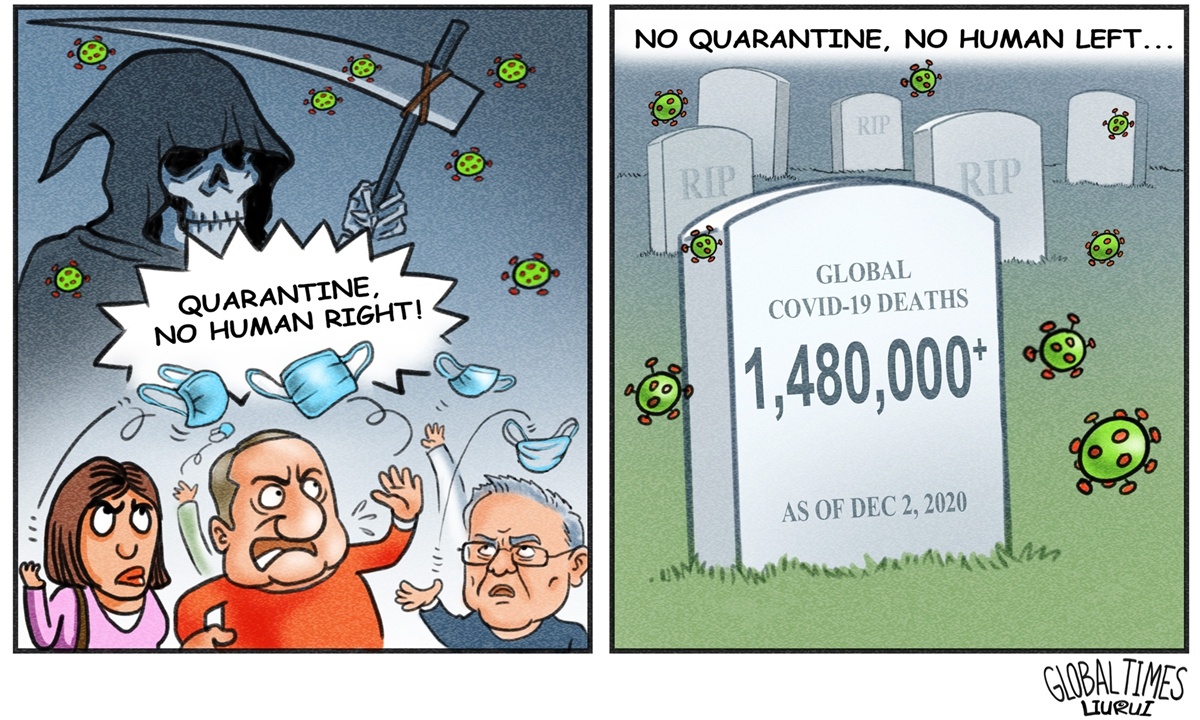 Since 2020, the year when the COVID-19 pandemic started to sweep across the world, responses taken by the US and other Western countries have left many observers startled. In just over a year, the death toll of coronavirus has surpassed 500,000 in the US - more than the number of US soldiers that died in World War I, World War II and the Vietnam War combined. The coronavirus shines "a very bright light on some of the real weaknesses and foibles in our society," said the US top infectious disease expert Anthony Fauci in an interview last April. A very bright light was also shone on the reality of "human rights" defined by the West.

At the initial stage of the COVID-19 outbreak, Western media outlets claimed that the West - at the top of the human rights hierarchy - could develop a better response mechanism to such diseases. Even some Chinese people, who have blind faith in the West's human rights, believe that such an outbreak won't occur in the West thanks to human rights and Western liberal democracy.

However, when the COVID-19 pandemic started to get rapidly out of control in the West and China reined in the virus, Beijing was still blamed by the West over human rights. This time, the West has an excuse - they values human rights, thus it is difficult to govern their people.

From being the magic wand that could be used to fight against the coronavirus, now human rights have become the reason why the West handles this situation in an outrageously ridiculous way. 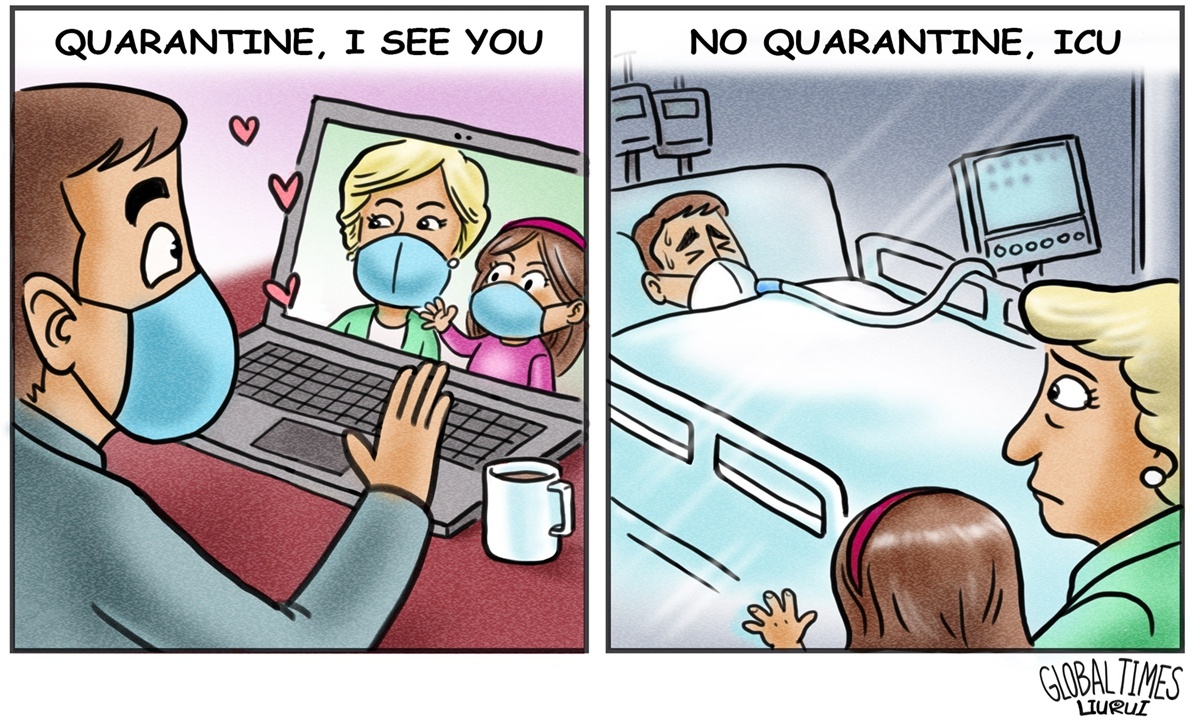 To QUARANTINE or NOT TO QUARANTINE? (Illustration: Global Times)

To some extent, such arguments imply that unless one country handles the outbreak of COVID-19 as badly as the West, and unless its death toll is as high as that of the West, this country does not have human rights, democracy or freedom.

Facing the challenge of the pandemic, if we follow the West's interpretation of freedom, democracy, and human rights, then human rights will survive, but human lives won't. How absurd and ridiculous is this? Human rights have become the reason, the excuse for the loss of human lives.

More than 2,000 years ago, Ancient Greek philosopher Aristotle, who made a huge contribution to the idea of Western democracy, stated that the city-state, or political community, exists for the sake of the good life in his book Politics. I wonder how Aristotle would feel if he knew that the current West's human rights would make so many humans die.

In the early days, the disadvantaged social groups from the developed countries of the West used the pursuit of individual rights as a legitimate claim for equal rights. However, this claim, which had been cleverly tamed and suppressed later in the West, was transformed into an effective strategic tool of foreign policy from the late 1970s and early 1980s under the background of the Cold War.

The concept of human rights has become a tool. Thus, the US has implemented one-sided emphasis on political and social rights, denying or ignoring economic and development rights. The US has harmed the basis of human rights over survival and development while vaguely talking about people's political rights. After beautifying the political practices in the US and other Western countries, Washington publicizes them in an extremely idealized way. This has become a general feature of the US and the West to turn human rights into a tool and strategy.

The US and the West's understanding and expression of human rights are mainly from their selective and subjective interpretation of history and reality. They countries attribute their advanced development at a specific historical stage to human rights, freedom and democracy. They also hint that simply by accepting and duplicating these concepts can other countries live a better life as well. The disintegration of the former Soviet Union in 1991 has greatly strengthened such an understanding.

But finally, after the impacts and challenges brought about by the uncertainties of this era of globalization, and facing the US and the West's real conditions exposed by the COVID-19, people have every reason to doubt whether or not "human rights" can lead people to a better life. US political scientist Francis Fukuyama said in an interview with French media Le Point in April 2020 that we have seen the tail end of the comet of neoliberalism. 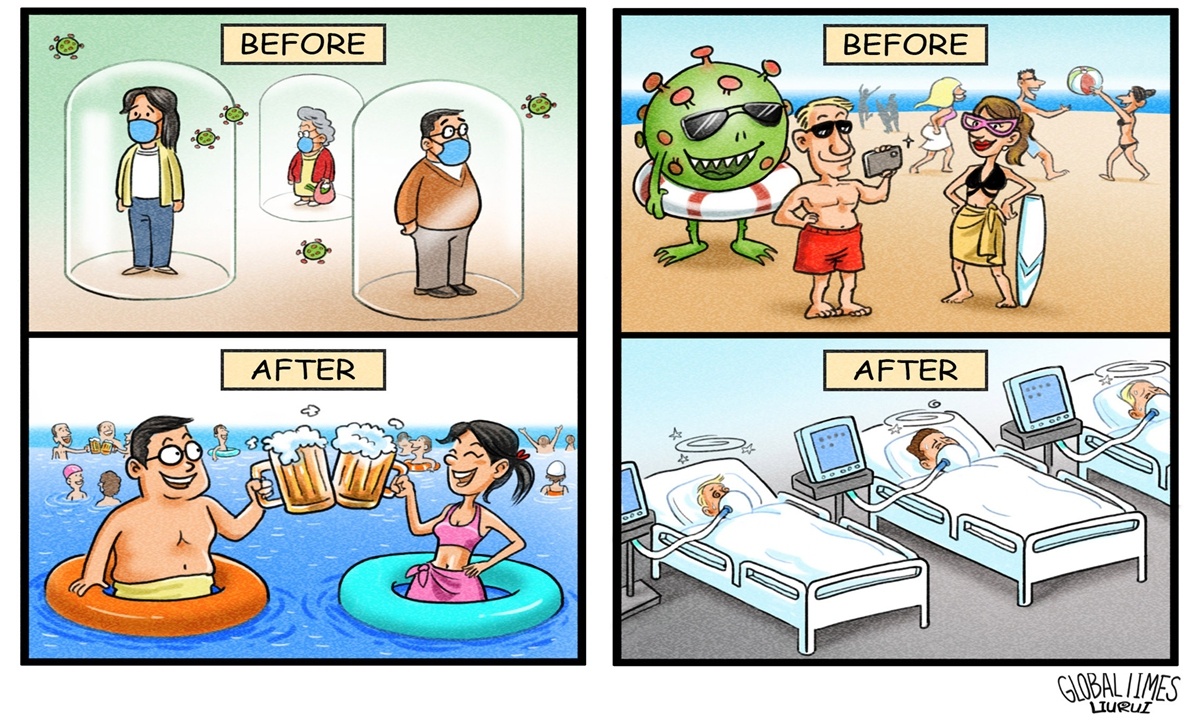 Before and After: How to battle against coronavirus. (Illustration: Global Times)

As COVID-19 continues to impact and challenge the world, it is also a historical juncture for people to deepen their understanding of globalization. Obviously, instead of saying that people worldwide are pursuing concepts such as freedom, democracy and human rights, it is better to say that through the paths and models revealed by these concepts, people are pursuing the better life that they desire.

The raging COVID-19 pandemic, the economic reconstruction and the sustainable full recovery are all reminding people that no concept of human rights can be separated from the foundation of survival and development. Human rights practices for a government should serve the people in a down-to-earth manner. This should include serving people of the country and worldwide. Otherwise, it will be the opposite of human rights, and lead the country into an awkward situation.

The author is a professor at the School of International Relations and Public Affairs of Fudan University.