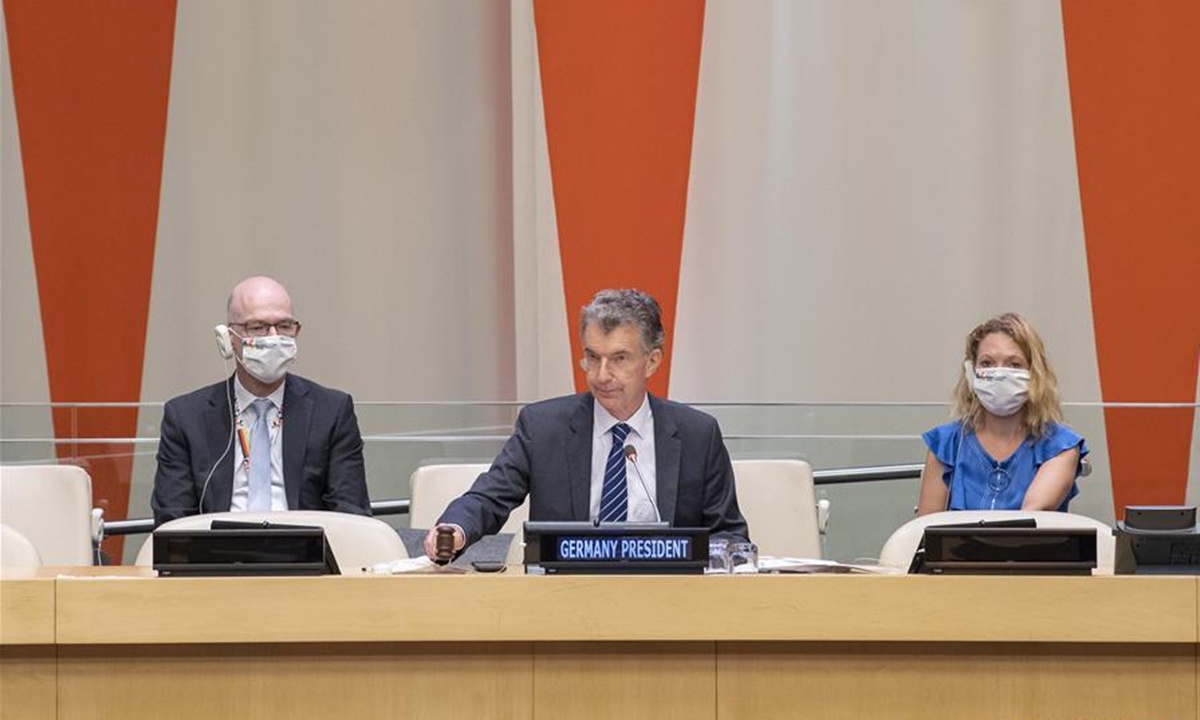 German Ambassador to the UN, Christoph Heusgen, on behalf of 39 countries, attacked China on human rights issues, especially those in the Xinjiang Uygur Autonomous Region and the Hong Kong Special Administrative Region, on Tuesday. However, on the same occasion, 45 countries and 55 countries stated their support of China in terms of Xinjiang and Hong Kong affairs respectively. The UN General Assembly witnessed a fierce debate between the West on the one side, and developing countries on the other, over human rights issues.

In May, 23 Western countries issued a joint statement condemning China's national security law for Hong Kong. This time, a few countries in Central America, South Pacific and EU members such as Bulgaria and Bosnia joined the gang. Those small countries have obviously been coerced by major Western countries.

Developing countries support China on human rights issues, because they are in a similar situation. They understand that China's human rights concepts and practices are in line with the country's reality. As a matter of fact, while the West has quite a few human rights scars itself, Western countries have wantonly criticized and smeared human rights situation in other countries to disrupt their development. This has become a severe public hazard in international politics.

At least in 2020, the title - the country with the worst human rights - must go to the US. It has done the worst in the pandemic, and almost given up the effort to protect a substantial amount of people. Over 210,000 Americans have lost their lives due to COVID-19 so far, the highest death toll from the novel coronavirus in the world. In addition, racial discrimination has spun out of control in the US this year. Just these two cases can nail this highly hypocritical Western power on the pillar of shame on human rights issues.

When the German ambassador read his speech of accusations against China, the country was in the midst of its National Day holiday. The holiday brought China the biggest boom in tourism and consumption since the global spread of the novel coronavirus, allowing the Chinese people to fully enjoy their holiday life. There were no new domestically transmitted cases, no lockdown and no panic, which is in sharp contrast to the US, where its President Donald Trump tested positive for COVID-19. How shameless are Western countries to attack China on human rights at this time!

The truth is that Xinjiang is doing well today. It has got rid of the horrible situation of frequent violent terrorist attacks in the past. There was a time when dozens, even hundreds of people were killed in terrorist attacks every year with no tourists daring to enter this region. But now, there has been no terrorist attack in more than 40 months, and Xinjiang was one of the tourist hotspots during the National Day holidays. China took necessary measures to achieve this transition, and it has done so successfully. Instead of being happy for the restoration of peace and tranquility in Xinjiang, the West criticizes the hard-won achievements in every possible way from the perspective of their values. There is no good will in them; they just cannot see that Xinjiang is getting better.

The essence of advocating human rights is to make people live well and achieve happiness. From the point of view of governance, protecting human rights is not an empty slogan or can be measured by a few separate indicators. The development of human rights can only be a systematic project, and the foundation is order. The accusations against China by the US and the West have completely deviated from the above substance and become a malicious confrontation against China's governance. Chinese people are well aware of that now. We don't believe "they are fighting for human rights for the Chinese". We are deeply disgusted by what they do.

We do not believe the US and the West really care about human rights in China. On the contrary, the last thing Western politicians, especially American politicians, accept is that lives of the Chinese people are getting better and better. They dislike China's modernization and wish that China would remain backward. Hasn't it been the core of Washington's China policy in recent years to force China to stop development?

The West should stop pretending to care about human rights in China. Such hypocrisy is disgusting.

If they are really serious about human rights, they should first bring the COVID-19 epidemic under control in their own country, so fewer people will be infected, fewer will die, and fewer will be impoverished by the epidemic. How shameful of the US to talk about human rights when it has so many deaths every day. The US should be ashamed.