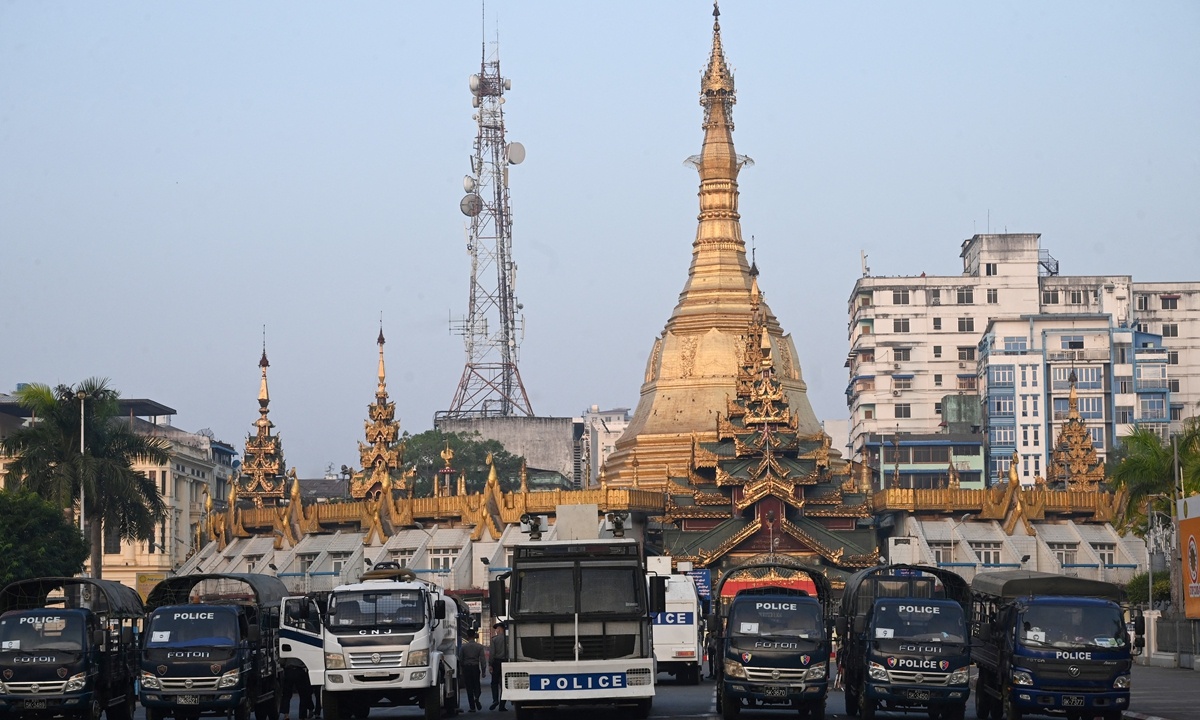 Police vehicles barricade a road outside Sule Pagoda, next to Yangon City Hall in Yangon, Myanmar on February 16. (Photo: Agencies)

After the political uproar in Myanmar, many people inside and outside the country have started to accuse China of its so-called interference in Myanmar's internal politics. Worse still, some have even said that China provided technical assistance to Myanmar's military to develop a "cyber firewall." This has been firmly refuted by Chinese Ambassador to Myanmar Chen Hai. Chinese Foreign Ministry spokesperson Hua Chunying also said on Thursday that accusations such as "China backs Myanmar upheaval" are groundless with the intention of sowing discord between China and Myanmar.

Behind these rumors, there are lies, manipulation and interference from Western countries. With their manipulation, it seems that some people in Myanmar have started to believe that China stands in line with Myanmar's military. Anti-China sentiments are also rising in the country.

Such kind of slander against China is a tactic frequently used by Western countries. They have stereotyped China, accusing Beijing of maintaining a close relationship or even supporting all the practices of the military of Myanmar. These rumors have more or less influenced Myanmar's media and public opinion. The West has maliciously tried to shift the political debate regarding Myanmar in the West to Beijing.

In the context of Myanmar's political uproar, Western countries' moves to hype up anti-China sentiments are destructive. They will worsen the country's domestic situation, and will not help Myanmar get out of its current political quagmire.

Although Myanmar's political uproar concerns the country's domestic affairs, it will undoubtedly have an impact on Myanmar's relations with neighboring countries. China, as a major neighbor, firmly believes that Myanmar's peace and stability is in line with China's interests, but political turmoil is not. China does not want the chaos in Myanmar to continue. On this basis, China hopes all parties in Myanmar can respect the rule of law and promote reconciliation within the country's legal framework.

Some Western countries have tried to use Myanmar's internal affairs to undermine the friendly cooperation between China and Myanmar.

In the past, they used the country's unstable political situation to smear China's infrastructure projects in the country. Such an attempt will never succeed because China has always played a constructive role in local society. China does not lean toward any side in Myanmar. China considers its relations with Myanmar from the perspective of the two countries' interests, instead of supporting or opposing any particular party. This is in line with Myanmar's interests and position as well, and is very different from the typical Western approach of dealing with foreign relations.

Some Western countries, the US included, believe China has taken a mild attitude toward Myanmar's upheaval. They also think China has a close relationship with Myanmar military, and are trying to prove that China is behind the country's political uproar. This is completely nonsense.

Just look at the position of some other Southeast Asian countries. Thailand and the Philippines are both ASEAN members just like Myanmar - with Bangkok and Manila showing their clear attitude of non-interference in the matter.

Thailand's Deputy Prime Minister Prawit Wongsuwon called Myanmar's situation "an internal affair" of the country. The Philippines has made similar statements. Then why has China become the only target of the US and other Western countries?

These so-called democratic countries do not consider things from Myanmar's perspectives, only from their own angles and interests. Indeed, when Western-style elections clashed with Myanmar's national conditions, "democratic" countries did not take into account local political and historical factors. The West just blindly uses tinted lenses and pushes for democratic systems in Myanmar without taking into consideration the ongoing political changes in the country.

It is groundless for the West to bleat about so-called democratic values and exert this messaging into the minds of Southeast Asian countries such as Myanmar. This same messaging strategy that puts China on the opposite side of "free" and "democratic" countries will end up in vain. China has never interfered in Myanmar's internal politics.

The situation in Myanmar can hardly be explained with existing Western models. Western countries had better make moves to maintain peace and stability in Myanmar instead of smearing China for the sake of their own interests.