OPINIONS West should not push Putin, Russia too far in Ukraine conflict

West should not push Putin, Russia too far in Ukraine conflict

On August 1, at the 10th Review Conference of the Parties to the Treaty on the Non-Proliferation of Nuclear Weapons, António Guterres, UN Secretary-General, warned that the humankind is at a time of nuclear danger not seen since the height of the Cold War. Indeed, the five months since the outbreak of the conflict between Russia and Ukraine have witnessed a rollercoaster of rhetoric about nuclear weapons and a nuclear war, firstly from Putin ordering a nuclear alert, then to senior Russian military officers and diplomats hinting on different occasions at the possibility of a nuclear war and finally back to Putin’s well-received remarks at the conference: “There can be no winners.” 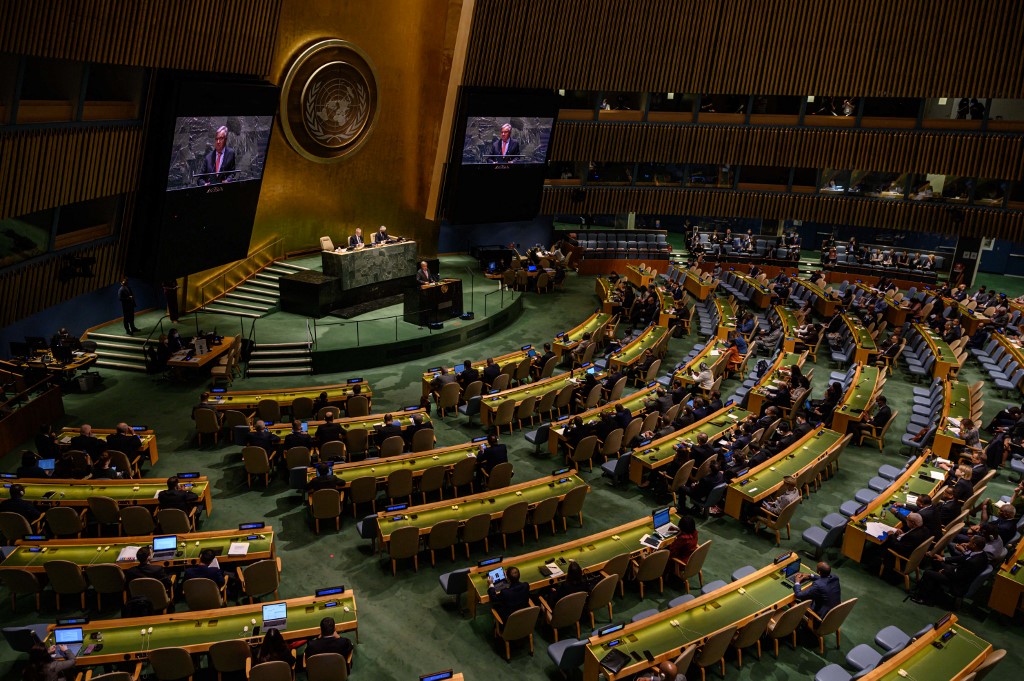 UN Secretary-General António Guterres speaks during the 2022 Review Conference of the Parties to the Treaty on the Non-Proliferation of Nuclear Weapons at the United Nations in New York City on August 1, 2022. (Photo: AFP)

The deterrent effect of nuclear weapons stems from their unbelievable destructiveness and the unbearableness of the consequences. Constant expression of one’s determination to use nuclear weapons is meant to strengthen the credibility of such deterrence with a view to controlling the situation and preventing the escalation of war. Of course its real effect depends on the enemy’s recognition of this rhetoric and a realistic assessment of various factors involved.

Western analysts are generally optimistic that there is a slim chance of Russia resorting to nuclear weapons. So far the United States and the West as a whole have been cautious in responding to Russia's nuclear remarks and have not even embarked on an exaggeration of the nuclear threat. Especially at the beginning, the United States deliberately postponed its missile flight test and did not raise the nuclear alert status accordingly, in an apparent move to avoid miscalculation or creating an atmosphere of nuclear confrontation with Russia. This was out of genuine fear of a nuclear war and circumvention of a backlash in public opinion. Therefore from the very start the US and the West's assistance to Ukraine has been limited to weapons and equipment, intelligence support, etc., which shows they have no intention of direct involvement in the war.

Nuclear weapons have enormous lethal power, but their catastrophic legal, political and humanitarian consequences pose a constraint on the choice for actual use. It is not possible for any rational decision-maker to easily come to a decision of using nuclear weapons, nor is it realistic to expect nuclear weapons to make up for a lack of conventional power.

No country has used nuclear weapons since the United States dropped atomic bombs on Hiroshima and Nagasaki in 1945. Although there were many occasions during the Cold War when a nuclear war was like an arrow on the bowstring, it was the rationality of decision makers that ultimately prevailed over the urge to use nuclear weapons, thus saving mankind from looming catastrophes.

In 1987, after decades of confrontation in the Cold War, the leaders of the United States and the former Soviet Union reached a consensus when they met in Reykjavik, the capital of Iceland: A nuclear war cannot be won, nor can it be fought. This was not a determination, nor a promise, but an acknowledgement of objective facts. However, the fact is as long as nuclear weapons exist, there will always be a chance of use. Putin’s mention of nuclear war at the conference created a hope that Russia will continue to remain rational on the issue of nuclear weapons and restrain the use of nuclear power beyond the level of deterrence. For the United States and the West as a whole, the most sensible approach is to ease the situation as much as possible, rather than adding fuel to the fire and exerting extreme such pressure on Russia as to push the latter to cross the red line on the use of nuclear weapons.

The views expressed in this article reflect those of the author, not neccessarily those of the People's Daily.