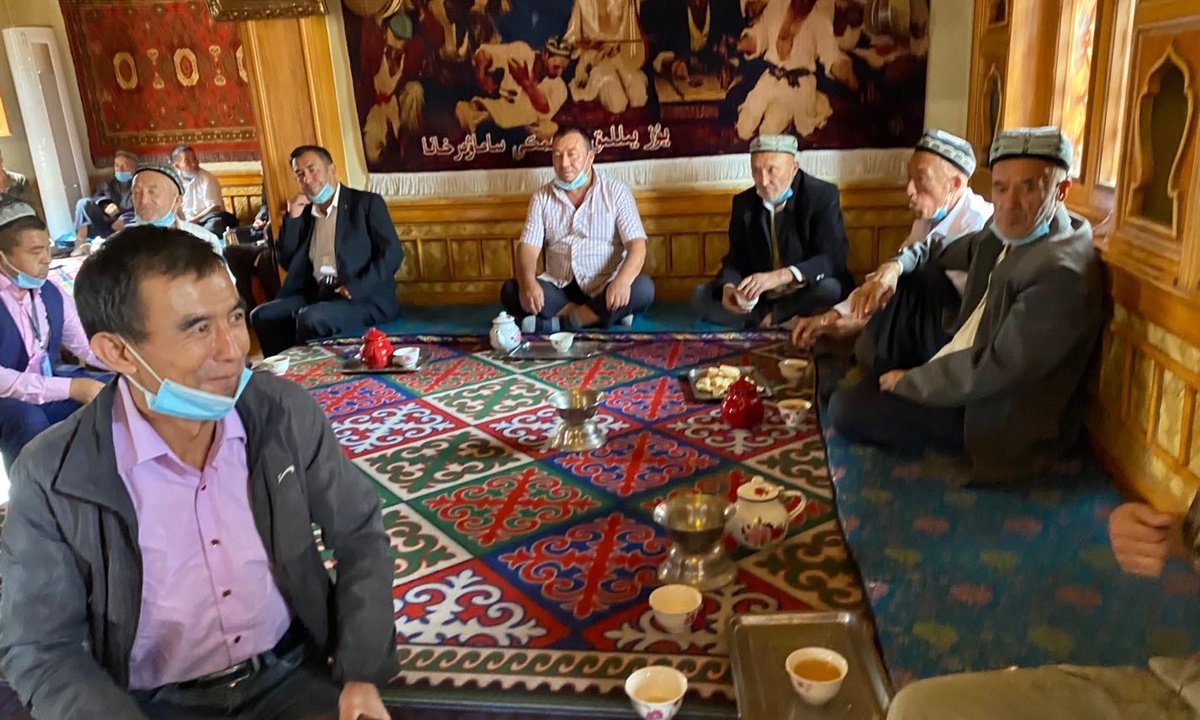 Local residents have tea in the century-old teahouse in Kashgar on September 11. Photo: Yu Jincui/GT

In a report titled "Xinjiang's System of Militarized Vocational Training Comes to Tibet" released by Jamestown Foundation on Tuesday, the US think tank claimed that China is pushing Tibetan rural laborers off the land and into "military-style" training centers, where they are turned into factory workers. The report was written by Adrian Zenz, a so-called scholar who took the lead in accusing China of "detaining" Uygurs. Zenz said turning Tibetan rural laborers into factory workers is the "most clear and targeted attack on traditional Tibetan livelihoods." Reuters corroborated Zenz's report on Tuesday by trying to further verify China's "mass labor program in Tibet."

Zenz, the so-called leading Western expert on Xinjiang who fishes for personal gain with baseless reports, is now smearing the China's Tibet Autonomous Region after he failed to achieve his goal of blackening Xinjiang. Some Western media and think tanks are now targeting Tibet, trying to smear China and sabotage China's national image in the international community. Under the guise of justice, the West fears China overcoming hardships in the process of poverty alleviation.

By releasing fabricated reports, Zenz, who was once a theology scholar, turned himself into an expert on Xinjiang and Tibet hailed by Western media. His reports are full of false information based on bias and stereotypes. He has turned himself into an academic swindler and a tool of Washington's anti-China forces.

Rural areas are the poorest in Tibet, and about 68.5 percent of ethnic Tibetan people live in rural, agricultural and pastoral land. With continuous efforts, these areas have mostly achieved road and traffic connections, bringing prosperity to industries in Tibet. According to data from Tibet's Human Resources and Social Security Department in July, some 571,000 Tibetan achieved employment transfer from agricultural rural laborer to non-agricultural rural laborer in 2019, generating 3.48 billion yuan in income. This has become a main driving force to increase Tibetan rural laborers' income.

Zenz and some Westerners must understand this: China's improvement of the ethnic Tibetan people's living standards does not conflict with respecting Tibetan traditional cultural and spiritual heritage. Just on the opposite, the best way to protect Tibet is to develop its economy and achieve poverty alleviation.

The situation is the same in Xinjiang - the vocational education and training centers have resulted in knowledge and employment skills, and helped maintain peace. Under such circumstances, some Westerners' accusations are unreasonable and immoral. Their malice is obvious.

China has explored a new path in the governance of Xinjiang, which will bring stability and prosperity to the region, while ensuring religious freedom. However, the West is generally falling into religious and ethnic conflicts. For example, the death of George Floyd triggered protests demanding racial justice in the US, and the Trump administration has failed to resolve the crisis.

The West is not qualified to accuse China of its governance in ethnic minority autonomous regions such as Xinjiang and Tibet. On the contrary, the West should learn from China's governance methods.

China's poverty alleviation campaign is a miracle, and we are confident to win the battle. Western criticism will never change China's governance in Tibet and Xinjiang, because such governance is the right and only choice. It can also be an example for other countries and regions worldwide. History will make its objective evaluation, and the standard will never be determined by Western opinion.