OPINIONS West will shed no tears for Hong Kong

West will shed no tears for Hong Kong 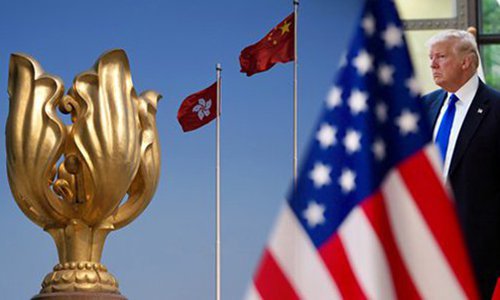 What on earth happened in Hong Kong over the past weekend? Violence has not only returned to the city, but also escalated.

However, the opposition forces in Hong Kong have been making high-profile accusations against the police for using water cannons. Several Hong Kong police drew their guns and one fired a warning shot on Sunday. Yet all that was portrayed as so-called higher violence from the police. Western media continued to cater to the opposition's claims, describing the warning shot as a sign of escalating street conflicts there, downplaying the fact that rioters' attacks against Hong Kong police are becoming fiercer.

Looking carefully at the videos, one can see a definite clue: A large swath of thugs smashed police cars while several police were inside the vehicles. The police officers who alighted from them were besieged and chased by the rioters. It was during this time that the police raised their guns and one of them fired a warning shot.

When police faces violent mobs, is firing warning shots out of self defense a restraint move or a "violent" one? If the same situation happens in New York or London, how would local police react?

So far, the clashes in Hong Kong have not led to any deaths, because police restraint and professionalism have played a key role. The Hong Kong police are under countless attacks and malicious treatment. The private information of thousands of police and their families has been exposed on the internet. While their lives are being threatened, their families are also paying a price. Is that what's supposed to happen in a modern society?

The rule of law in Hong Kong is being destroyed by some extremist forces, which is a heavy blow to the international financial center. It is easy to see that some Hongkongers are confused and being used by certain extremist forces in the city. Yet Western politicians have never condemned the mobs. Instead, they have been indiscriminately calling what happens in the city a "democratic movement." It looks like the West is supporting the Hong Kong opposition and radical protesters. They are trying to make these radical protesters the cannon fodder in the game with China.

Hong Kong has returned to China. But Washington is taking the current situation in Hong Kong as an opportunity to "seize the city back" to the West as a US strategy toward China. In the eyes of the US, if the goal cannot be achieved, then let Hong Kong spiral into chaos. Washington could, by then, hypocritically express its regrets while letting Beijing take the blame.

Many Hongkongers are confusing right from wrong while Western public opinion constantly delivers the ideological energy that the radical protesters need.

The West has shed no tears for Iraq, Syria and Ukraine, which had gone through similar hardships. Now, it is turning Hong Kong into the forefront of the struggle with China, and, as usual, they will shed no tears for the city's misery.