OPINIONS West would sacrifice rest of world for its own interests, AUKUS sets precedent

West would sacrifice rest of world for its own interests, AUKUS sets precedent 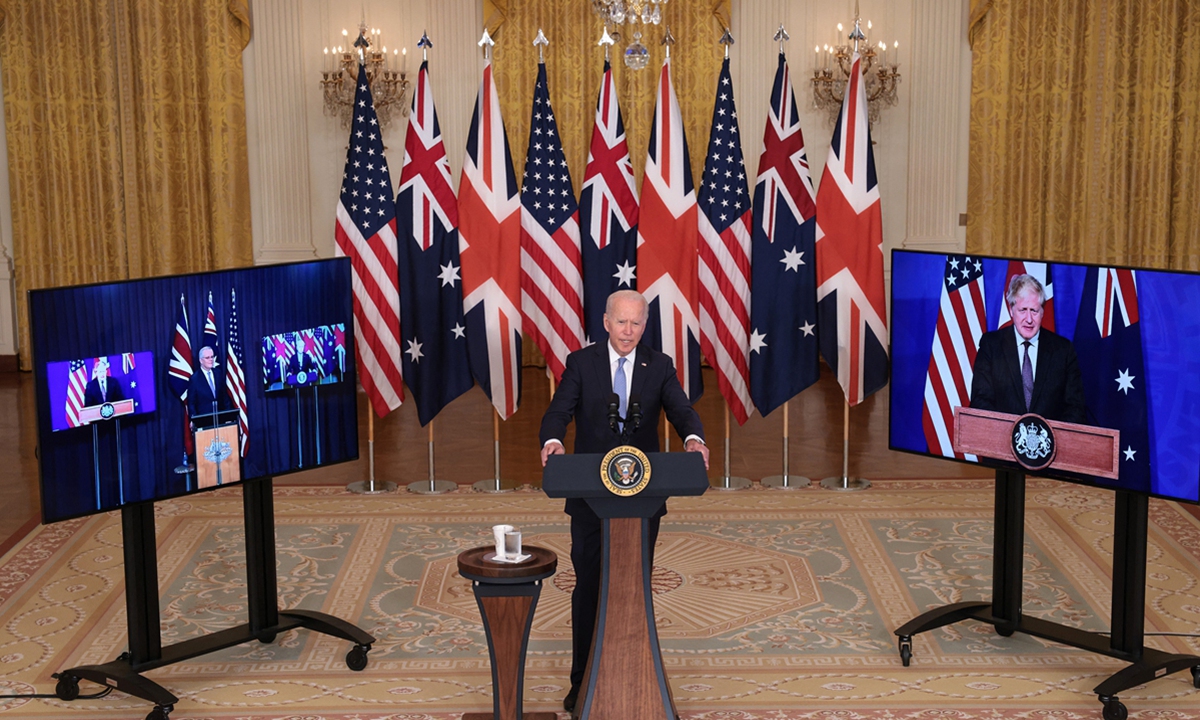 Rafael Grossi, the director general of the International Atomic Energy Agency (IAEA), said during a recent visit to Washington that other states could follow Australia's example and seek to build nuclear-powered submarines, raising serious proliferation and legal concerns.

The IAEA said in a statement on September 16 that the US, the UK and Australia, "will be 'engaging with the IAEA throughout the coming months.'" Nonetheless, the IAEA can hardly bind these three countries on this issue. Now, people have to recognize the reality: The international community is generally in a state of anarchy. If a superpower insists on violating international treaties and agreements, other countries can barely do anything.

Offering Australia a nuclear-powered submarine through AUKUS is definitely a nuclear proliferation move. But even if the IAEA opposes the decision of AUKUS, Washington can choose to ignore it. It can even pull itself out of the bloc. Both the US and the UK have signed on to the Treaty on the Non-Proliferation of Nuclear Weapons.

However, AUKUS sends another message: That many of world orders and rules dominated by the West have been violated exactly by Western countries themselves who are hypocrites. Washington always takes advantage of the international rules when they favor US interests. Yet Washington always finds various excuses to ignore the rules and justify itself when matters are not beneficial to the US.

US' moves are undoubtedly a bad example for the international community in terms of nuclear non-proliferation. Nonetheless, other countries will probably seek to emulate Australia. It is fortunate that not all major countries with nuclear weapons will act as irresponsibly as the US. For example, China and Russia are unlikely to voluntarily transfer nuclear technology to other countries. But even so, the US has dealt a heavy blow to the world's collective confidence in nuclear non-proliferation.

I was told that the US has offered to help France transfer its submarine deal originally with Australia to some other countries to mend France's losses. It is hard to predict whether the US will assist countries with nuclear-powered submarines. This is especially the case if they possess conventional submarines and thus tilt more to Washington. Whereas the power of the US is no longer virile enough to maintain the hegemony it seeks, one cannot rule out the possibility that it will disrupt the world order by means of nuclear technology transfers.

AUKUS' move has already shaken Asia's security framework. This sets the stage for undermining the authority of regional organizations such as ASEAN. If the US goes too far, the result could be worldwide chaos.

The three AUKUS nations believe they have firm control on the Western Hemisphere. Their strategic goal includes controlling the Eastern Hemisphere, but they are not capable of doing so.

When they feel they cannot reach the goal through competition, like they are doing anything against China, they would rather prefer to create chaos on China's periphery at any cost. Following this, they will try to profit from the turmoil. Australia's possession of nuclear-powered submarines is the first step in the plan. After this, it will gradually extend to the Western Pacific from Down Under.

The current global landscape is the worst it has been since Cold War.

Even though there is no major war, processes of power reshuffling are perilous times. With the rise of China, the US wants to assert its dominance. It will do so at all costs.

Therefore, the coordination of relations between China and ASEAN and other neighboring countries will become increasingly more important. Relevant countries should perceive this.

The author is a research fellow at the Chinese Academy of Social Sciences.