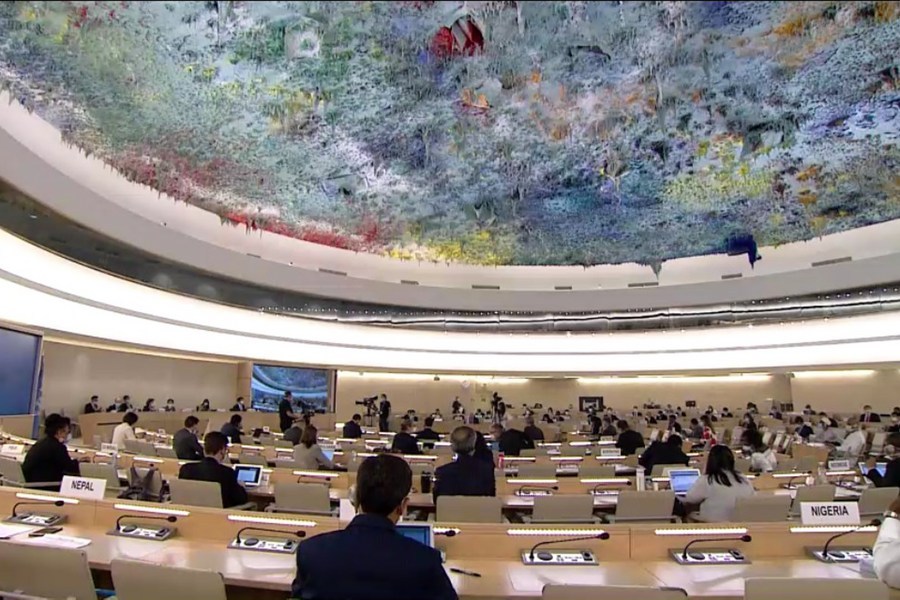 The 46th regular session of the United Nations Human Rights Council (UNHRC) came to a close on Wednesday. What the world has witnessed during the four-week conference was a record of the repeated double standards of the United States and some other Western countries.

The beacon of human rights, as they would like to call themselves, has failed to shed light upon its own weaknesses. While they tried in vain to boast their human rights superiority, China's position and achievements on human rights have won the support and recognition of many developing countries.

During the session, representatives from 116 countries and international organizations reviewed the human rights situation in the United States and made 347 recommendations on human rights improvement, covering such issues as minority oppression, life and health deprivations and gun violence.

Some representatives pointed out that the United States, in pursuit of "vaccine nationalism," has hoarded vaccines far in excess of its population's needs in the pandemic, and refused to share them with other countries, including its allies.

During the session, a long list of countries urged the United States, Australia, Canada and the European Union to address issues including racism, discrimination, police violence and hate crimes targeted at ethnic minorities.

A representative from the United States admitted that some Americans, especially those in black communities, have lost confidence in the country's judicial system as a result of the irresponsibility of some U.S. police officers.

Ironically, some Western countries, the United States in particular, played down or totally dismissed their own human rights violations while launching groundless attacks against China over issues related to Xinjiang and Hong Kong under the guise of democracy and human rights. Such blatant double standards are astonishing and outrageous.

China has responded to the ill-founded accusations with sufficient facts and reason.

Addressing a high-level meeting at the session, Chinese State Councilor and Foreign Minister Wang Yi said Xinjiang-related issues are in essence about countering violent terrorism and separatism, adding that there has never been so-called "genocide," "forced labor" or "religious oppression" in Xinjiang.

The drama of smearing China orchestrated by a few Western countries has to come to an end. Gone are the days when they managed to meddle in China's internal affairs with a few made-up stories and rampant lies.

On March 12, Cuba delivered a joint statement on behalf of 64 countries, commending the people-centered philosophy that the Chinese government pursues and achievements that have been made in China's human rights cause, and reiterating that Xinjiang is an inseparable part of China.

On March 5, Belarus delivered a joint speech on behalf of 71 countries at the 46th UNHRC session, emphasizing that Hong Kong affairs are China's internal affairs and should not be interfered in by external forces.

Also in recent days, a number of countries have expressed their firm support for China on Xinjiang-related and Hong Kong-related issues in their individual statements delivered at the session.

The manipulation of a few Western countries simply cannot represent the international community.

Over the years, China has adhered to a people-centered concept of human rights and blazed a path of human rights development that suits China's national conditions and needs.

Just as Ambassador Chen Xu, China's permanent representative to the UN Office in Geneva has said, the 1.4 billion Chinese people, as masters of their country, are living a safe and happy life, enjoying equity, justice, development and prosperity.

The international community has a fair judgement of who is violating human rights and who is upholding them. Human rights are not the exclusive rights of some countries, and China's human rights achievements have to be recognized.

It is time that those countries abide by the purposes and principles of the UN Charter, respect the path of human rights development chosen by others, stop smearing other countries, and take their own problems seriously.

It is hoped that all countries can join efforts to enhance the exchange and cooperation on human rights based on equality and mutual respect, so as to work together for the healthy development of human rights in the world.