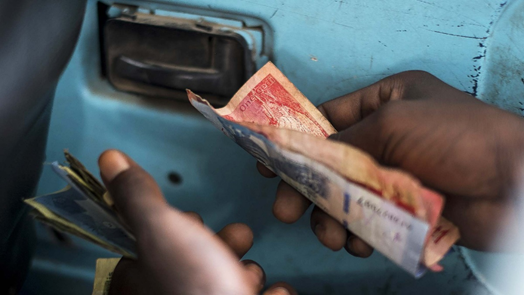 Before creating an ambiguous concept “Debt Diplomacy” in a master degree essay at Harvard University Kennedy School, we should have a clear mind on African’s long-lasting debt problems first. Since the end of the World War II, who is standing behind the African mounting debt crisis and what could be the solution?

The western media and some politicians created the concept “Debt Diplomacy” by accusing China of “miring nations in debt” and “undercutting their sovereignty.”

But is China the largest debt owner of Africa?

Scale of Sub-Saharan Africa (SSA) debt increased quickly since its sovereign Eurobond issued in 2006. Data from the World Bank shows that African external debt reached to US dollar 6.01 trillion in 2016. Research from SAIS and China Africa Research Initiative at Johns Hopkins University shows that China has provided US dollar 114.4 billion in loans to Africa from 2000-2016 roughly, which accounts for 1.8 percent of African total external debt.

Taking some Heavily Indebted Poor Countries (HIPC) like the Republic of the Congo and Ghana as an example, the two countries have received a large number of loans from China by 2016. While in Ghana’s 213.9 billion US dollars external debt, less than 1.5 percent owns by China. In the Republic of the Congo’s 38.3 billion US dollars external debt, Chinese loans only account for 9.4 percent.

Some analysts may say that China owns much of Kenyan external debt. While data proves that the profitable Mombasa-Nairobi railway financed by Chinese loans has lift up 1.5 percent of Kenyan GDP growth rate. 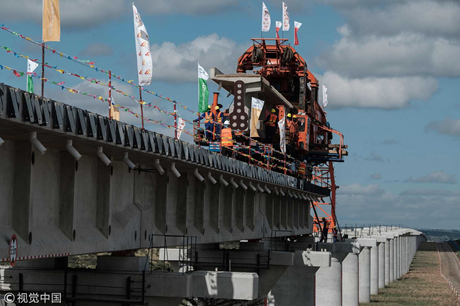 A picture taken on June 23, 2018, shows the construction site of Standard Gauge Railway (SGR) during the Presidential Inspection of the SGR Nairobi-Naivasha Phase 2A project in Nairobi, Kenya. /VCG Photo. (Photo: CGTN)

Then who owns more of African debt?

Besides commercial loans through domestic commercial banks, the Eurobond note, a major source of income for many African countries has grown rapidly between 2007 and 2016. According to IMF’s report, African governments issued a record 7.5 billion US dollars in sovereign bonds in 2017, ten times more than in 2016.

Zambia issued three Eurobonds between 2012 and 2015 with a total amount of 3 billion US dollars. Ghana’s ten-year bonds worth 750 million US dollars matured in 2017. Now, around 36 percent of African debt owned by IMF and the World Bank. These multilateral financial institutions and other giant investors in Europe and the US have stronger leverage.

To implement the national transformation plans, many African countries turn to the capital market to pursue funds. Lending agencies in Europe and the US also intend to pursue high return in Africa since the quantitative easing policy has created large liquidity in recent years.

While a sharp drop in international commodity prices has weakened African export. Shortage of hard currency, local currency devaluation, and mounting debt is squeezing their room to get more loans. The IMF and the World Bank tend to impose a financial blockade on those countries’ budget borrowing and push structural reforms. 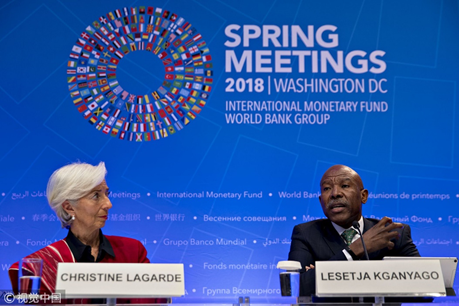 Lesetja Kganyago, the governor of South Africa's reserve bank, speaks as Christine Lagarde, the managing director of the International Monetary Fund (IMF), listens at the spring meetings of the IMF and World Bank in Washington, April 21, 2018. /VCG Photo. (Photo: CGTN) But does that really help?

Joseph Stiglitz, the ex-chief economist of the World Bank, talked about the inside world of the IMF, the World Bank, and the bank’s 51 percent owner, the US Treasury on the Observer in the UK in 2001. To get financial assistance and debt relief, those indebted countries have to adopt the four-steps guidance. Finally, it became a story of wealth stolen and “poverty trap.”

Step one is privatization, which equals to corruption in general. The multimillions dollars’ worth of state-owned assets sold to foreign oligarchs and domestic “private owners” at unexpected low prices. Foreign enterprise can easily control the abundant natural resources. In the 1995 Russian sell-off, the US-backed oligarchs stripped Russia's industrial assets.

Step two is the capital market liberalization, which allows free inflow and outflow of capital even hot money. It seems that will lower transaction cost and revive the sluggish economy, while the common result is that funds will be gradually drained out of those in debt economies.

Then step three is market-based pricing. In shorts words, cut subsidies and raising prices on food, water and cooking gas, which negatively influenced ordinary people’s livelihood. It will increase social uncertainty and instability. Joseph Stiglitz calls it “the IMF riot.”

The final step is to impose the “further free trade and equal market access.” Is that fair and free? Taking an example, Africa’s vulnerable agriculture is competing with highly subsidized European farmers and invisible trade barriers. While the African market is more open to the European agriculture products. It leads bankruptcy of small business in Africa. Moreover, debt owners will force those countries to further open African domestic market and cut subsidies to continue this “fair trade” across the Mediterranean Sea and the Atlantic Ocean.

Will industrialization be a good solution?

Lack of finance is always the bottleneck for African development. While continue to borrow money is definitely not a sustainable solution since it will put heavy burdens on the budget sheet. 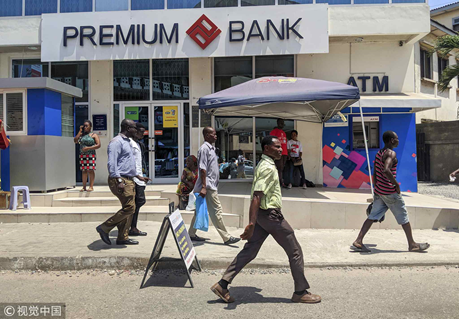 Countries like Ethiopia, Uganda and Rwanda are trying to move up the value chain and add value to raw materials through industrialization. Industrialization could attract more foreign direct investment which will not be part of national debt. In contrast, it can create more jobs, promote capacity building and create more previous hard currency for the economy. Developing import substitution manufacturing can also save the previous foreign reserve.

Development path at Mauritius and Botswana set good examples for other African countries.  To implement industrialization, invest in the people through education is prioritized. Business-friendly policies like a clearly-defined regulation in the legal and tax framework are also needed.

At present, transitioning towards industrialization has been adopted in the African Union’s Agenda 2063 and many African countries national development plan. It is the right time for Africa and other partners to join the implementation fully.