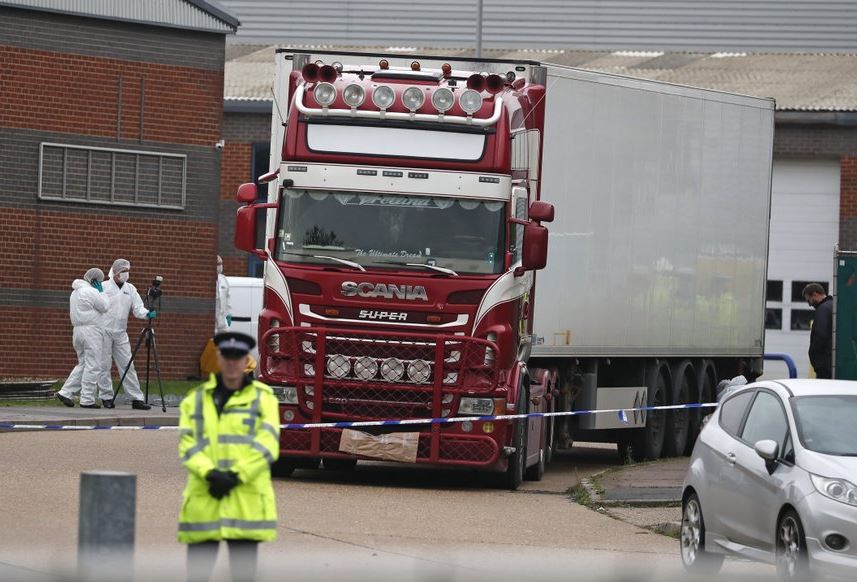 Police forensic officers attend the scene after a truck was found to contain dead bodies, in Thurrock, South England on Oct. 23, 2019. (Photo: AP)

British police have confirmed that all 39 victims found dead in a refrigerated truck in southeast England last month were Vietnamese nationals. It is heartbreaking to learn that those dream-chasers, mostly young people, had their journeys ended prematurely in a frozen, dark compartment in the back of a truck.

This is the second time that the world has been shocked by a human trafficking disaster in the UK after 58 Chinese lost their lives in a shipping container in the port city of Dover 19 years ago. While UK and Vietnamese police are being urged to bring swift justice to greedy people smugglers, the role the media plays in human trafficking tragedies has been constantly ignored.

When images of fancy homes and shiny cars in the media dazzle eyes around the world creating perceptions that those possessions are part and parcel of western life, it creates illusions that anyone can find his or her paradise in the US or UK as long as they can cross borders and settle down with whatever identity they choose. Sadly, the reality could not be further from the truth.

In developed countries like the US, UK, Australia and Canada, the primary language is English. Non-native speakers face many communication and cultural challenges. For any migrant who wants to start a new life, the language barrier and cultural adaptations are the Battle of Thermopylae that only a handful of them can claim victory in.

No matter how many inspirational stories in the media portray someone as a darling of fate, the cold, hard reality is that many came to those countries via human trafficking and had their dreams dashed by landing low-paying jobs like dishwashers or farm workers. For those who barely keep their heads above water to survive, their stories are often marginalized by media reports, and their sufferings are deemed as a stain on a colorful canvas.

There is no official data specifically on the poverty rate of undocumented immigrants in the US, but it is estimated that in general the poverty rate among them is 30 percent and they are nearly twice as likely as the overall US population to be food insecure.

In an age when the media is dominated by celebrities and entertainment tidbits, the news focuses the public's attention on certain personalities and issues. However, some harsh realities are often screened out.

Many undocumented immigrants not only live in poverty, they also lack health insurance and job protection support. They are exposed to unsafe working conditions and risk being detained and deported. Deportation could be disastrous for them since a lot of individuals pay large sums of money to human traffickers to smuggle them somewhere illegally. In the UK case, a Vietnamese victim paid people smugglers £30,000 for travel to the country.

For the 39 victims, mostly from Ha Tinh and Nghe An province, the journey to the UK was costly and risky, but they believed the risks would yield greater returns. Perhaps what the media failed to educate them on is that the UK is struggling to work out how to deal with the problem of mass migration.

UK Prime Minister Boris Johnson has vowed to adopt a so-called Australian-style points system to update the current immigration policies. According to Johnson, the UK needs to be more open to highly skilled immigrants and tougher on those who “abuse” the UK’s “hospitality.”

The US Republican government is also mulling tougher policies to control the number of immigrants and asylum seekers who come across the US-Mexico border.

As Asia has gradually become globalized, western culture has put down roots in many countries like Vietnam and China. As a result, western lifestyle and the wealth associated with it are also widely promoted by domestic media.

The media landscape has been traumatically changed by the fresh impetus of globalization. However, as Henry David Thoreau said, “It's not what you look at that matters, it's what you see.”