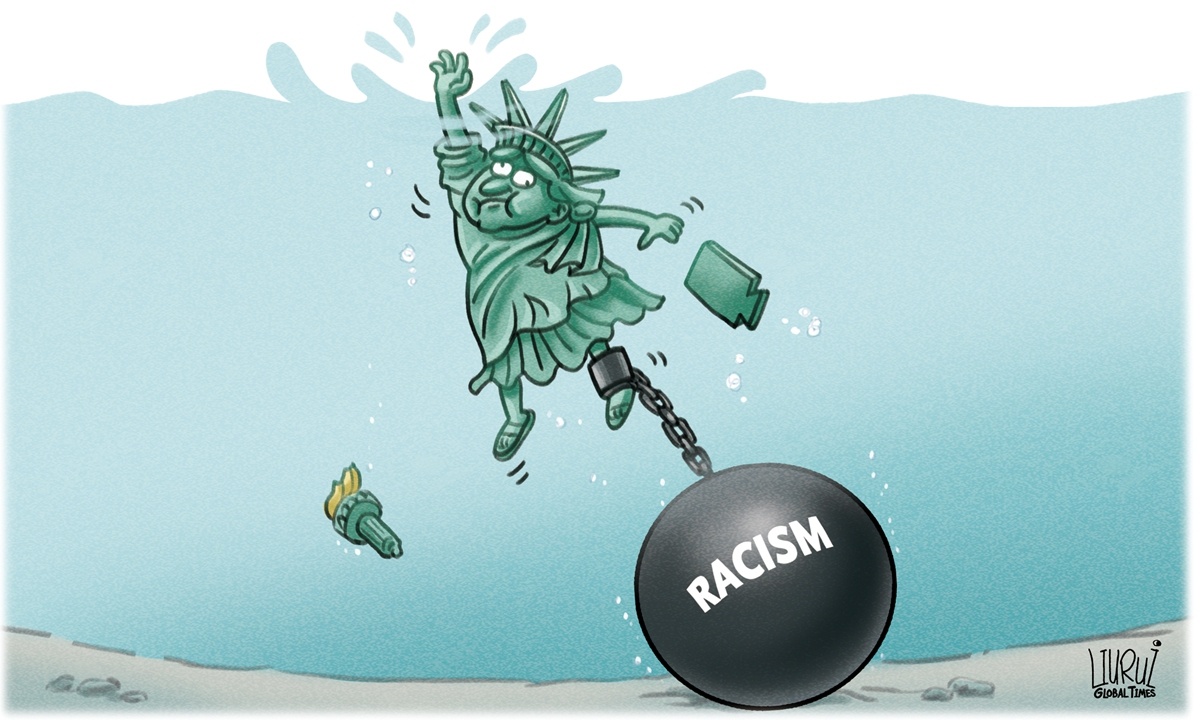 US opinion website salon.com published an article on Sunday entitled "China eradicated COVID-19 within months. Why won't America learn from them?" The article quoted Dr Richard Horton, editor-in-chief of the prestigious medical journal The Lancet, who said that "when I see and hear Western political leaders vilifying China in the way that they do, I think that there is a dimension of Sinophobia, even racism, against the Chinese."

Racism and white supremacy have been deeply rooted in the US and Western societies. When they see the different results of China's and West's COVID-19 fights, their psychology of racism has been further instigated. The West has been unwilling to accept that China has done a better job in containing the epidemic. Desperately, turning to racism seems to be Western countries' only way out.

This can also be seen as white population's discrimination against Chinese people and other Asian people. For example, former US president Donald Trump repeatedly and deliberately used the term "China virus" and the Wall Street Journal used the phrase "real sick man of Asia" to describe China.

Worse, such Western racism has led to violence. There have even been street attacks against Asian people in the US and the UK. These facts have all aroused Chinese people's anger.

Asian people have suffered from severe stigmatization during the COVID-19 pandemic. This is the crisis of the so-called Western human rights. The pandemic has completely exposed some Western elites' views of the differences in skin color.

The US-led West has instigated xenophobia during the pandemic, especially hatred and fear against Chinese people. In fact, the COVID-19 has nothing to do with race. However, some Western elites have deliberately put the blame on another race which is also susceptible to the coronavirus just as they are. This is not only wrong, but also morally shameful.

Hatred of Asian people has had a long history in some Western countries. The current situation reminds many Chinese people of the similar Western sentiment during the SARS outbreak in 2003 and even the Yellow Peril stereotype. After the COVID-19 outbreak, the US-led Western countries have become more and more like a racist gang. They have been boasting about their so-called human rights and equality, but they have not made any progress over the past century, and have even shown an obvious retrogression.

Racism is a major and long-lasting feature of many Western countries, especially the US. COVID-19 has also exposed a systematic racial discrimination in the West. And to some extent, such racism has also dragged down the West's own COVID-19 fight. For example, out of the ugly mentality such as white supremacy, it seems the US has absolutely no interest in learning from China's experience. As Horton said, American leaders could have contacted plenty of Chinese scientists for help, but they often failed to do so. Such a mind-set will eventually backfire on Western society and make it pay a heavy price.

Such hatred of China and other Asian countries in the US and Western countries show their mentality of maintaining Western hegemony.

These countries have tried to seize every opportunity to attack a different race, making effort to dominate the world. With the US at the center, many Western countries have formed a racist mafia-styled community. The threat posed by such racial discrimination is dangerous. The West, making use of the COVID-19 pandemic, has used racism to keep a distance from China.

After the COVID-19, there may still be other serious pandemics in the future. Hyping racism will only prevent countries worldwide from cooperating and being united in the face of non-traditional security threats. If the US and other Western countries fail to draw a lesson from this, they will only be degraded to a stumbling stone that hinders the development and progress of the human race.