OPINIONS Westerners should embrace use of masks

Westerners should embrace use of masks 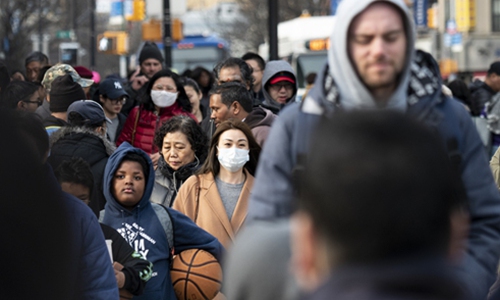 People wear face masks as they walk down a street in the Flushing area of Queens on March 2 in New York City. (Photo: AFP)

American society's attitude toward whether people should wear masks to prevent the spread of the coronavirus epidemic is changing. The US Centers for Disease Control and Prevention is reportedly reviewing its guidelines on wearing masks and recommendations that masks are worn in public might be included. Los Angeles Mayor Eric Garcetti on Wednesday advised everyone in the city to wear non-medical face coverings when going out. He is the first American mayor to make such an appeal.

Such changes are welcome. Since the outbreak of the coronavirus epidemic, many Western medical staff and institutions have insisted there is no need for healthy people to wear masks in public. They only recommend the use of masks by medical workers, patients and those who look after patients. This has raised several questions: Since masks are effective in protecting medical workers, why do ordinary people not need them? Where is the boundary?

Finally, US and European societies have paid attention to whether Asians' willingness to wear masks has in part contributed to China and other Asian countries' effective job in containing the epidemic. Some medical professionals in the US and Europe have called on the public to change their perception of masks. Mainstream media outlets such as The New York Times and CNN also published articles about the role of masks in Asians' epidemic fight.

Masks can help prevent people from being infected. The suggestion is scientific and Asian countries have a lot of experience in this regard. However, excessive cultural confidence has hindered the US and European countries from giving due attention to the experience of their Asian counterparts.

Now, some people in these countries have felt regret. An article on CNN asked how many infections might have been avoided if people were asked to wear masks from January. The epidemic started in South Korea, Japan, and European countries such as Italy, almost at the same time. Despite similar social structures in these countries, why has the situation in South Korea and Japan not been worse? One of the most important reasons is that people in the two countries don't refuse masks.

Besides not trusting Asian experiences, the masks' role was also downplayed because of a shortage. Strengthening people's stereotyped perceptions about masks could help reduce the use of masks so that more can be reserved for medical staff.

However, the situation is rapidly deteriorating. You will suffer losses if rules are not obeyed. The huge loss of lives has forced people to reflect on wearing masks. It's foreseeable that changes in appearances of cities in the US and Europe will soon take place. More and more people will wear masks to protect themselves in supermarkets or on subways.

This is a lesson. Modern science including modern medicine originates in the West. Chinese people worshipped "Mr. Sai" of the West, a term referring to science, more than 100 years ago. However, when it comes to wearing masks, the West has failed to meet the demands of the epidemic fight and acted against science. More reflections should be made.

The West should attach greater importance to and respect the experiences of non-Western societies and be modest culturally and politically. The Western elites cannot view the world from a West-centric perspective anymore. As a matter of fact, the West has no longer been at the forefront of many human explorations. Westerners should face up to this change and keep pace with the times, which will be beneficial and important to them.